The Middle of Amber 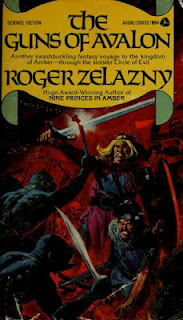 I was going to write a blog post suggesting that people support the Lords of Gossamer & Shadow Kickstarter that is taking up where the Amber rpg by Eric Wujcik left off. The Kickstarter has about 19 hours to go, the game should carry on for years. And maybe I am still writing that blog. But I'm shifting the focus off the new game that I-am-looking-forward-to-and-think-you-should-support .... back towards the Roger Zelazny stories that created the path for the game.

By high school, Zelazny was my favorite author. The extent to which I loved his work has clouded my memory of how I first encountered him. It wasn't through Jack of Shadows or Lord of Light or Nine Princes in Amber. It was through The Guns of Avalon, bought second-hand in a musty used paperback store built into a weird indoor-outdoor mall that would soon go out of business when I was in 7th grade and my family had just moved out of the Army and into Oregon.

If you're familiar with Zelazny's work, you know that The Guns of Avalon is the second book in the Amber series. I missed that. I liked the cover illustration of two warriors battling chaotic hordes. Well, they looked like orcs. Inside it didn't go quite the way I'd expected. By that time I'd read the Lord of the Rings and Watership Down and Starship Troopers, but it's possible that The Guns of Avalon was the first troublesomely adult novel I'd read. The demon knocks on the window and he goes ahead and invites it in? The girl he fenced with and then slept with may be another demon who killed off the kindly family? He's walking through realities and getting stronger all the time? And now we're using guns in fantasy worlds? What?

I wasn't ready to deal with a story this loaded.

Skip forward a year, maybe less. I'm in Gandalf's Den and there's a big display of Zelazny books, a series of books in a new black cover design I like a lot. I'm looking at the books and I see something called The Guns of Avalon. Wait. This is the book I have with that other cover. Wait. It's the second book in the series? Ohhhhhhhh.

I bought Nine Princes in Amber. Loved it. Read The Guns of Avalon again, in the old weird cover that used the words 'another swashbuckling fantasy voyage to the kingdom of Amber' instead of coming right out and saying it was a sequel. I felt dumb. But happy.

So my introduction to Zelazny was as a magical force that blew in from nowhere, didn't quite synch up to my very-sheltered youth, and gradually became a beloved companion.

May the lords of gossamer and shadow continue the work.
Posted by Rob Heinsoo at 6:25 PM