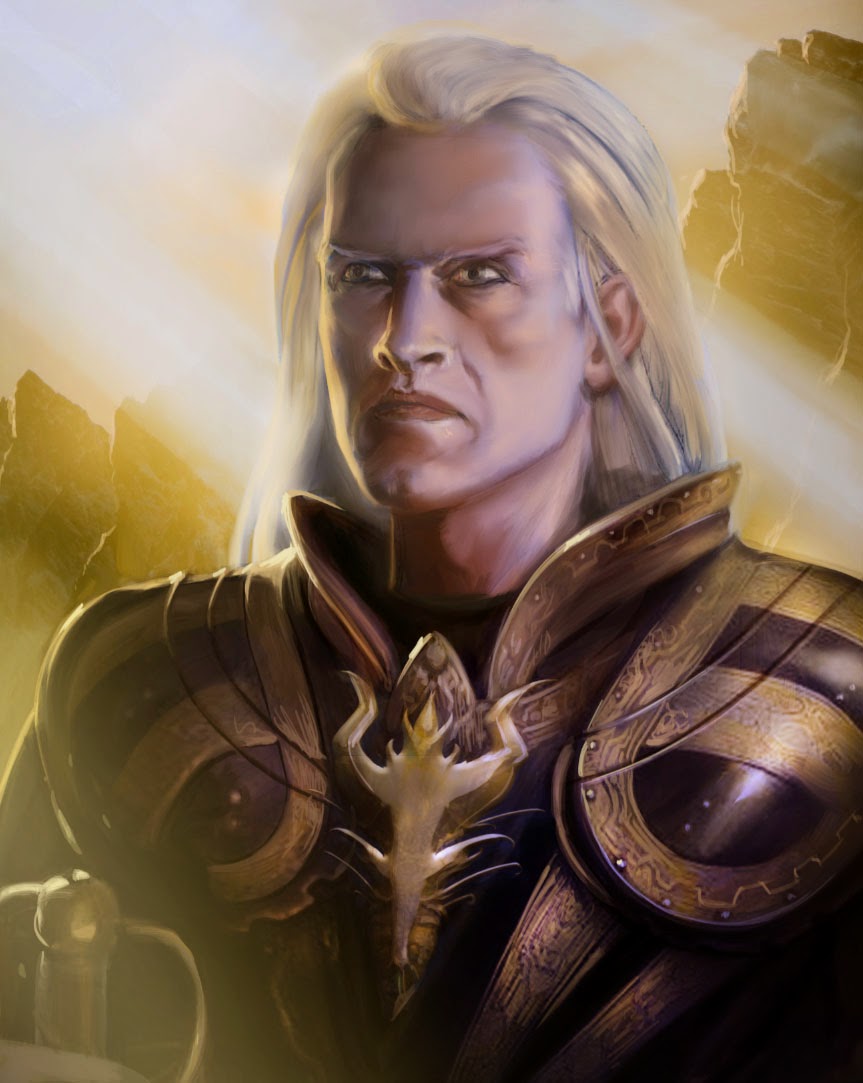 In other news, art for 13 True Ways is finished (unless I talk Lee into one more illustration that was his good idea but that falls outside the scope of his responsibilities). We haven't been sharing huge amounts of the art yet but it's in the wings. Just as Jonathan and I tried new things with game design in 13TW, Lee and Aaron pulled some stunts I did not expect and would never have demanded.
Posted by Rob Heinsoo at 1:40 PM 1 comment:

My 13th Age collaborator Jonathan Tweet does most of his social media through G+ these days. When he has a gaming blog he wants to run, I post it here. This time he's responding to requests for a discussion of RPGs and rituals.

Religion, rituals, and roleplaying games all work because people are suggestible. Maybe you’ve heard that being suggestible is a bad thing, as if it means you have weak character. But maybe instead you can think of being suggestible as being not stupid but sensitive. Your brain is whirring along unconsciously, picking up subtle cues from your physical and social environment, and adjusting your perceptions and behavior accordingly. Most of the time this all happens below conscious awareness, but sometimes we take fate into our own hands and manipulate ourselves, and that’s where you get things like religion, ritual, and roleplaying games. While early roleplaying games may have had a ritual quality to them, it’s the array of modern, funky RPGs that are really exploring this territory.

As children of the enlightenment, we atheists tend to downplay ritual or even deride it as a form of mind control or superstition. Humans, however, did not evolve to be rationalists. We evolved to use rituals, and the anthropologist and neuroscientist Terrence Deacon goes so far as to posit that our ability to think symbolically arose out of ritual practice before we had language. Whatever the origins of rituals, human cultures have innovated all sorts of them: dances, hymns, chants, prayers, auguries, sacrifices, salutes, christenings, weddings, funerals, processions, graduations, meditations, mantras, liturgies, prostrations, poses, consecrations, oaths, vows, and initiations. Rituals work on an unconscious level. As C. S. Lewis said, kneeling in prayer is qualitatively different from standing in prayer because humans are animals, and our bodies affect our souls. Lewis knew that our creator has given us instincts for humbling ourselves in front of a greater power; he just failed to identify evolution as our creator.

It’s easy to see the role and power of rituals in religions, but maybe it’s a stretch to see it in roleplaying games. I think I can see it.

Rituals have this funny way of working even if you know they’re fake, says world-renowned primatologist Franz de Waal. As he points out, a placebo works even if you know it’s a placebo. The conscious part of your brain knows it’s just a placebo, but the unconscious part of your brain gets tricked, and more often than not it’s the unconscious that’s running our lives. A college professor of mine used to attend Roman Catholic services because he was moved by the symbols and the drama. He didn’t believe a lick of the theology, but that didn’t matter to him. Roleplaying games can be like a ritual that we know we’ve made up.

Roleplaying games have built-in ritual elements. They take place among circles of initiates, who share a special reality and use insider terminology. Traditionally, one participant serves as the psychopomp or shaman, guiding the group through the game’s events. The Roman Catholic priest virtually becomes Christ during the Eucharist, and the Dungeon Master becomes “God” during a D&D session. Participants assume special roles, and they refer to each other by secret names. Players cast lots and consult the results to find out their respective fates. If you participate in enough gatherings, you progress along the game’s path, with more and more secrets revealed to you as you go. You level up. You discover the stairs to the 8th level of the dungeon. Outsiders routinely attribute further ritual elements to roleplaying, such as using candles and wearing funny hats. It’s as if the uninitiated can sense the ritual element of our games and expect to see ritual paraphernalia incorporated into them.

The player-character role resembles the role of a ritual participant in that the everyday self is left behind. In most rituals, such as taking bread and wine in Christian liturgy or the hajj pilgrimage to Mecca, the participants leave their public identities to become equals. In other rituals, such as the when the Huichol Indians undertake a spiritual quest to obtain peyote, the various participants assume archetypal or mythic roles. Maybe one of them always has to play the cleric.

A religious ritual often has an explicit, supernatural purpose in terms of the individual, but the natural effect of the ritual is often to improve group cohesion. The Roman Catholic Mass, for example, reportedly infuses the participant with the grace of God, but what it surely does is confirm the individual’s membership in the group. Roleplaying games likewise provide a shared experience that binds the group together, and the teamwork element of RPGs sets them apart from competitive games. When I was at GottaCon last weekend, I met a crew of D&D players who recounted how the game had brought them together as a friendship circle and had given them shared experiences that they treasure. If you’ve been part of a successful roleplaying group, you know what they meant.

Some roleplaying games have played up the ritual elements of gaming, especially the new crop of indie games. Perhaps as RPGs have moved past simulation, they have sometimes adopted more ritual elements. My game Everway (1995) features a Fortune Deck, like a tarot deck, which is used in place of dice as the random element. The card art features archetypes, symbols for astrologic signs and planets, and deities from across the globe. Polaris (2005) by Ben Lehman uses stock phrases to open and close each game session, as well as to regulate the progress of play. Instead of a GM running a group of players, the players cycle through game roles, sometimes playing their character sort of like normal, and otherwise portraying some aspect of the world while another player plays their PC. These roles have evocative names, such as “Mistaken” and “New Moon.” These esoteric references, like elements in a religious ritual, help player feel as though they are tapping into a cosmic order. More prosaically, games such as Vincent Baker’s Apocalypse World (2010) channel player choices and behavior, with formal limits providing a structure that encourages the sort of order and repetition that are also found in rituals.

So even though we know we’re not medieval heroes or post-apocalyptic bad-asses, something happens unconsciously when we put on those roles, especially as part of a group. These ritual elements originally bubbled up organically, but today indie game designers are incorporating ritual elements intentionally. It leaves me wondering whether we might see more elements of ritual incorporated into games, and that that might look like.
Posted by Rob Heinsoo at 11:42 AM 7 comments:

Last week, Jonathan wrote a neat essay on how 13th Age design relates to his work on 3e. It's a cogent account of how we wove threads from earlier editions of F20 into something new-ish in 13th Age. Jonathan has a gift for cutting to the core and the essay explains design decisions we haven't said that much about elsewhere.

Jonathan's essay appears on the Kobold Press website as a guide to 13th Age for interested 3.5 and Pathfinder fans, and to help our friend Wolfgang Baur promote the new 13th Age compatible Midgard Bestiary. This third-party 13th Age work is a collaboration by the adventuring team of LAW & Rockett.

That's designer/developer ASH LAW who runs 13th Age OP and designed many of the bug-whack monsters in the upcoming 13th Age Bestiary from Pelgrane; you will thank him later when your party's cleric insists on donning a chuul-antenna helmet, or when a hag's death curse twists your PC's social life around her dead bony finger. ASH is joined by the evil twin of Wade Rockett, who runs community relations for Fire Opal and who wrote the splendid Midgard icons that appear at the back of the Midgard Bestiary, just after the nine new 13th Age-compatible player character races, many of them monstrous.

That brings me to one of the wonderful things about the two upcoming Bestiaries. I ended up running the Pelgrane book, and there were a bunch of design approaches ASH suggested using throughout it that I only wanted to use just a little. So instead, ASH ran with them at full speed in the Midgard book. To name three examples:


The Kobold Press book does a lot with these concepts. Our Pelgrane book does just a little bit while spending most of its effort in other directions, particularly in story hooks and powers related to the icons. The result is a pair of monster books that will complement each other well.

The 100+ page Midgard Bestiary is out now. The 240-page 13th Age Bestiary from Pelgrane is due in May, but if you pre-order it now you can download the full text. As Jonathan's essay suggests, you may even be interested if you're not playing 13th Age yet.
Posted by Rob Heinsoo at 4:03 PM No comments: