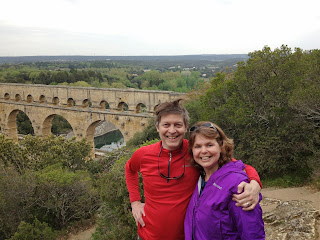 Last month Lisa and I and the rest of her family took an amazing vacation through Barcelona and southern France. It was the first non-working vacation I've taken in a dozen years and there were so many splendid moments that attending an actual Barcelona game (vs. Almeria, league minnows) fell out of the top seven joys of the trip. I'll write some of those moments up eventually.

For now, a moment that came a few days after the Pont du Gard photo above was taken.

We were staying at a hotel inside the old walled city of Carcassonne. For ironic effect, Lisa had brought our copy of Carcassonne along in the luggage, but there were better things to do than play boardgames in the hotel, so the box ended up serving as a postcard'n'art storage unit!

Past midnight, Lisa and I decided to go for a walk all around the old city's inner walls, sometimes climbing up on the outer parapets where the floodlights showed the route. The walk alternated between long periods of silence and isolation dotted with bizarre moments of frenetic activity. Once a celebrating rugby team roared past on their own top-speed circuit of the walls. Later a small forest of birds chirped at full volume, fooled as intense spotlights aimed at the inner wall simulated morning.

Before the rugby team and the birds, in the quiet section when it seemed we were alone, we rounded a corner tower and stepped onto the longest straightaway. There was no one else in sight, only bats flitting overhead, weaving out of the towers under the moon. And then power chords started up in the distance. Da Da Da da-da-da Duh Duh DUH. Repeat. I knew the tune. Couldn't place it for another few steps. We were still hundreds of yards from the source but omg it was Hell's Bells, AC-DC.

Another few dozen steps and it was clear it was a live band. Deep bass thumping down from up high on the walls. Two-thirds of the way down the long straightaway we passed beneath the band's hole in the fortifications. Thirty-five yards up the thick inner wall of Carcassonne, blue and green light swirled out of an arrow-slit, accompanied by the best attempts of a French rock'n'roll band to scream Aussie lyrics.

A couple hundred more steps and we'd rounded the final tower of the straightaway and were back in the muted world of midnight between the walls.
Posted by Rob Heinsoo at 1:23 PM 1 comment:

This isn't a blog with new news. It's an appreciation.

A few years ago Osprey Publishing started publishing miniatures wargames in book form. This probably shouldn't have been a huge surprise, since Osprey's military history line has long been a huge resource for miniatures painters and historical wargame designers. So far my two favorites in the Osprey wargame line are Lion Rampant--Medieval Wargame Rules, by Daniel Mersey, and Andrea Sfiligoi's A Fistful of Kung Fu--Hong Kong Movie Wargame Rules.

The wargame line has notably moved away from the straight historical treatments that Osprey made its name with. Andrea's book, for example, is a skirmish wargame treatment of the territory Feng Shui arranges for roleplaying games. And with the launch of the Osprey Adventures line in 2010, Osprey has a full-fledged documentary fantasy project going, with books on everything from Hercules to Zombies to Werewolves and Ken Hite's The Nazi Occult.

The catalog of about-to-be-published Osprey books is a bit like walking into the history section at the bookstore and finding yourself at a gaming convention. Chris Pramas is about to publish Orc Warfare! Phil Masters is coming out with The Wars of Atlantis. Ken is putting together The Cthulhu Wars.

In a week, two friends have Osprey books coming out that I've already pre-ordered. Ryan Miller has a naval wargame, Fighting Sail: Fleet Actions 1775-1815. And Steve Long is publishing Odin: The Viking Allfather. The artist for Odin, a Spanish woman named a-RuMor, does great stuff, and I'm keen to see Steve's treatment of Odin-through-history and Odin-in-myth.

Posted by Rob Heinsoo at 8:49 AM No comments: