Gaming this week: Book of the Underworld, Wingspan, Cypher System 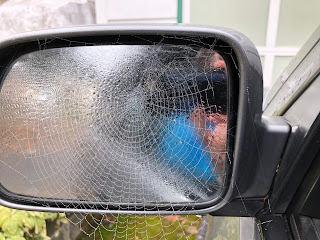 The wonderful car-web photo above was taken by Lisa Eschenbach, and I'm using it to acknowledge that I finished the development phase on Gareth Ryder-Hanrahan's Book of the Underworld earlier this week. Yeah, it took a few weeks longer than I expected. The book is now with the editor. All the art is coming in on schedule so it won't be too long before it's in layout.

Also this week, I made huge progress on two new designs. The secret card/boardgame I've been designing for my own personal satisfaction has achieved harmony. Players have been enjoying it for awhile, and now I'm also simply having fun rather than seeing things that need fixing. Notably, I'm no longer winning every game. There's a specific type of imbalance when the designer's advantage in knowing what might be unbalanced pays off too often. Happily, I'm losing now, so that development phase is over.  I'll be looking for a publisher soon.

Meanwhile on a different unannounced boardgame project that has a publisher already, I solved the last of the design problems that was bugging me and am making a pass through the cardset and other components to live up to the new solutions. I'm looking forward to playtesting next week.

I also enjoyed a couple first-plays this week. I've only been able to find the European supplement for Wingspan, but friends Brittany and Miguel brought over the core game. We all loved it. Lisa used the Audubon app on her phone to accompany turns with the calls of the newly played birds. Brittany arranged a ridiculous combo and stuffed what she called a 'Christmas goose' with 20 VP, so curses accompanied the bird calls. 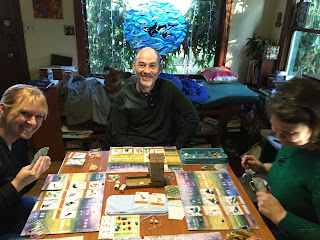 I also got to play my first game of the Cypher system, in a highly diverting fantasy genre session run by Bruce Cordell. I had fun as a Resilient Speaker Who Keeps a Magic Ally. Specifically, I'm playing a priest of a war god that died in apocalyptic fashion (the god I mean), and now I get my spells from random deities, changing every day, who are using me as an experiment, or a bet, or something. More or less a One Unique Thing that will definitely make for fun prayers. Also: I'm a kite-fighting and bocce ball aficionado. My comrades are considerably doughtier (more on them next time), so all shall be well.

And though we didn't play The Gods War this week, it launched a Kickstarter with Gloranthan gods of War, Secrets, and Magic, and I'm pretty sure I never shared this method-acting photo from our Gods War game. From right to left, Sean pulled faces as Chaos, Jonathan was a stickler-for-rules Solar, and I was a Storm player who never rolled a 6 after mistakenly using a wargaming plan in an area control universe. The sword was an attempt to compensate for 6-less-ness. Paul, the Darkness troll photographer, ate us all. 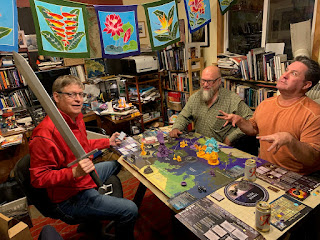