Speeding Up, Letting Go, What the Hell 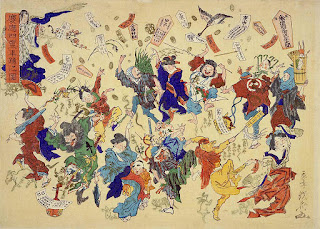 For a person who always loved games, it took me too long to learn that I'd be able to play more often if everyone enjoyed playing with me. I wasn't a bad loser, or an intolerably bad winner. I was just soooooo slow. I played "well" because I analyzed all options and wasn't quick about it. When my wife Lisa started talking about using a timer, or just not playing some games with me, I got the message.

These days I work at playing quickly, carving off a couple slices of analysis and putting the rest in the "yeah, things might get messy there" bucket. It's not always easy just-letting-go, and sometimes I have to roleplay reasons that I'm not going to work hard at being clever.

For example, playing Lanterns, I limit myself to a one-minute turn, and the last game I played when it felt like I might be making a mistake, I said something like "Well, we dropped the oars and were scrabbling around in the bottom of the boat when we should have been lighting lanterns. So we've gotta dump the lanterns overboard before the boat catches on fire, now!"

Playing Commands & Colors: Samurai Battles for the first time a couple months ago, I played from the beginning saying that my commander was nursing a bad hangover. Did a good job of roleplaying that too, since I ended the game by charging disastrously with the wrong unit, snatching defeat from victory. Ee ja nai ka!

Playtesting new games with skilled designers and tournament players, I sometimes run into a variant of the same problem. Even in their first game, players who don't really understand the rules yet tend to want to analyze everything instead of just-playing-through.

So I've recently been starting introductory boardgame and testing sessions with roleplaying advice: "Pretend we're drunk! We're not going to get everything right. You don't know the system and I'm not gonna do a perfect job explaining things all the way through, so you won't make the right decisions, let's just plow through and if something goes wrong, well, it's my fault, what the hell!"

It's done, and formatted.

I'm showing it to Pelgrane and peeps to catch any glaring errors as I figure out Mail Chimp's current configuration and add newcomers to the playtest list.

I think giant problems are unlikely at this point. I should be able to get the playtest's Alpha draft sent out on Wednesday, November 9th.

Posted by Rob Heinsoo at 7:13 PM No comments:

We've got the chapters together except for some adjustments in Monsters.

I should finish that creative and editorial work tomorrow, and that should mean that the Mailchimp packet can go out to people in the playtest on Monday the 7th or Tuesday the 8th.

If there's a problem with this timing I'll speak up again on this blog.

I'm very excited, what we've got in the packet has turned out to be quite fun.