There are three Alchemist-tier 13 True Ways Kickstarter backers who gave us magic items to illustrate.

The first item is the Feathered Crown from Jered Heeschen. Look at the art from Aaron McConnell (with a touch of radiant feathering from Lee Moyer)! 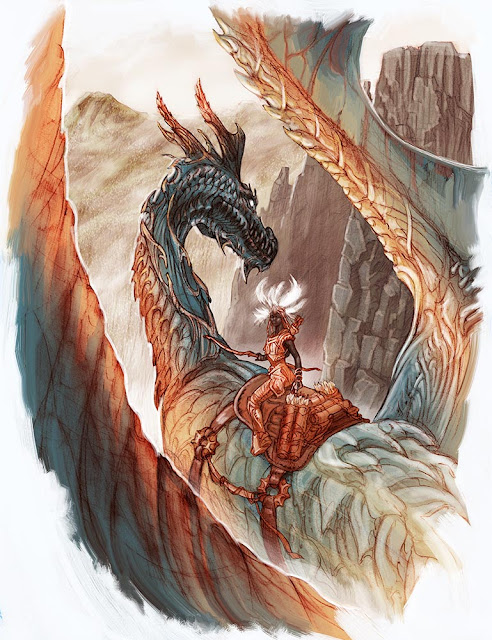 Jered very much wanted the item's quirk to play as follows: Quirk: Not only do you compulsively eavesdrop, you also tend to misinterpret insults as compliments and bad news as good news.

I decided that it sounded like just the thing for a dragon-rider to wear. "Ah, they're saying wonderful things about me. They do know what's good for them."

I like the item and the art so much that it has changed our plan about how we are going to stat up these specially illustrated treasures: we're going to provide several different versions of the mechanics to fit into the panoply of different characters and campaigns!

And speaking of changing plans about treasure, we've changed one small fact about magic shields during layout. Neither Jonathan nor I were happy with the fact that we had given shields no default magical bonus. That seemed bogus. So I rummaged through our options and changed things around. Magical shields in 13th Age now provide the default hit point boost that magical belts used to. Belts ended up with a default bonus to a character's number of recoveries, which also doesn't suck. A happy last minute correction for a muffed punt.

Our thanks to Jered,
Rob Heinsoo