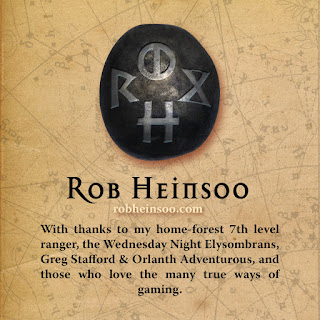 *So, about the music that accompanies my interview's opening and ending titles... Jeff Richard started the filming afternoon by giving me stick about the Christmas sweater I was wearing. Then I gave him crap about the Wagner music he'd used to frame Greg's video. I managed to get the Christmas wreath that half-haloed me on the wall behind my head taken down before we filmed, but singing may have been involved. The moral: don't screw with people who are about to add musical accompaniment to your video.
Posted by Rob Heinsoo at 2:09 PM 1 comment: