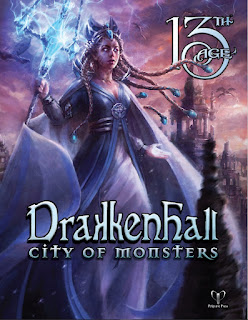 cover by Roena I. Rosenberger You wouldn't know it from the seriously beautiful cover, but Drakkenhall: City of Monsters is a seriously funny book!

You *might* know it from the back-cover text, because having multiple chapters that made me laugh out loud translated into the easiest copy-writing job I've ever had. It goes like this:

Monsters are people too!

The Emperor expected a city of monsters to destroy itself, but instead the Blue and her people have created a city that’s wickedly unique: Drakkenhall!

Make a splash in the social season alongside a fashionista ooze!

Spend the night at a dybbuk inn at the docks, where possession is a perk!

Dodge the amputation golems until you can get your healing spells back!

Explore the Rubblehoods, the neighborhoods that have been left as monstrously energetic ruins!

Prove yourself as the most dangerous monster of all–an Adventurer worthy of joining the S.M.A.S.H. Society!

Drakkenhall: City of Monsters is a 124-page 13th Age sourcebook for GMs running adventurer and champion-tier campaigns. Contents include Ailor the Draco-Druid, kaiju shark mooks, 60 other monsters, the secret history of the Dragon’s Orc statue, a couple gnarly ideas for replacing missing limbs, urban planning notes (city of monsters-style), and light rules and guidelines for sea travel in the Dragon Empire that Gareth managed to slip into the chapter on the Docks!

Giving each of the book's authors a full chapter of their own worked better than I could have hoped. Drakkenhall is already on pre-order in the Pelgrane store and we're in the last few days of the layout process, so the final PDF will be part of that pre-order soon. Pick it up and attune your dance card for the Houses of Decadence! 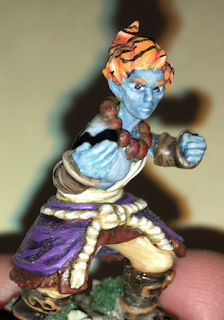 What does rebellion look like when dad is an ogre mage and mom is a rakshasa?

In Kor’s case, rebellion looks like obtaining magic that makes you look mostly human and studying to be a monk in a monastery run by the Dragon Emperor. Of course, many of Kor’s forms don’t look a lot like styles practiced by Imperial monks. There are limits to how straight you can be when the Black Dragon is an old family friend.

Yeah, Jonathan says this is the most-me character ever.

I used the beastblooded modifiers and the bestial fury ability from Book of Ages (page 77). When Kor (it’s kinda Rak backwards, natch) goes beasty-fury, the spell making him look human drops temporarily and you get a glimpse of the tigrish-ogre beneath. I didn’t realize I could have sung “ograkshasa ograkshasa ogra ogra ograksasa” until now.

I’m using the past tense because we were right there, deep in the Stone Thief (thanks in large part to the activities of Kor’s older sister Kyla), when Paul Hughes gifted me with the certificate that crafted Kor at HeroForge. I decided to keep Kor’s hands facing human-style, instead of trying to show him full-beast. And then my wonderful talented friend Brittany Broyles (@blondeofmystery) painted Kor. Now we know how to make sure campaigns don’t get played again: make a HeroForge mini of your character.

Still, hope remains. If not back inside the Stone Thief, some other game. Maybe I’ll get really old school and blow a character created for one campaign into another version of the Dragon Empire, like a leaf in the wind. A leaf with fangs! 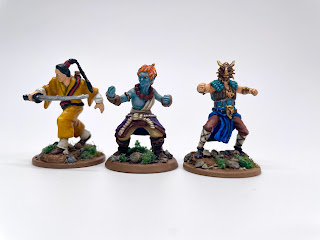 (a much better photo from Brittany, with the other two minis she painted for me accompanying Kor)
Posted by Rob Heinsoo at 11:01 AM No comments: 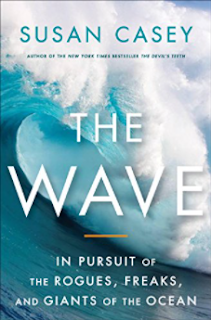 The Wave: In Pursuit of the Rogues, Freaks, and Giants of the Ocean, by Susan Casey, is from the genre that mixes compelling science with the author’s personal experiences. The science concerns the physics of giant waves and interviews with the people who study them, along with an investigation of previous understandings of giant waves, and how we are still underestimating the frequency and effect of rogue waves of 80’ or more. The science chapters are fascinating.

The personal-experience chapters eventually focus on time spent with champion surfer, inventor, and adventurer Laird Hamilton. The adventures on the waves are the closest I’ve come to reading a true-life Doc Savage story. If Hamilton isn’t bigger than life, we’re given an excellent picture of just how big life can be. For a more detailed review, this one is good. 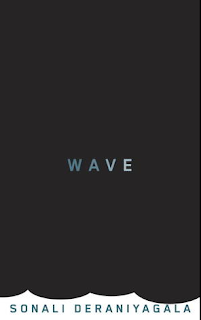 Wave, by Sonali Deraniyagala, has an entirely different purpose and emotional register. It's not how big life can be, it's how big a disaster can be and how that hits one person. The cover design matches the book’s impact.

The first chapters are a mind-wrenching account of being caught in the 2004 tsunami in Indonesia. It’s unlike anything else I’ve read. The rest of the book follows a tortured path through survivor’s guilt and the mechanisms of a return to life. The copy I read didn't have a subtitle, but now it's subtitled "A Memoir of Life after the Tsunami."

I found myself reading a number of disaster stories during the pandemic. A disaster this huge, that hit a world away from almost everyone I know, is one of those things I try to remember as part of maintaining perspective. I associated Wave with another book I loved, Annie Dillard's For the Time Being. Dillard's book I can reread, Deraniyagala's, probably not.