Last week, Simon Rogers and Pelgrane Press started selling pre-orders for 13th Age through the Pelgrane store. It’s time I wrote a note about the business side of the creation of 13th Age.

If you are only concerned with game design and gameplay issues, you'll want to skip this note. Its final point will be to explain what I know about the possible trajectories of 13th Age, including, of all things, a Facebook game. But first I'm going to explain those possibilities by introducing the company that has created the project, Fire Opal Media.

How We Started Fire Opal Media
Jay Schneider and I didn’t work together at Wizards of the Coast but we knew each other’s work. I’d designed roleplaying games, card games, and miniatures games while at WotC. Jay had worked as a designer leading the team that put Duels of the Planeswalkers on Xbox. When we found ourselves as free agents in the middle of 2010, Jay and I decided to collaborate on a new electronic game design.

My first concept for a game convinced Jay he wanted to work with me. Then Jay came up with a much better idea. We recruited two other friends as founders: a business guy, Gerald Linn, and our technical director, Louis Towles.

Our next decision set us on an unusual path. We didn't have the money to fund an electronic game. We didn't like the way game companies were usually set up, with rewards flowing mainly to investors and people who handled money rather than the people who did the work. Instead of looking for investment money, we decided to set ourselves up as a game design co-operative.

We also took the ambitious position that we could finish our first electronic game in 14 weeks. We called ourselves 14WeekHobby. Oh utopian dreams.

So we ended up with around 30 freelancers in various parts of the country working for sweat equity on an electronic game that struck each of those people as a worthwhile risk.

The good news is that this 14Week game is still ticking slowly along, closer to reality every month, still being labored on via a bizarre sweat equity coding team that is making it work. The bad news, if you do the math, is that 14 weeks was a nutso deadline and 14 months didn't work either, and so on. Our 14Week game should come to fruition some day but I don't know when. Normally you have to be a somewhat big/or-at-least-funded company to successfully publish an electronic game of any ambition, but the excitement of working together on something that could be big has carried us this far. We say that those of us still working on these projects for Fire Opal in their off-hours and in late-night team sessions have 'the pajama gene.'

Of course 14WeekHobby was never our real name. Especially not 28 weeks later. So we teamed up with my friend Lee Moyer and put together a name and logo and identity as Fire Opal Media.

Then we determined that it was nigh impossible to set ourselves up as a true cooperative because the laws for co-ops are mainly set up for agricultural products, not game design. So instead of taking a turn into dairy-farming, we've restructured ourselves as a game design corporation where nearly everyone is working for sweat equity. All of us working on Fire Opal projects end up as part-owners of what we create.

13th Age
While our developers and computer programmers were working on the 14Week game, there wasn’t much point in doing more ambitious electronic game design. I turned to non-electronic designs. One of those projects turned into Epic Spell Wars, a freelance gig for Cryptozoic. But what I most wanted was to take advantage of the fact that Jonathan Tweet and I played D&D together every Wednesday night. Jonathan and I could work together to design the game we would most want to play together.

Jonathan and I have been friends for years. Working together again was natural. Since Fire Opal Media isn't interested in being a tabletop rpg publisher, we were looking at teaming up with Pelgrane as the publisher from the start.

What Fire Opal was interested in was an IP that it could use for games on other platforms. Most of the Fire Opal coders were busy working on 14Weeks, but we had a great new programmer named John Hodgson who needed something to work on. We all had enjoyed the Tiny Adventures game that WotC made for Facebook and then shut down. We decided to try making our own simple Facebook game for 13th Age. It doesn’t have its official name yet, so for now let’s call it 13FBG.

13FBG is a low-impact text-based adventure game for Facebook using a version of the 13th Age IP. Jonathan originally ran the project, then he got hired by Amazon and had to stop working on 13FBG, so I took over while working on 13th Age. I believe in making individual games fit their medium instead of trying to represent precisely the same reality, so this Facebook game uses 13th Age icons and classes as a framework, but really, the background story and world are most of what the games have in common. The game has some cool new ideas. But the reasons Jonathan and I are passionate about making 13th Age as a tabletop game that inspires every player and GM to go wild with their campaign? None of that translates over to this electronic Facebook game.

I originally viewed the 13th Age rpg as art I wanted to accomplish, a labor of love. I thought it might be good business, but I wasn't sure. I thought that the 14Weeks game or maybe 13FBG would surface as the stronger business push of the company.

Fast-forward to now, where I find that 13th Age, the labor of love project that we *attempted* to create as self-encapsulated seems likely to spawn at least a bit of a game line. And 13th Age is being published soon while the electronic games that Fire Opal started long ago are still coding their way toward reality.

Plans & Possibilities
So here's the probable future as I know it.

First, we are going to publish 13th Age through Pelgrane as soon as it's well-finished. I have 690+ pages of playtest feedback I'm digging through and accounting for. Y’all took the time to point out the problems. We owe it to you to think about them and improve what needs improving before we publish. We're working on it. We wanted to publish the game by GenCon but no, that’s not going to happen. The first priority has to be making the book great. Schedule will slip instead of quality.

Second, at some point we are going to figure out how to make an expansion book for 13th Age using the same team, me and Jonathan (design) and Lee Moyer and Aaron McConnell (art). The finances of our present sweat-equity reality may well push us toward Kickstarter for that, especially since we have an idea or two for how Kickstarter could interact with the book marvelously.

Third, I know that Pelgrane wants to publish other books for the line including adventures and.... well I shouldn't speak Simon's mind. I am going to be as involved with these books as I can be, in one case I believe I'll be the main designer. The Pelgrane-initiated books aren't likely to have art from Lee and Aaron; other artists will be getting in on the act.

Fourth, we are figuring out how to participate in the OGL while holding on to the story elements of the game as our intellectual property.

Fifth, our sweat equity model *seems* capable of pushing the Facebook game 13FBG out into the world sometime later this year; partially because our programmers rock. Partially because Gregory Marques who handled Tiny Adventures once upon a time is now running it. Partially because great writers like Logan Bonner, Greg Stolze, and Tracy Hurley have signed on to help write the adventures. And partially because we will cunningly re-use as much of the art from 13th Age as possible to illustrate the online game.

So there is a lot going on.

My first priority is finishing the 13th Age rpg. I love the process of getting this done right.

For now, other Fire Opal people like Wade Rockett and Jonathan Tweet will probably be speaking more about 13th Age than me. When 13th Age is done I hope to be more in touch with social media and with the playtesters who have sent wonderful adventures, great graphic treatments, fun write-ups, and pictures of toenail painting sessions occurring mid-combat.

Yours in the whirl,

While revising the cleric for 13th Age on Friday night I got a mightily surprising text message. Richard Garfield texted to say that he had put up a podcast on Epic Spell Wars and that he hoped I liked it. Umm, yes, I do! The link is here.

The podcast is funny and thoughtful. Richard observes that ESWOTBWDAMS is a game where what you see on the cover is exactly what you get from the art, components and gameplay. From a general game design perspective, Richard talks most about the tension between player interaction and intrusive player politicking. I was happy that Richard zeroed in on the way Epic Spell Wars handles politics, a subtle element of the design that doesn't always get noticed.

Richard describes ESW as a party game, which I think is right. I recently asked people preparing press releases for 13th Age to stop referring to the design of Epic Spell Wars as "critically acclaimed." Critically acclaimed felt wrong to me. Acclaimed by people who like to laugh and have fun, that seems accurate. I'm extremely happy that Richard is one of the people in that camp!

Richard's podcast ends with a children's section where he quizzes his son and another kid on their favorite characters and moments in the game. Very sweet. So I thought I'd sign off by sharing this thank you note I got from two kids, Wayan & Nils, who we gifted with a copy of the game early on. 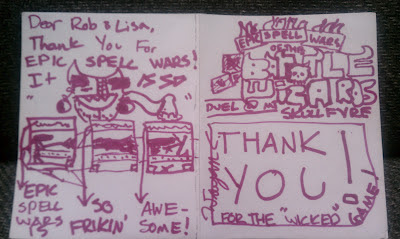 I have a new piece of art by Lee Moyer hanging on the wall above my computer monitor to inspire work on 13th Age. It came in especially handy while working through Chapter 8: THE DRAGON EMPIRE with the editor. 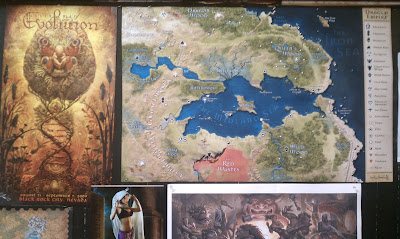 The top-right piece in the photo above is the map for 13th Age, captured during a rare moment of sun in Seattle. I'm  overjoyed to have the map above me. Printing the big version was worth it. It won't be in the book at this size but who can say what the future holds?

As to the rest of the art currently on my work-wall, I suspect many of you will recognize one or two of the other pieces but I'm not sure how many people will recognize all four from what's visible.
Posted by Rob Heinsoo at 4:55 PM No comments: