For a change, this was a week without serious playtesting on unannounced projects. Instead I ended up playing one session of 13th Age and a couple sessions of boardgames.

In our Wednesday night 13th Age campaign that will at-some-point-in-the-future drop us into the Stone Thief, we were in Horizon tracking down an expert on living dungeons. He had managed to overdose himself on his own magic cloak and become a monster known as a bonded, so paying him a visit led let to a fight where I had the sense that this monster we were fighting should really be tearing us up a lot more, remembering something of the Bestiary 2 writeup. (Page 15, a monster by ASH LAW.) Afterwards the GM indicated that he’d never rolled the magic even-numbers, and I’m glad I hadn’t seen the stats during the game because I’m pretty sure I would have realized they were even worse than we experienced, and would I have been able to keep my mouth shut? No. We got off lucky. 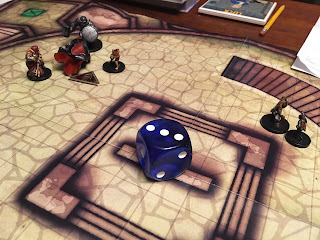 I’m having a great time roleplaying and freewheeling with icon relationship narrations in this campaign, but so far in combat my monk’s slogan, borrowed from Mark Jessup in our old 3.5 campaign, is: “I’m 39 hit points you don’t have to lose.” (It would be 40 points but I'm spending one point to maintain the illusion that I'm human. When mom is a rakshasa and dad is an ogre mage, sacrifices must be made.)

The next night we tried a four-player game of Eric Lang’s Rising Sun. It was fun, despite the fact that I screwed up the game’s logic by introducing the autumn cards ahead of the summer cards. Yes, we played in a twisted fantasy world where spring-autumn-summer-winter led to my Bonsai Clan’s natural rhythms being horribly disrupted. Stunted trees were chopped up and fed to the Koi Clan without gaining the attention of the Imperial poets. The Turtle Clan conquered all. 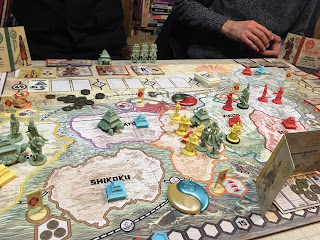 The Dragonfly Clan also acquitted itself well but had one of its bushi eaten under the table by the newish monster in our home, our eleven-month old puppy, Sammi. Sammi managed to ninja miniatures off the table with no one noticing until she was done chewing. No more under-table game nights for Sammi. 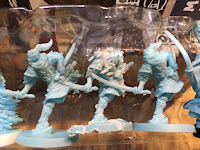 (To give Sammi her due, here's a much more typical photo. This was the evening that Lee Moyer introduced Sammi to her first picture book.) 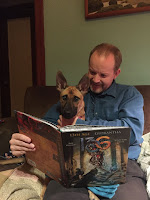 Over the weekend our 12-year old godson Lucas and I played a couple sorta-wargames that are also cardgames. First I taught him how to play Up Front, the amazing old Avalon Hill WW2 game that bills itself as the Advanced Squad Leader card game. It’s a fantastic system that handles actions, terrain, and combat resolution with a single deck of cards. I’ve played so many games of Up Front that even though it had been Many Years since I’d last played—so many years that the rubber bands holding the decks together all snapped immediately—I remembered the game well enough to teach it with fewer missteps than I’d added to Rising Sun. I made sure to play the Italians against Lucas’ British, but the Brits suffered mishap after mishap (a malfunctioning STEN gun!) and it was a proud day for Italy.

Then we played a couple games of Jeff Horger’s Manoeuvre from GMT. We both liked it a lot, the game hits a sweet spot for evoking Napoleonic battle without a complex rules set. I played with the Ottoman Turks and the Chinese 8-Banner Army against Lucas’ Brits. The photo shows Lucas’ finger pointing to where he intended the battle to be fought, instead of over to the right where a couple doughty British regiments had fallen to my Bannermen. 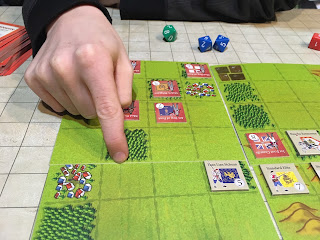 The Chinese are from the expansion, Distant Lands. It’s on sale for $25.00 on the GMT website. If you’re looking for a fast-playing light game that blends Napoleonic maneuvers with a touch of fantasy, this is a steal. It’s worth mentioning that Distant Lands has everything you need to play except the polyhedral dice, terrain that's more vanilla, and a box. The game is better with the core box added, which I'm sure you can still find in game stores, but the expansion alone creates fun battles.
Posted by Rob Heinsoo at 11:18 AM No comments: