Once upon a time in Elysombra, toward the 2/3rds mark of Jonathan Tweet’s epic 3e campaign, I switched from playing Sigurd, the dwarf fighter who’d taken a level of cleric to better understand Primus’ will, to playing a half-dragon gnome psychic warrior named Dzhay who maintained an illusion of looking like a jailbait Pippi Longstockings until she tore someone’s throat out with her camouflaged silver-dragon teeth.

Dzhay plundered the Psionic Handbook and came out loaded for war. For this, and for abandoning Sigurd, and for somehow talking the notoriously stingy DM into gifting me with a full load of good magic items, I achieved campaign infamy.

Which did not lessen the second time our party got gacked trying to destroy a particular naga-infested Temple of Evil.  We’d been hit by overwhelming barrages of empowered fireballs and lightning bolts, some cast by nagas and some cast by our own frickin’wizard, who’d had  the courtesy to ask whether Dzhay could take a hit from a fireball but did not entirely listen to the answer. The answer had been no, not so much, and especially not with a disintegrate spell on the way from the nagas.

So Dzhay was toasted and Jonathan gleefully turned to determining the fate of the magic items she had been carrying. Old school baby! First I rolled saves for the stuff she used, then I turned to rolling for the items that she kept in her backpack. When I mentioned that it looked my +4 amulet of mighty fists had been destroyed, Mark Jessup, playing the party’s abused but beloved monk, Ta-Wei Shek, nearly spit out his teeth. “You have a +4 amulet of mighty fists? And you keep it in your backpack?”

Guilty. Guilty and oblivious. And in no position to correct the error.

This, and other slights and fiascoes, eventually led Mark to utter the despondent war cry we forever associate with his flamboyant yet strangely ineffective characters: “I’m 76 hit points you don’t have to lose.”

Although to be fair, in the final act of our heroes’ mortal existence, Ta Wei-Shek climbed the head of the world’s greatest red dragon, Vaerm, and punched her in the brain, no +4 amulet required.
Posted by Rob Heinsoo at 8:37 AM No comments:

When Lee Moyer and Keith Baker started their Kickstarter for the excellent Doom that Came to Atlantic City boardgame, I felt there was something missing. A few things, actually. Despair. Desperation. The mounting pressure of inevitable torment.

But now that the game is meeting and exceeding its stretch goals one-after-another, now the torment arrives. As I seek to work with Lee on the art for 13th Age, he is called upon again and again to reach deep within his withered septum to scrape another pewter benefit out onto the Kickstarter ladle. Let it be so.

I love this game. In a previous incarnation I no longer clearly recall, I contributed ideas to the game that its creators deemed worthwhile. Don’t let that put you off. It is more fun than capitalism and less destructive to your friendship circles than the OC (Original Cults). Although it appears to be a luck-based move-around-the-board adventure, there’s quite a bit of skill involved in actually winning, as the wins-to-losses ratio of the verdammt Keith Baker has proven in games I have been privileged to lose.
Posted by Rob Heinsoo at 5:47 PM No comments:

We had an amazing family vacation for two weeks just as I was turning over the 2nd playtest draft of 13th Age. We spent two weeks in Turkey, starting with four days in the carved rock of Cappadocia, where I typed the new echo spell notes for the wizard listening to the night call of the muezzin bouncing off a fortress rock named the Castle of Uchisar. Then we drove south and west along the coast, hiking in ruins and swimming in the Mediterranean before catching aflight to Istanbul for a final four days of museums and bazaars.
In Kalkan, we stayed in a sweet hotel that we thought was named the Harpy Hotel. But half its logos and signs said the Happy Hotel. Which was it? Well it started as the Harpy Hotel. As witnessed by the Harpy Stele at the nearby ruins of Xanthos, the local harpies were conceived as benevolent spirits, winged women who took the souls of dead children to heaven. Huh. Dead children, well, I guess that’s the human condition. Heaven is good, at least.
But every week a hotel guest mentioned that as far as they knew, harpies were monsters. Eventually the hotel acknowledged its PR error. The owner’s name includes a Turkish word for happy, so the new name is a double-entendre that most guests won’t realize.
As we were checking out I decided to take one last look at email since it seemed likely we wouldn’t have access that night. I had a surprise present, the first 13th Age monster tile I’d seen from the Diabolist, sent over by Lee Moyer who’d finished the tile from Aaron McConnell’s rough pencils. And yeah, the moment we were checking out from the Happy/Harpy Hotel, Lee sent over the harpy. 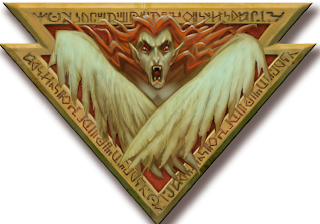 I had my laptop in hand as we checked out and showed the art to the concierge, saying “You know all those people who turned the harpy into a monster and made you change the name of your hotel? I make games. I’m part of your problem.”
For those of you reading this entry for information on 13th Age instead of keeping up with my synchronicity highway vacations, here’s the scoop on our monster tiles. Preparing the art order, I mulled over the fact that our monster selection for the 13th Age book deliberately sticks close to d20 norms. Therefore most of our monsters have been extremely well-illustrated multiple times. And recently. What were we going to add? Did our audience really need another monster-format illustration of a gnoll? An otyugh, even? There had to be a more interesting approach. So I turned to the strengths of our setting: what if the monsters could be represented by control glyphs created by the Archmage? That way the monster illustrations would be different and say something useful about the world. Maybe I’d put together a card game using the glyphs. Maybe the game would correspond to a game played by wizards.
I talked the idea over with Lee Moyer. Mr. Value-Added, I call him. Once Lee began experimenting with the glyphs, he suggested that we rank the monsters with icons they might be associated with instead of giving the Archmage all the credit. Of course! Each monster or monster type appears on a form of tile, stone, gem or plaque associated with one of the icons. The Diabolist’s tiles are all shaped like the harpy tile, a shape you'll recognize from the icon's illustration. On the Diabolist’s other tiles, instead of a harpy you’ll get a hezrou or dretch or balor. But the Elf Queen’s tiles look nothing like the Diabolist’s tiles, ditto for the High Druid and each of the other icons associated with a few of the monsters.
Lee nailed this project. We’ll share more monster tiles soon!
Posted by Rob Heinsoo at 12:59 PM No comments: