Here's the early 2016 update about a few of the upcoming 13th Age books and projects. Unlike updates that are all about the publication day, I'm writing from my creator-perspective; there are creative fountains I have to maintain, but the pipelines beyond the design/development/art phase are Pelgrane's (and Chaosium's), not mine to service. So I'll post later updates when I'm sure of street dates.

Except for Chaosium's 13th Age in Glorantha, these are all Pelgrane publications.

printing now
The 13th Age GM Screen and Resource Book has been in the printing process awhile already and will therefore be in stores super soon! Cal Moore and Wade Rockett did a great job with the screen info and book and as developer I chummed the waters. Pre-order people can already get the PDF from the Pelgrane store. It's an excellent resource for anyone running 13th Age and would be the new product to pick up for people who just bought into the 13th Age Bundle of Holding because of the help the 64-page resource book gives phrasing campaigns, running memorable sessions, and providing a big fold-out map of the Dragon Empire to lay in front of the wonderful screen art from Lee Moyer and Aaron McConnell. 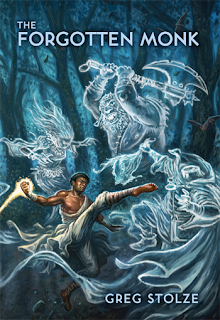 released and headed towards wider distribution
Greg Stolze's The Forgotten Monk novel is available in print and PDF from the Pelgrane store. It's going to have wider distribution through Stone Skin Press later this year. It's a charming book, by turns deadly serious and idiosyncratically funny. This would be the new product for people who just bought into the 13th Age Bundle of Holding because it's something completely different, a narrative entry point into 13th Age that shows how every GM/creator can make their campaign/world their own. 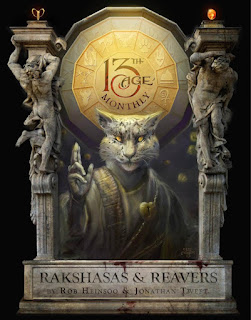 about to start again
13th Age Monthly is back for its second year. The cover of the first installment of 2016 is pictured above and will be released toward the end of the month. Rakshasas & Reavers is a monster supplement, with a bunch of creatures Jonathan and I have been using in our games. As last year, each 13AM issue is slated for a minimum of 4000 words, but looking back at 2015 we were almost always over that. 2016's mix of GM stuff, player content, and stuff for everyone will include articles on summoning spells, phoenixes, rules for adventuring in the middle of mass battles, an adventure tie-in to 13 True Ways, and a piece on the forests I've been noodling with for awhile now and am finally happy with. People who like to cherry pick can eventually find individual issues on the Pelgrane Press store and on Drive-Thru RPG, but subscribers also get the new 13th Age OP adventures. That's a good deal. 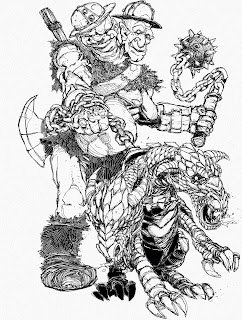 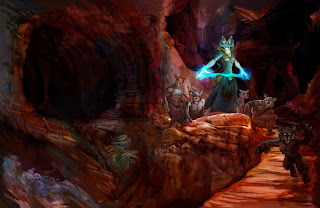 in layout
Cal Moore's High Magic & Low Cunning: Battle Scenes for Five Icons is now in layout. With 44+ battles and battlemaps, I believe the book is going to clock in at something like 190 b&w pages. The book was great fun to develop and art direct. Patricia Smith handled the cover and she and Rich Longmore shared the interior work. Above Patricia's wrap-around cover and below this text, I've inserted a couple of Rich's interior pieces I enjoy, lifted from battle scenes/mini-adventures involving the Archmage, High Druid, Orc Lord, Prince of Shadows, and the Three. I'm not going to say *which* icon these are from, don't wanna play the spoiler, we'll let players find out! 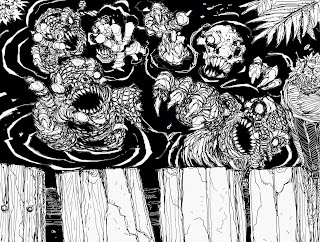 art in progress
Cal Moore's next book of mini-adventures and fight scenes to drop into campaigns is called The Crown Commands: Battle Scenes for Four Icons. Art is underway and I expect to finish development by the end of March. If the icon wears a crown more often than not, and is pretty sure they could rule the entire Empire, given the chance, their battle scenes are in this book. Dwarf King, Elf Queen, Emperor, Lich King. 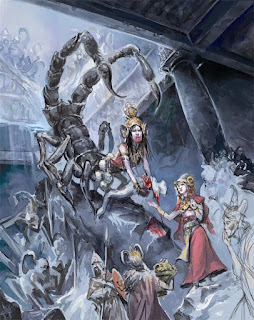 design moving close to completion, art in progress
13th Age in Glorantha is the giant project Jonathan Tweet and I have been working on for Chaosium. It's late, but it's getting close to done. It's a Kickstarted labor of love like 13 True Ways and has a similar number of improvements that push the system into places it hadn't gone before. Moving 13th Age to Glorantha overhauled the storytelling mechanics, but all the new classes and transformation classes and monsters and rune gifts and subsystems will be entirely useful in core Dragon Empire games for people running campaigns not set in Glorantha. (Illustration above by Jan Pospisi is an early work-in-progress of Gagix Two-Barb, an  NPC/monster who Jonathan is busy turning into a long-running campaign nemesis; I love the energy of this early draft.) 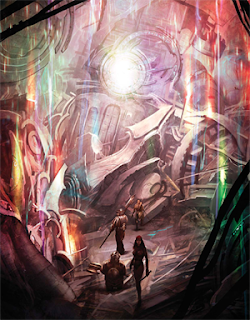 second draft complete, awaiting a bit of dev work and art
Shards in the Broken Sky by ASH LAW will be the next adventure book on my dev-docket when The Crown Commands is finished. It's going to be quick and we've got an artist excited about tackling ASH's amazingly detailed art order, so the first adventure we announced will finally be out this year.

first draft complete, devwork pending
Gareth Ryder-Hanrahan has outpaced my dev-calendar by finishing Book of Demons! It includes a pact-making demon summoner class we haven't decided the name of yet. Exciting work, and the same size as Book of Loot.

three other things
There are three other books/projects underway under Pelgrane's wings and two of them are new styles of product for us. But I don't expect any of them to be published ahead of the books mentioned above, so let's save them for later.

yours in the whirl,
Rob Heinsoo