Wearing the Cape: the book & the Kickstarter 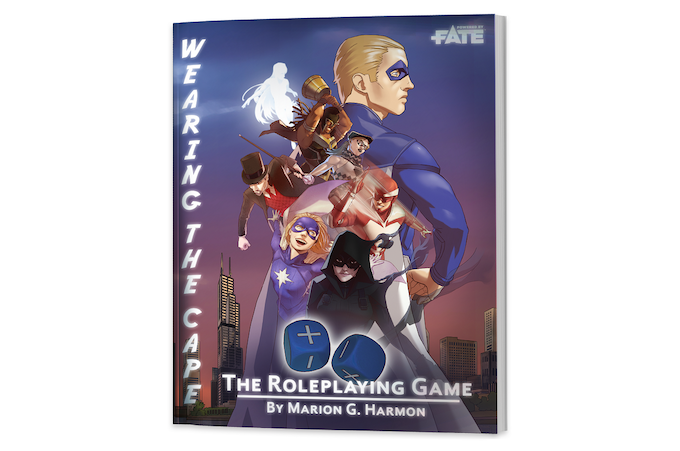 My favorite superhero novels are in the Wearing the Cape series by Marion G. Harmon. The series is humane, well-written, and one of the rare superhero treatments of time travel and its consequences that builds (and foreshadows) an interesting story instead of stumbling over itself. The plots are worthwhile, the characterization is excellent, and though I sometimes disagree with the author's politics and politically-informed worldbuilding, those spots make for interesting thinking.

Harmon has always talked about his interest in roleplaying, and he's now in the last four days of a successful Kickstarter bringing his Wearing the Cape world to the FATE system. So far I haven't been a FATE player. I'm finally going to give the system a serious spin via Wearing the Cape.

One of my favorite things about the Wearing the Cape books is how well their fight scenes express the personalities of the characters. Jeff Grubb wrote about this in the Kobold Press book, The Kobold Guide to Combat. Jeff's essay is called "Why we Fight: Combat as Communication." When I read Jeff's essay, the first thing I thought of were the three books of the WtC series that had been released at that point. I'm happy to say that later books in the series have lived up to the early books' promise on this score. I suspect the RPG system can handle this well, so I'm looking forward to the release of the rulebook, which should happen via PDF a week or two after the Kickstarter ends. Yeah, this rulebook is finished.

Even if you're not interested in the Kickstarter, look for the Wearing the Cape books for great examples of combat scenes that communicate who the characters are, and why we should care.
Posted by Rob Heinsoo at 11:06 AM No comments: