One of the players in our gaming group stepped up to run 13th Age for us, specifically Eyes of the Stone Thief. That means Rob and I can play side-by-side for once instead of one of us being the “Age Master”. The players in our group call us “Age Master” when we GM, mostly as a way to make fun of us a little. Rob’s playing a monk who’s descended from rakshasas, which is perfectly normal for him. I’m playing Cyll, an aasimar cleric reskinned as a sophisticated master of ancient spirits. For this campaign, we reskinned a couple of the familiar tropes, mostly because I love to mess with things.

The Mystic: In place of the Priestess is a New Age figure known as the Mystic. We considered “Prophet” and “Guru”, but “Mystic” has the right connotation of mystery and perhaps ineffability. Unlike the Priestess, the Mystic is woolly-headed and noncommittal. He sees all things, good and evil, as part of a magical matrix, all of which is sacred in the eyes of the One Mind. He’s also sure that the Crusader is just fine, albeit easy to misunderstand. The Mystic’s sure that everything will turn out all right. In fact, everything already is all right if only we had the mystic vision to understand… Physically, the Mystic is the spitting image of Deepak Chopra, down to the Lenses of Mystery (Chopra’s eyeglasses). My character has a conflicted relationship with the Mystic, which is where this new take on the Priestess started. Maybe it will turn out that the Mystic is right about everything and my so-called spiritual character is just dead wrong about him.

The Archmage: Several of the characters are associated with the Archmage, mine positively. We decided that the Archmage would be the opposite of the Mystic: all competence and business. She’s the spitting image of Angela Merkel, maybe the most bad-ass woman on the world stage today. If the Archmage turns out to have a fatal blindspot, I won’t be surprised.

My “Cleric” and Clerics in General: My character uses the cleric stats, but he’s not a cleric. Instead, clerics in this campaign are slow-motion healers, and the instantaneous stuff that my character does is special to him. It’s the power of the spirits that he has contact with. I’ve renamed each spell or cleric power with a spirit name, and casting the spell means calling on that spirit. They tend to be family names, such as Big Sister for Heal, Grandfather Soma for Shield of Faith, and Monkey’s Uncle for Trickery-Domain effects. (The other spirits don’t like to associate with Monkey’s Uncle.) I also swapped in the rogue’s Smooth Talk talent as my “Spirit Voice” ability.

Aasimars: My character is a member of the Yzern clan, and ancient family known for arcane wisdom. We’re especially prominent in Newport, where clan members nepotistically help each other get established and take advantage of new opportunities. What most people don’t know is that the blood of angels courses through our veins. I picked the aasimar race for flavor, but probably I’d have been better off as a human. As an aasimar, I have a glorious head of wavy black hair that swooshes about as I turn my head, but I could have that as a human, too.

Here’s a photo of my mini and the new set of dice I got from a friend. They’re translucent, with wavy green color inside the die. 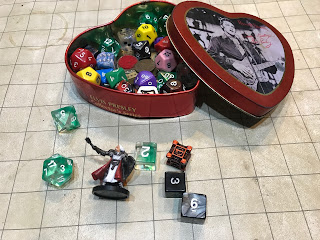 On the topic of 13th Age, take a look at one of our latest releases, Book of Demons, available at the Pelgrane store and DriveThruRPG, in hard copy or PDF. Given the number of demons we've been fighting, I think our GM has plans for it.

https://www.drivethrurpg.com/product/251272/The-Book-of-Demons
Posted by Rob Heinsoo at 12:02 PM No comments: