Cleaning my desk I uncovered an envelope with two stories scrawled on its back, stories I heard in two of the rare moments I wasn't carrying a notebook.

The top of the envelope is a list of curious but ultimately non-remarkable attributes pertaining to a friend's cousins. They add up to a compelling clan in a Hillfolk game set on the 7 hills of Seattle.

But the bottom of the envelope is where things get interesting. We were hiking a ridge trail near Hurricane Ridge with ominous clouds in the distance. The conversation turned to lightning strikes and the woman passing us on the trail entered the conversation.

"My grandfather got hit by lightning three times."
"What? Three times?" I said. "Um, clearly he survived at least..."

Yes, he had survived all three lightning strikes. I believe she told me that he was still alive but not up to hiking any more, so they'd come up the Ridge without him.

Of course I wanted the details so the full story came out in about ninety seconds while she waited for the rest of her family to catch up.

Strike #1 was when her grandfather was in school. He was sitting at a desk just looking out the window and lightning came through the window and blasted him out of his chair. Didn't hurt him much though.

Strike #2 was worse. He was in the Air Force during WWII and he and two friends wanted to get back to the barracks quickly from the mess hall. Reconstructing my notes, the situation was complicated by the fact that the grandfather had suffered some sort of leg injury, he was on crutches. His two friends decided to rig up some carrying arrangement and then instead of going the long way around they cut through a drainage culvert. And that's where the lightning hit them and both his friends who were carrying him died.

Strike #3 came when his B-17 was hit. I didn't write down whether he was a pilot or a bombardier or a navigator or a gunner, but I did write down that the hit when he was in the B-17 left him blind for 6 months. But he recovered and ended up flying 25 missions for the USAF and 27 more for the RAF maybe not in that order.

"Wow. OK. Thank you so much for that story."

There was no sign of thunder in the clouds but if I was him I'd avoid hiking Hurricane Ridge even if my knees could handle it.

The good news is that no one got hurt. As good news goes, that's pretty much the absence of truly terrible news.

Chris has been doing great work on 13th Age. You can see most of the laid out final book (8 of 9 chapters) if you are one of the many people who have pre-ordered the game from Pelgrane Press. Cal Moore and I had sent comments on six of the nine classes in chapter 4 back to Chris and were waiting to comment on the remaining three classes after Chris caught up with the earlier work.

I have more to say about restarting the layout (a job that should go much faster the second time through) and working on 13 True Ways (finishing monk second-draft today, working on battle captain). But I'm going to wait until Monday to give a full assessment. I confess that my personal reaction to this type of setback is to communicate in private and spend time working harder instead of communicating widely. I'll get over my old-fashioned approach next week.

If there are any Pelgrane books you've been waiting to pick up until the right moment, the moment is here.

This is the first completed piece of Monster Art +13 from the 13 True Ways book. As you can see, Aaron McConnell had a lot more in mind than the striking parallel lines of the original Mantis vs. Mantis sketch. Aaron expanded the piece and did the initial colors and true to our team-up plans, Lee finished the composition.

Our backer, the Dormouse, is thrilled, and she's buying a second copy of the print to have for herself since the first will be a gift. If you'd like to buy a copy of the print yourself, email Aaron at aranmcconnell@gmail.com, he will eventually have a store operating but for now it's on a talk-to-him basis. You could also talk with him at Emerald City ComicCon this weekend, he'll be one of the Fire Opal people at the show. Me? Not as much. I'm spending the weekend helping with the final steps of the core book layout and working on monk forms that include the Deadly Mantis Fist. 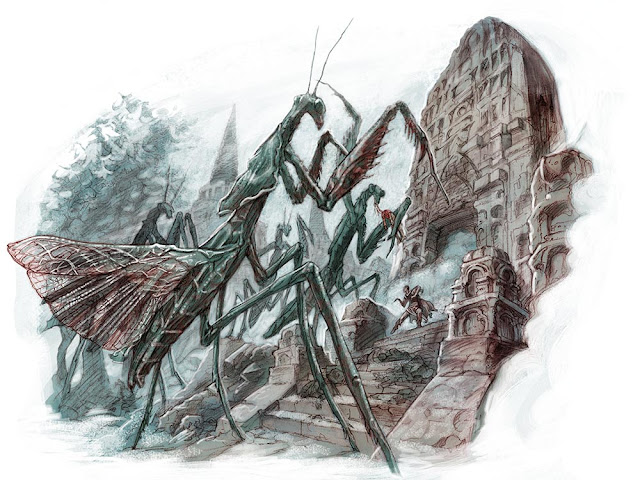