There are two great new 13th Age books in different stages of imminence this week.

Kick!
Greg Stolze’s TheForgotten Monk is the first 13th Age novel! It’s on Kickstarter to be published by Pelgrane’s Stone Skin Press imprint and it has already made its initial target. Now Greg is strettttching and he has been very generous with his early stretch goals, so if you’re a 13th Age player, you can sign on now and you’ll already be receiving stats for monsters and situations from the novel.

Just as each 13th Age campaign has its own unique plots and interpretations of icons, races, and places, Greg’s novel presents its own reasonable and idiosyncratic interpretations of subjects like elven speech patterns and Imperial law. Unlike fantasy novels connected to some other game worlds, these tropes aren’t part of a canon that other writers now have to use. Each 13th Age novel gets to make its own decisions about the version of the world it’s going to portray.

I love The Forgotten Monk! It’s simultaneously warm and humane and full of lethal violence. That would be a good recipe for a 13th Age campaign and it’s a wonderful mix for a novel. I’m not being descriptive of the contents because you should go look at the Kickstarter page and read about it there.

In Gar Land, Dungeon Hunt You
The second book is just about to hit retail shelves, and you can already pre-order it from the Pelgrane store. It’s Gareth Ryder-Hanrahan’s Eyes of the Stone Thief.

A couple words you won’t have heard already about the book: I’m jealous!

Living dungeons are one of my favorite parts of 13th Age and when Gareth pitched the idea of a living dungeon that hunts PCs and their loved ones down instead of waiting to be looted, I not only knew it was going to be special, I also had a strange creator half-remorse feeling that went something like: “That is such the perfect implementation of the idea and now I am never going to come up with it myself.”

Gar started by calling the project Moby Dungeon. It had stronger-Ahab tones early on before it became so seriously its own thing. You can catch an echo of that original starting point from the peg-legged halfling magician on the cover, gathering power as her comrade hefts a harpoon.

All Gar’s ideas were so good that it wasn’t a surprise when the project kept growing and growing and turned into a 360 page book. Calling it a mega-dungeon does it a bit of a disservice. Mega-dungeon is a nice marketing term, I think, but it implies nothing but a claustrophobic delve-and-more-delve underworld experience. Eyes of the Stone Thief takes the time to detail the surface locations that are connected to killing or supporting the dungeon, the cults and warlords who have a stake in the living dungeon’s fate.

The book is one of the most lootable supplements ever (and I’m talking to you, GMs). It’s got quick-and-dirty mass combat rules as part of a slave revolt in an enemy keep. The Cult of the Devourer. Dozens of montsers useful in all piece of the champion tier, things like the swordapus, filth hydras, and a drunken wizard. Glorious 3D maps of each dungeon level which are pure-caffeine for my imagination, even if I’m not using the Stone Thief I’m going to use those locations! And each of those levels could be the basis of its own dungeon. In fact, Gar has already written an article on the Pelgrane web site about how to chop the 13 levels of the dungeon into 13 separate dungeons.

So Gareth has done something special. I may have started jealous, but now I’m grateful. This is a campaign fun-box brimming with awesomeness. I don’t know that I would ever personally be capable of writing a 360 page adventure. And now that Gareth has written Eyes of the Stone Thief, I know that I absolutely never have to.

101 Not So Simple Monster Templates

I like this recent 13thAge-compatible DIY monster tool from Rite Publishing. The book has a not so simple origin story. It first came out in 2011 as a Pathfinder sourcebook written by Steven D. Russell. Step forward a few years and Patryk Adamski approached Steven and Rite Publishing with a reworked 13th Age compatible version. The mechanics are new, the art is new. Like Kobold Press’ and ASH LAW’s Deep Magic volume that's compatible with 13th Age, 101 Not So Simple Monster Templates is a book that is inspired by the previous Pathfinder RPG edition rather than a straight conversion which is confined to the original mechanics.

What you get from this Rite Publishing book is an alphabetical list of 101 conversion templates for customizing monsters on the fly. Many of the templates add a level to the monster, so that the impact of the template’s new abilities and powers get offset by lower stats. A few of the templates, like Burned Out Creature or Unhinged Creature, go the other way and reduce the creature’s effective level.

There are a couple niggling problems. A few of the templates use language that’s different from standard 13th Age terminology, but not so different that it’s difficult to figure out. A few other templates almost certainly err on the side of being too nasty. Resilient, for example, has got to be missing its level adjustment.

But balance issues are minor, particularly in a system that advises GMs to regularly make battles unfair! If you’ve been running 13th Age, you’re going to be able to recognize the few too-nasty templates easily, they’re not subtle.

I’m especially happy with 101 Not So Simple Monster Templates because its text is all published under the OGL. As a designer, I’m not likely to borrow a full template and the template approach, but there are several creative mechanics here that I’ve already borrowed or revised as elements in new monsters headed into 13th Age in Glorantha and future installments of the 13th Age Monthly. So I’ll be adding this to the list of OGL books in the licensing section of an upcoming product or three.
Posted by Rob Heinsoo at 11:20 AM No comments:

Soon you will fly on dragon back! 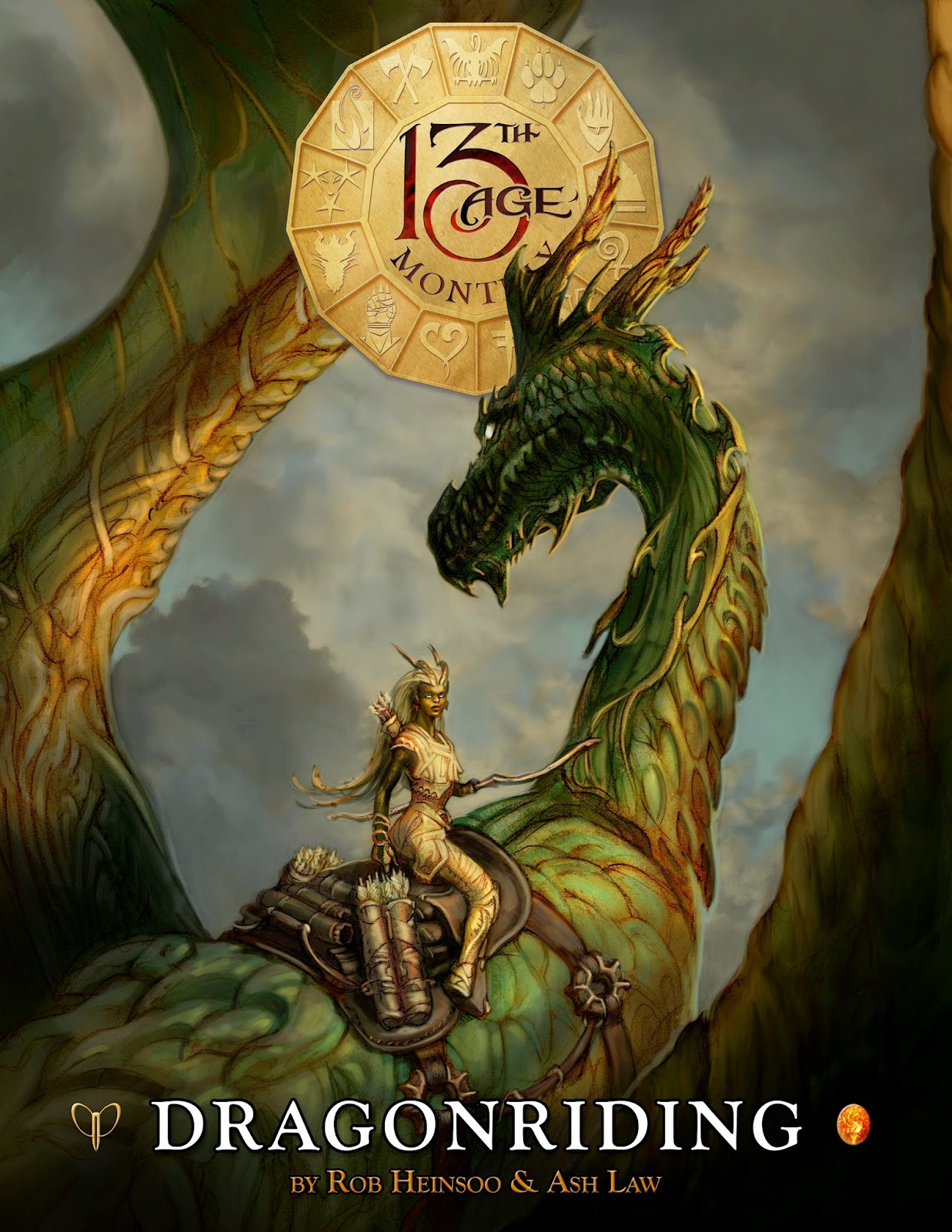 I'm celebrating the imminent launch of the 13th Age Monthly!

I'm also celebrating what may be my favorite cover ever, painted by Lee Moyer as an upgrade of the Feathered Crown illustration he and Aaron McConnell originally created for 13 True Ways.

Those of you who backed the 13 True Ways Kickstarter will be getting this first installment of the Monthly for free, since dragon riding was part of that book's original flight plan.

Pelgrane will be announcing the rest of the business details for 13M in the next few days.  The model will be similar to Pelgrane's splendid Ken Writes About Stuff subscription.

I was going to type out more details about the project. Then I remembered that I'd already watched Wade Rockett copy-write the basic description of the Monthly for the upcoming web announcement. So here's Wade's text. You'll be seeing it again soon on the Pelgrane site along with a listing of the first three months of articles:

The 13th Age Monthly is overseen and developed by Rob Heinsoo, with a stellar list of contributors that includes Jonathan Tweet, Gareth Ryder-Hanrahan (Book of Loot, Eyes of the Stone Thief), ASH LAW (Tales of the 13th Age) and Cal Moore (Shadows of Eldolan).

It's going to be a great ride!