I'm in London for Dragonmeet alongside the Pelgrane crew!

Last year on the train into London from Heathrow, before Dragonmeet, I was reading Lavie Tidhar's The Violent Century, glancing out of the train at delapidated warehouses as the novel's superbeings negotiated the London fog.

Saturday afternoon at last year's Dragonmeet, the man wanting to talk about roleplaying games over the table at the Pelgrane booth turned out to be Lavie Tidhar! He said that RPGs weren't something he had really tried, though the friend beside him seemed to be more familiar with the genre. I gave Lavie a copy of 13th Age, and when Ken Hite came back to the booth Ken got him a copy of The Dracula Dossier.

Looking forward to seeing friends from this Eastern side of the pond in a few days.

Posted by Rob Heinsoo at 4:56 PM No comments: 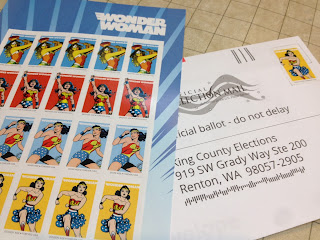 The stamp felt perfect for this ballot!

On the way back from casting the ballot, I passed Neil Stephenson, out for a stroll in the neighborhood he works in. I'll take passing a socially progressive writer who appreciates good weaponry as a good omen.

Earlier in the day, I appreciated this Rolling Stone summary of why voting for Trump is a terrible thing to do. Parts left out include the GOP's position as the major political party in the world that denies climate change and Trump not caring that Russia is mucking around in USA electoral politics because it has been in his favor. That would have been some sort of deal-breaker in previous Republican candidacies--but not this one.

Earlier in the weekend, Jonathan Tweet, Mike Selinker and Gaby Weidling and I organized a game designers' support letter for Hillary Clinton. It's called #gamers4her and it's up to 327+ signatures and still growing, as seen here.

I'm aware that Clinton isn't perfect. In politics as in creative work, the perfect is the enemy of the good. Clinton will be a good president, maybe even a great one. It's time to prove that a powerful woman can be President of the United States and make a way for great women leaders of the future.
Posted by Rob Heinsoo at 5:53 PM