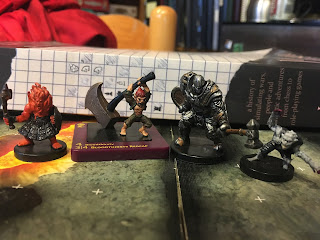 These are the PCs of the new 13th Age mini-arc we started playing last week.
While writing Icon Followers, I made up an organization ambiguously devoted to the Dwarf King called Spearpoint. As I wrote about azers, derro, and Gold King mutants who are part of a Suicide-Squad style group of potentially salvageable—and definitely DENIABLE—Dwarf King covert assets, I realized it could make a fun story for a group of player characters, not just NPCs.
People were expecting me to start running a new game none of us had played before. But I liked it less the more I understood it, so instead I switched tracks and began Spearpoint as a not-forever 13th Age arc, starting at 3rd level.
From left to right, the PCs are . . . .
. . . Tuli, a lava dwarf chaos mage who is new to the Dwarf Kingdom.
. . . Thorinn (jokingly referred to as Thorinn Normalshield), a highly disturbed/disturbing derro madness savant ("I am not an occultist; I am the Madness Savant! The onllllly Madness Savant!") who wears the shield on his back because dwarves are supposed to carry shields, and more convincingly wields a huge axe.
. . . the world's only half-dwarf, Jak Manblood, determined to prove he's more dwarf than any of these dwarves that fit properly into their dwarven armor.
. . . and a truly disturbing "hopping monk," i.e., an undeadish former (?) follower of the Gold King named something like Djkuud, pronounced to sound something like the French j’accuse.
The players agreed that they wanted to push the icons to fit this dwarf-centric story, and after some discussion, the Madness Savant, aka Jonathan Tweet, came back with this preliminary assessment of the icons for the campaign. It’s going to be fun, and it’s a great example of tweaking your lens when you want to focus on a very specific type of campaign.
Also, there are fourteen.
the King (compares with the Dwarf King): Rules "the Kingdom", a subterranean land vaster than the Dragon Empire; most of it is currently in enemy hands.
Lady Scratch (entirely herself): Mysterious enemy of the Kingdom.
the Silver Queen (the Elf Queen): Surface dwellers interact with the Silver Queen through the so-called "Elf Queen."
Prince of Shadows (same): Archenemy of the Kingdom, an interloper who has stolen the treasures that had been held safe for Ages, a worthy foe.
the Green (the Three): Wingless and tortured, the Green worms through the Underworld spreading monsters.
Grave Lord (Lich King): Vast underground chambers contain undead waiting for some future uprising.
the Sun Emperor (Dragon Emperor): Keeps surface dwellers from bothering the Kingdom
the Sun Mage (Archmage): A dwarf who serves the Sun Emperor instead of the King, it's fine.
the Imperial Priestess (Priestess): Humans eat this shit up, I'm telling you.
Orc Lord (same): He sends troops and monsters through the Kingdom, searching for a route to Axis; everyone figures the Silver Queen is manipulating him into it.
Crusader (same): Glad that the Sun Emperor has this guy so the King doesn't have to get in there.
Archmaster Slime (High Druid): A drow ally of the High Druid, leader of the "slime mongers" (subterranean-style druids).
Diabolist (same): You know, don't spread this around too much, but she has proven to be the sort of archvillain that you can work with.
Great Gold Wyrm (same): The Great Gold Wyrm is the most admirable creature ever constructed and brought to life by dwarven artificers.
Posted by Rob Heinsoo at 11:40 AM No comments: 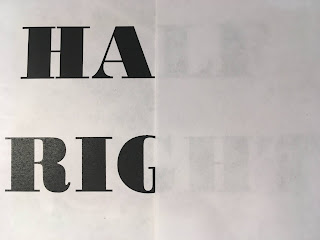 A few weeks ago, in the brave land of maskless tabletop gaming, Fire Opal ran an eight-person playtest of a fun new card game. Everyone playing was meeting between one and six people for the first time, so as we ate pre-game tacos in my game-garage, introductions sparked in various pieces of the table while esoteric conversations built in others. I noticed that one particular conversation wasn't making sense to anyone else. I can't remember whether the participants were surprised that they were being obscure, or not, but I know I suddenly had the idea for a game we could play as we ate.

Half-Right: Each player tries to come up with a question that they think half the people in the room will know the answer to, while the other half will have no idea or get it wrong.

Normally you're counting yourself as one of the people who knows the answer, certainly that's how the two successful halvings played out in our game. I suppose that if you were hardcore you might be able to come up with a question that you don't know the answer to but that you suspect that half the room will know!

Yes, it works better with an even number of players. I guess with an odd number you score a small win if half-rounded-down players know the answer and a big win with half-rounded-up. Better suggestions?

As the number of players grows, I suspect that getting close to half is worth some glory. In some groups, I imagine it's possible that no one will succeed, meaning getting close will be doing well. Obviously the game changes drastically the more people understand each other. It's not simple.

Our first game of Half-Right featured two successful interpretations of the group, a few near-misses, and a couple hilarious whiffs which no one but the questioner knew the answer to.

Follow-up: Now that I've typed it up, I'm aware that others must have invented/played this game before. It feels like something that could have been part of my social inheritance, but wasn't. Let me know if you have played the game before or if you find peoples who did.

Also let me know which name you prefer, Half-Right or Half of Us. I've gone back and forth.