a few of the things I learned at GenCon

How the hipster burned his mouth.

Ed Greenwood's helpful aide, whose name I never caught, can most memorably be referred to an Elminion.

Sandy Petersen's upcoming Gloranthan Gods War game is the answer to many of my childhood prayers. My grown-up self is feeling pretty good about it too, and as an added bonus we could use some of the minis in 13th Age in Glorantha!

E-Bay sagely eliminated the sale of souls on its auction site, ruling that souls are either non-existent or human remains, and in either case, sale of souls doesn't fly. Ken, who frequently writes about stuff, observed, "That's what Etsy is for."

The one thing we can all be grateful to Margaret Thatcher for is Warhammer 40K. 40Kcouldn't have happened without her. Thatcher had to soften up the area first.

Don't ask Will Hindmarch to fetch your balloon off the ceiling unless you are prepared to run.

When you ask the only nanny who has ever been admitted to the assassin's guild to take care of the baby, it's best to specify precisely what you mean by that. (Thanks, Cthulhuchick!).

Feng Shui 2 = More Monkeys with Helix Rippers. Atlas Games Kickstarter in September and I'm there with hells on.
Posted by Rob Heinsoo at 11:03 AM 2 comments:

This is us in Glorantha!

13th Age in Glorantha is a supplement that will bring 13th Age's d20-rolling storytelling style to mythic adventures in Greg Stafford's world of Glorantha.

I've overjoyed about the project. There is a lot I want to say about the team (Jonathan! ASH! Jeff! Jan!) and our plans and the collaboration with Moon Design. But I'm getting ready to fly to GenCon tomorrow and I've already typed out a lot of what needs to be said at this point in sections of the 13thAgeInGlorantha.com website called WHAT? and DRAFT OUTLINE.

So for now, here's a story about the triptychs below that depict me and my wife Lisa as young adults, middle-aged souls, and clan elders. Stefano Gaudiano painted us as potential members of the clan ring for the Gloranthan computer/iOS game King of Dragon Pass. 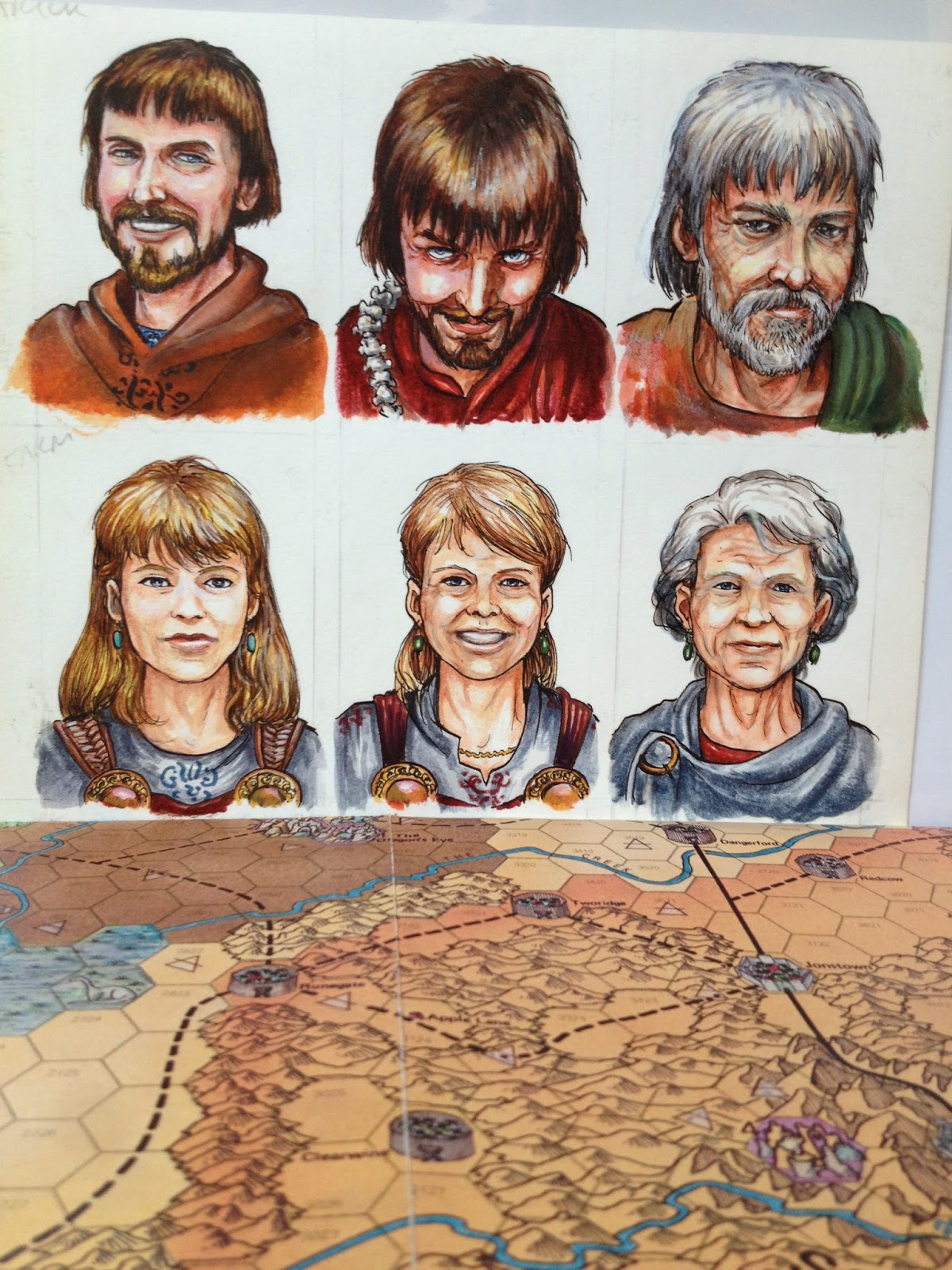 Lisa was happy about the inclusion, but then slightly less happy when she turned out to have been included as a priestess of Uralda, the cow goddess, while I got to be an Eurmali trickster!

There were two saving graces. First, Lisa's Gloranthan avatar also appeared as a priestess of the Earth queen, Ernalda, and that was alright. Second, the first time that artist Stefano Gaudiano met Lisa, he jogged across the wide lawn of Olympic Park Institute to catch up with her and said, "Oh! You must be Lisa! I am so sorry I did not meet you before I painted you! You are so much prettier than in the photo I saw, I wish I had met you in person."

And bravo for David Dunham and Robin Laws and Greg Stafford, the main architects of King of Dragon Pass, because if you're curious about Glorantha now that we're bringing 13th Age to the world, King of Dragon Pass is a marvelous playable introduction. It worked splendidly for Lisa, who is not ordinarily a roleplaying gamer.

Amusingly, KoDP didn't work quite so well for 13th Age in Glorantha collaborator ASH LAW because he just wanted to go exploring and on heroquests, not take care of his herds and his crops. His clans kept dying of starvation just as he was about to accomplish great things. In ASH's defense, 13th Age in Glorantha IS going to be all about the exploring and the heroquesting, so I may tease him about his lack of clan stewardship, but he's on the right track for our book!

Is the final 13th Age in Glorantha book going to look like the draft outline that's up on the web? To some extent, I think, just as Lisa and I seem to be following trajectories akin to what Stefano traced for us in Glorantha!

If you are dedicated 13th Age player, have no fear, we're going to treat this book with the same love and innovation we put into 13th Age, the Bestiary, and 13 True Ways. If you're a Glorantha fan, I hope you'll come along with us as we play through the myths.
Posted by Rob Heinsoo at 4:52 PM 4 comments:

My sprite-like pieces of self that get things done on the internet were busy this week. Here's a short list of surfacings. If you already caught them all, thank you and good night!

I wrote a 13th Sage column for Pelgrane Press about when it might be a good idea to let the monsters use the escalation die in 13th Age. Should be helpful to many GMs. And if you're a player it will give you a couple signs to watch out for!

Pelgrane also helpfully posted the schedule of 13th Age seminars at GenCon. Which turns out to be exactly the same as my seminar schedule at GenCon. One seminar a day, and I'll be using the Pelgrane booth as my main home base during the show. I get to team up with ASH and Gareth for a couple seminars on adventure and monster design, with Ruth Tillman (CthulhuChick) and Mike Shea and Wade for another on GMing, and then there's a Year One seminar with Simon and Wade.

If you're not going to GenCon and you still want to hear me run a game, the Reverend En Fuego's crew at BJ's Geek Nation just started posting the first installment of the game I ran for them using 13 True Ways characters. I admit that the full session didn't get around to including a lot of gaming. The character creation process took me by surprise. I usually run demos freeform and just respond to what the table gives me, but for once I thought, "Hey, I'll have something ready and actually bring minis and monster stats." So I made the mistake of preparing three different battle encounters that I thought I'd be able to choose for an action-packed first session. Of course the players surprised me with something I really wasn't ready for, so we're going to get into the meat of the adventure the next session. Was character creation and story set up fun? Oh yeah. Especially if you'll enjoy learning from my mistakes.

Most all the monsters I had planned to introduce to the BJ's Geek Nation crew were from the 13th Age Bestiary. Which coincidentally had its PDF-only version go on sale at the Pelgrane shop and on DriveThruRPG yesterday.

Meanwhile Catalyst has released the full rules for Shadowrun: Crossfire as a PDF and we have confirmation that there are going to be many boxes of the game for sale at the show! I'm not going to be helping with Crossfire stuff as much as some people in Fire Opal, I'll be more focused on 13th Age, but I will help with a Crossfire event or two and teach a few friends how to play.

Speaking of product that will be at GenCon, 13 True Ways has shipped, apparently just ever-so-slightly behind our friend Bruce Cordell's Kickstarter book, The Strange. But that's OK because Bruce started his book long after.... oh. Right. OK. The point is: 13 True Ways will also reach many people soon and will also be at GenCon!

And even as 13 True Ways is en route, the wonderful secret 13th Age project that Jonathan and ASH and I are working on is going to be announced this Sunday! ASH and I will be able to talk about the early stages of the design at GenCon.
Posted by Rob Heinsoo at 11:14 AM 1 comment: