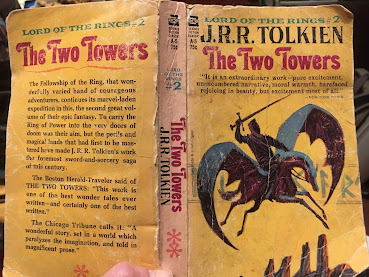 the original tome, battered but intact
As a kid, I read what I could find. Thanks to the vagaries of bookstores and the limitations of libraries, there were at least four great fantasy series that I entered via the second floor, book number two, sometimes without even knowing I'd missed the actual entrance.
Yes, this is a story about olden days.
The Lord of the Rings was my first missed doorway. My mother had the full unlicensed Ace trilogy. She wouldn't let me read it when I was in second grade, living in Heidelberg Germany, but that probably wouldn't have stopped me for long, except that our teen babysitter smoked cigarettes in our apartment and borrowed The Fellowship of the Ring. Cigarettes? Forgiven.  The Fellowship? Gone with a moving van when the girl's family got shipped off-base a couple months later.
Mom refused to buy a new copy of the book. I suspect that her arguments--the former babysitter's ongoing obligation to return the copy, and money--were screens for the fact that she just didn't want me reading Tolkien as a second or third grader. But it's also possible that we couldn't find a copy. We were in Germany, the Ace books were being outed as unapproved, and we certainly never shopped anywhere that had them for sale. About a year later Mom tried to get me to read The Hobbit, but that wasn't gonna happen, that book was for kids. Said me.
So in fourth grade, still in Germany, I read The Two Towers. For me, the Lord of the Rings didn't start with Bilbo's 100th birthday party, hooded riders in the Shire, and hapless hobbits having to be rescued from trees and barrow wights. It started with three kickass warriors--an elf, a dwarf, and a ranger--chasing orcs across an endless plain. The orcs' hobbit victims felt less hapless, given that they (spoiler alert) eventually figured out how to cut themselves loose and run away. Riders of Rohan? Keeping score at Helm's Deep! Onward! There are people who dislike The Two Towers because it's a sequence of military encounters and landscapes, punctuated by ents. For me, growing up on Army bases, trying to figure out ways to play with my Airfix Roman and barbarian armies, a book of fantasy military encounters was exactly what I was looking for. I reread The Two Towers as soon as I finished the first pass, since the Frodo stuff at the start of Return of the King made me aware I didn't actually understand what was going on.
We returned to the USA before I entered fifth grade. Our first week back, Mom went shopping at a big American bookstore and returned with a present: Ballantine's The Fellowship of the Ring. She cared that it was an authorized edition. The picture of the author on the back revealed that Tolkien smoked a pipe like my dad. We were home.
Posted by Rob Heinsoo at 3:28 PM 4 comments: