Today we’re looking at one of the mortals from the original 3DA that always struck me as a missed opportunity . . . and how it has changed now that I got the opportunity to revise the cards that were the least fun.

Here’s my honest assessment of the Archmage’s power in the original 3DA set: I can’t remember it. I remember every other card. I can never remember what the Archmage did unless I had the card in front of me. When we published the Emperor’s Gambit expansion for 3DA I started playing with custom decks and the Archmage hasn’t been invited to my table for years.

So I have to look at the original cardset again. OH. Right. It used to read, “Pay 1 gold to the stakes. Copy the power of an ante card.” Let’s count the ways that was bad.

Why did mortals cost 1 gold to play in the original set? It wasn’t for play balance. Back when I came up with 3DA I had the notion that it was meant to a game all about dragons. Mortals, I thought, might have wild powers, or might not, but there needed to be an expected cost for playing them. The same reasoning originally led me to rule out color flights of three mortals.

By the time I designed Emperor’s Gambit, I understood that forcing a 1-gold cost for playing a mortal was a silly/meaningless game mechanic with no story payoff. The mortal tax went away and it hasn’t been missed.

But speaking of story, what was I doing making an Archmage, a powerful wizard, so dependent on ante cards that are by definition almost always cards that someone has decided aren’t worth playing? Maybe the card offered a hint of a gambit-opening tactic: “I could put a high card in the ante, make everyone ante a lot of gold, and have a good chance of using that card’s power through the Archmage as the first player in the round.” Maybe, but so what? That tactic seldom qualified as the smartest use of good cards. Even when it triggered its power, the original Archmage was usually reduced to stealing a few coins or cards from the ante. It rarely seriously affected the game. 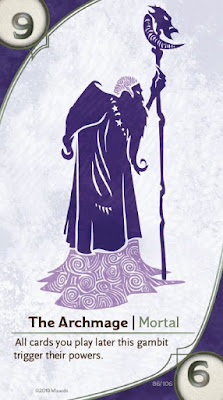 The first goal with the new Archmage was to live up to the card name with a power that feels magical. The second goal was to change the power into something that can affect the way you play. Playing the new Archmage early in a gambit may paint a target on you for your foes’ Red Dragons but it’s also going to ensure that the high or middling cards you plan to use to challenge for the stakes will trigger their powers no matter how puny the flight of the player to your right.

As powerful magicians who generally favor the side of Law, it’s not surprising that Archmagi would rather not team up with Copper Dragons! If you play a Copper Dragon after triggering the Archmage, you must want to throw a little Chaos into your flight.

Three-Dragon Ante: Legendary Edition should be on shelves in about a month!