Numenera and the History of Plunder

I had a wonderful time at Dragonmeet and in London with the Pelgrinistas. One of the happy discoveries on returning home is that my 13th Age co-designer has a a guest blog ready to roll. Over to Jonathan.

Now that Bruce Cordell’s and Monte Cook’s Kickstarter campaign for The Strange is over, we can once again pay attention to Numenera, Monte’s new RPG about exploring the mind-boggling world of the far future. Numenera is remarkable for, among other things, its emphasis on loot. The game is explicitly about exploring the mysterious world and recovering wondrous artifacts from ages past. Many of these devices are powerful enough to influence the course of a game session or campaign. They’re game-changers. In some ways, this emphasis is a return to original D&D and a reversal of a general trend in RPGs away from loot.

In original D&D, there was precious little to differentiate one fighting man from another, other than magic items. Fighters had no skills, powers, or tricks, just stats. But loot found in the dungeon made one fighter different from another. An elven cloak made one character invisible, while a necklace of missiles let you throw fireballs. Magic items dropped randomly, based on big percentile tables, so they could be disruptive. The level of a treasure determined the chance it included a magic item but did not influence which random of magic item you found. If a low-level character randomly found a big magic item, it changed the game’s dynamics. The party could now take down monsters that had outclassed them or avoid obstacles that would otherwise have stymied them. Our campaigns were thrown off-balance, but it sure was fun to cut loose with overpowered magic items.

With 3rd Ed, Monte, Skip, and I rationalized the random tables, categorizing magic items as mundane, minor, medium, and major. The idea was to reduce the disruptive effects of magic items, making loot less of a factor in differentiating characters. Even so, there were plenty of ways for magic items to have a big impact on play, especially anything that let you go invisible, fly, or otherwise substantially change the fundamentals of combat and dungeoneering. In 2007, Fourth ed took normalization even further. Magic weapon abilities, for example, were all made modest enough that each one was less valuable than an additional +1 on attacks would be. A +2 weapon with no ability is better than a +1 weapon with the best ability. That approach ensures that the weapons’ special abilities can’t disrupt game balance. Thirteenth Age follows this logic as well. Outside of the F20 tradition, loot has generally been even less important. My own RPGs (Ars Magica, Over the Edge, and Everway) have little loot to speak of, and you see much the same in Champions, Call of Cthulhu, Vampire, Feng Shui, and other significant RPGs.

An exception that proves the rule was my slim RPG Omega World, a d20 take on Gamma World. I created that game specifically to recapture some of the disruption that had been balanced out of 3rd Ed. Omega World was meant as a change of pace, without the balance necessary to handle campaigns of indefinite length. Random good luck and random bad luck were built into the game’s DNA. Like Gamma World before it, Omega World was about characters with strange powers exploring a mysterious, fallen world, hoping to find powerful artifacts from ages past. Which brings us back to Numenera.

Numenera takes loot to the next level. The very title of the game refers to the unfathomable technology left over from eight past “worlds.” Here, game-changing loot isn’t a problem to be moderated. It’s the core of the game. How do you get over-the-top loot without knocking the campaign off-balance? Monte squares this circle by giving each item limited uses, often one. Using crazy loot is part of the game, but the action doesn’t spiral out of control. Monte has preserved for us something that most RPG designers have left behind—preserved it and advanced it. It’s exciting to see Monte bucking a nearly universal trend and giving players an experience that’s hard to find elsewhere. Numenera successfully advances classic roleplaying tropes in ways other than loot, such as character identity and dungeon crawling, but discussion of those will have to wait for future posts.

Reading early reviews for my new card game, Night Eternal: the Game, has been amusing and educational.

The game is from the backstory of the True Blood HBO series. When I say backstory, I mean way back, back to the late Middle Ages when the vampires' world was split between two factions, the ruling Authority and the Monarchy, former rulers who clung to older and more overly violent ways. This isn't a game about Sookie Stackhouse and vampire lover quadrangles. It's a game of cutthroat Medieval-vampire politics.

Several reviews have noted that the game has similarities to Three-Dragon Ante (3DA). True. Also, apparently to Richard James' Lords of Scotland, which came as a surprise to me since I'd missed that Lords of Scotland from Z-Man is a game with mechanics partially inspired by 3DA.

I originally designed Three-Dragon Ante (3DA) to be a sort of anti-poker, a quasi-gambling game that used micro-rewards and kept everyone playing instead of encouraging constant folding. 3DA lacked wagering dynamics and didn't do much with bluffing. Night Eternal starts with mechanics similar to 3DA but structures them around a contest for two separate pools of blood each battle, one from the Monarchy and one from the Authority. You can only win one of the two blood pools and one of the two starts double the size of the other. Consequently, bluffing about which prize you're aiming at is a big part of the game's strategy. Micro-rewards compete with temptations to go for the two macro-rewards.

Corey Jones of Cryptozoic wanted this game to be something that the vampires of the world of True Blood played to stay in touch with the past. In the old days they probably played it using humans as currency. So another design theme is that the game is a bit nasty, especially the abilities of the Immortals cards, unique vampires that come out of a deck that's separate from the normal Agent cards. Get hold of a few Immortals cards and you've got a shot at springing a nasty surprise on the opposition, but to obtain the Immortal you either had to play low or play smart. The one friend who I won't recommend the game to recently told me that her three children had finally learned how to play games together without fighting. Night Eternal is the wrong game for that family until they have a couple more years of gaming-without-conflict under their belt.

I'll have more to say about the game, here and elsewhere, but at the moment I'm about to get on a plane to fly to London for Dragonmeet. So I'll finish with a couple promo card images from the artist, Kieran Yanner. Yes, if you're an RPG fan you've been seeing Kieran's splendid work in Numenera. I was thrilled to find that he was the artist for Night Eternal. 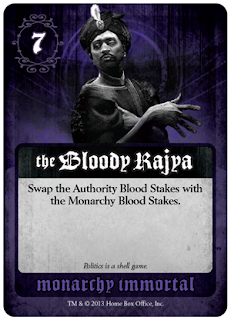 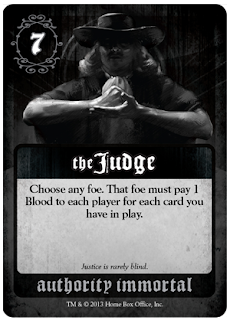