What the world needs now, is another freaking zombie

First, I've been reading Jason Sholtis' compilation of The Dungeon Dozen: Random-Tables for Fantasy RPGs. "Reading" may be the wrong word, but I've definitely been picking it up and allowing photons from its pages to slam into my eyeballs.

Second, I like the way one of the zombies in Cal Moore's Shadows of Eldolan adventure randomly ends up with a pumpkin stuck on its head and keeps on fighting, since hey, what does a zombie care? I started wondering if there was another interesting zombie I could insert into a crowded market-scene, and the mook below is the result.

My guess is that the coin zombie is a necromancer's attempt to answer the age-old problem affecting most zombie attacks, which is that normal people start running away when zombies attack, and people run faster than zombies. A small expenditure of coins, an enchantment based on mortal greed, and you've got a zombie that magically convinces its targets to stick around and be eaten.

If your PCs are the type who count every coin, feel free to let them collect coins of various denominations that add up to 1d4 gp per coin zombie after the fight. If innocent bystanders and NPCs ended up getting nabbed by the jackpot or sticking around to pocket coins, subtract a few from the loot. If your PCs are the type to track down every last coin . . . [[insert GM stage-whisper]], curse the coins. They did fall out of a zombie's guts, so they were cursed to begin with.

We’re not sure where you got the idea that treasure falling out of dead monsters was a good thing, but it wasn't from this booby-trapped horror.

C: Lethal jackpot +7 vs. MD (1d3 nearby enemies/bystanders)—3 ongoing psychic damage, and if target moves while taking ongoing psychic damage, it can only move to the jangling pile of coins that fell out of the zombie's crumbling body to cause this attack.
GM: If you're feeling merciful, say that a quick action to pocket some of the coins gives a +2 bonus to the save against the ongoing psychic damage. (This GM message brought to you by Jonathan-Didn't-Write-this-Monster.)
Limited use: 1/battle per coin zombie, when that coin zombie is dropped to 0 hit points.

Headshot: A critical hit against a coin zombie cancels one mook’s lethal jackpot ability that turn, though if the crit eliminates more than one coin zombie, others will still trigger their own lethal jackpots. 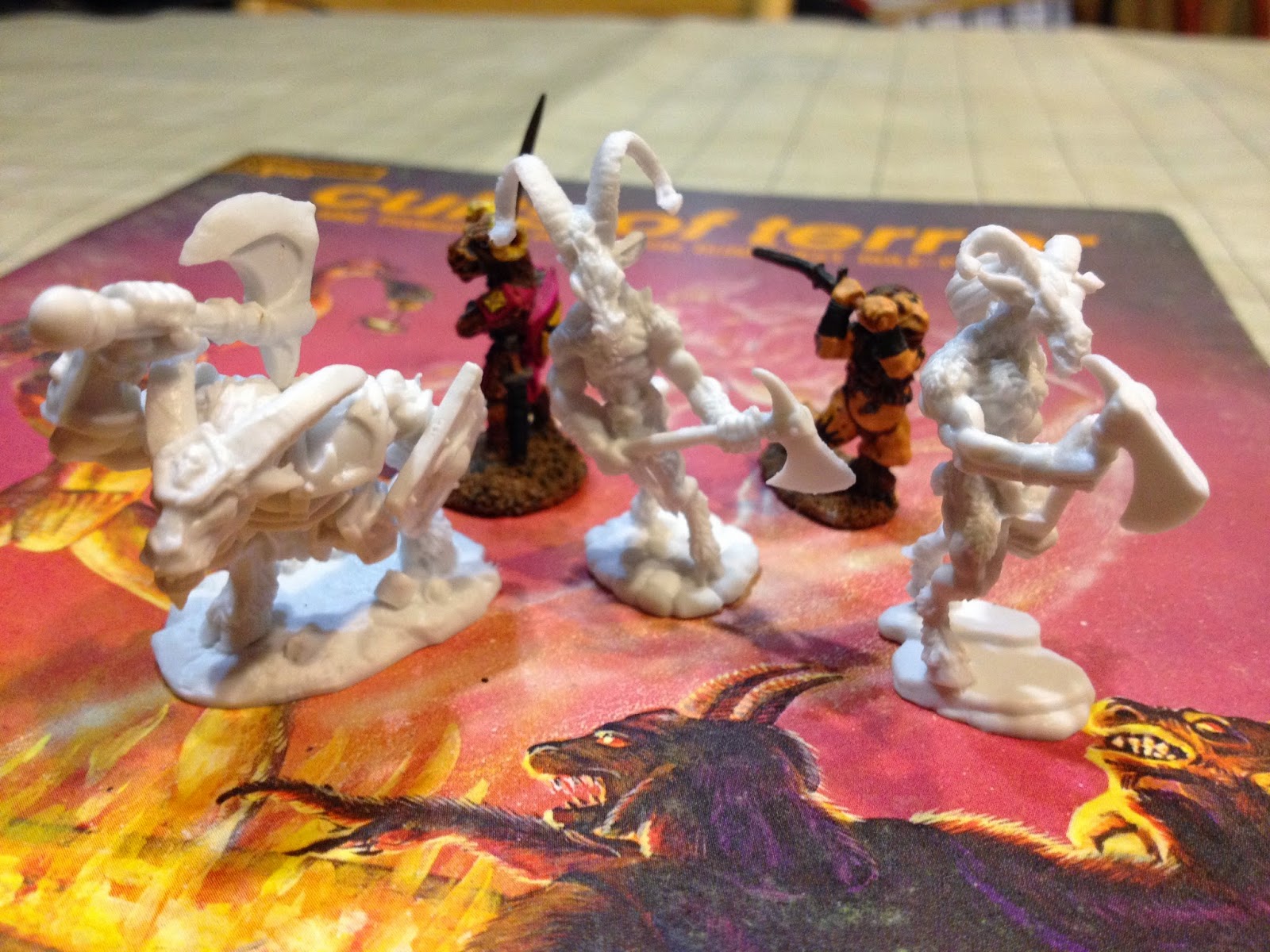 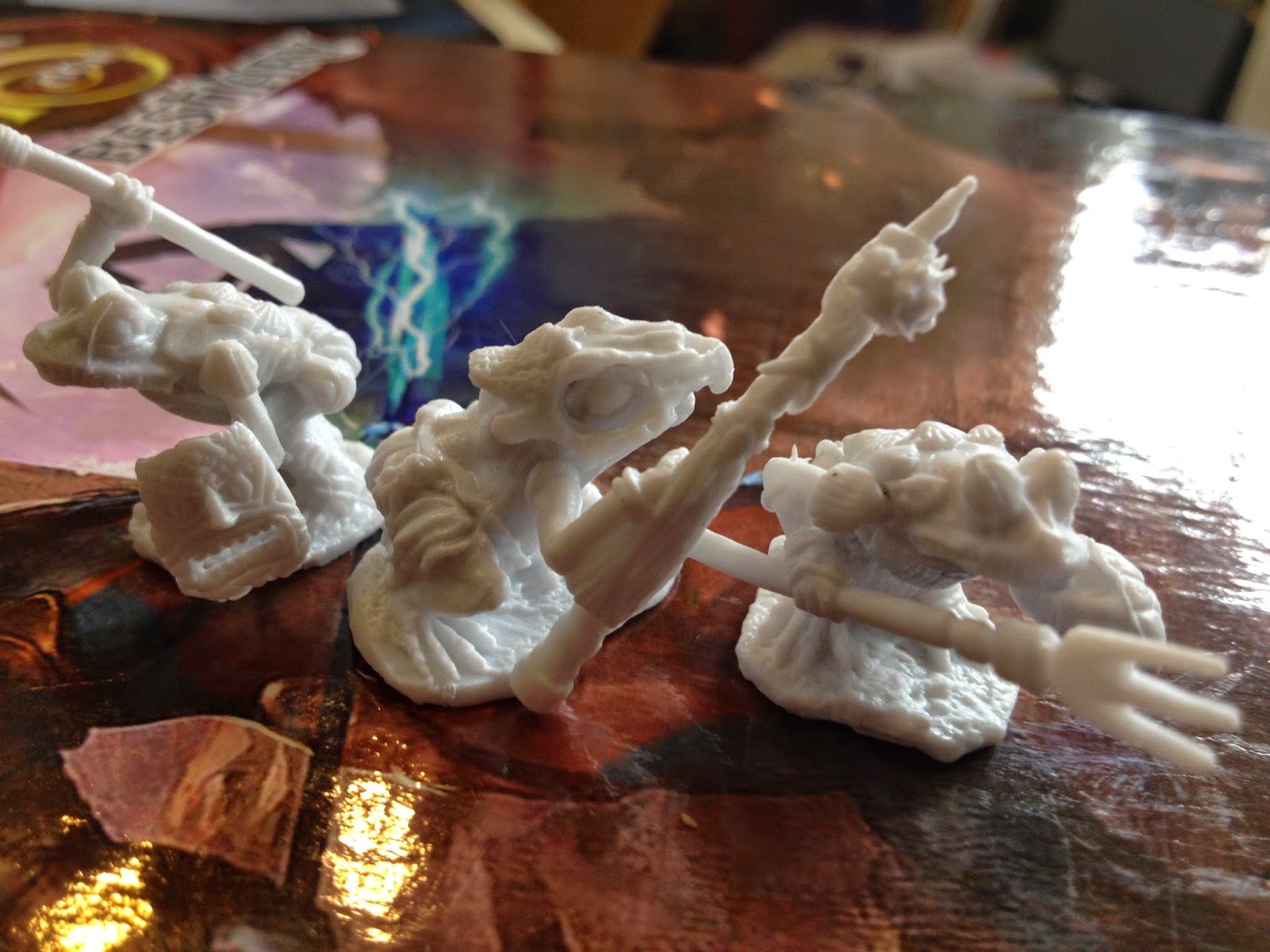 If you're not sure that frogfolk are your thing, here's a review of the piece from someone who was skeptical and then won over. I appreciate his notes about the article giving just enough information to spark the imagination and then stopping and letting the GM/players take over--that's the balance we're aiming for. As of today, Friday the 13th Age, Temples of the Frogfolk is also on sale at Drive-Thru RPG along with the 13th Age soundtrack and the Shadows of Eldolan 1st level adventure at 13% off. Offer expires Saturday the 14th.
Posted by Rob Heinsoo at 1:39 PM No comments:

No, that's not the actual title of the soon-to-arrive sequel to Epic Spell Wars in the subject line. I don't actually know the title of the expansion yet. That's the kind of detail I'm OK learning as a surprise, and along with most of the card names, it's one of the creative elements Cory Jones adds while he and Cryptozoic are harnessing Nick Edwards' never-risk-an-underdose art.

Nick's art was a big hit on last week's episode of Tabletop. Wil Wheaton and friends (thanks, Boyan!) taunted, cackled, and romped through one Epic Spell Wars battle. It was a hilarious episode and perfectly captured the spirit in which the game is meant to be played.

I don't think we've released much information about Epic Spell Wars II yet, to the extent that this may be the first that some people know it's in the works. In the spirit of the game, here are Eight Fact-Like Factoids about Epic Spell Wars II. Unlike the Fact-Like Facts from Scott Bateman's Disalmanac, more than half of these ESW factoids are true. Five of eight truths, to be precise.


1.      Creatures that roll well for Power will stay around and fight for you again next turn.
2.      Food cards heal you and are even more powerful if you physically spill food or drink on them at the table.
3.      Game mechanics experiments with victory points didn't work out, but those mechanics morphed into a blood point system that add choices by providing a resource that can power up some spells.
4.      The cardboard Standee included in the box now has gameplay relevance that may change your plans for a turn.
5.      The cardboard Standee in this set flies like a helicopter if you hold it upside-down and spin it real fast.
6.      This is a full stand-alone game, with spell cards and treasures and Dead Wizard cards and all the rest, but it can also be added seamlessly to the existing cards for Epic Epic Spell Wars.
7.      The physical rulebook is supplemented by an audiofile New Rules Summary read by Wil Wheaton in the voice of Krazztar the Blood'o'Mancer.

I don't think you can go wrong paying $6.95 at the Bundle of Holding to get hold of Robin D. Laws' Hillfolk and diverse series pitches from a weighty proportion of the skilled rpg writers in the world.

But you can go wrong if you wait more than twenty hours to take advantage of the offer. It ends tomorrow.

If you've been following Robin's games from The Dying Earth through Heroquest and Skullduggery, you know he's been on a quest for narrative roleplaying mechanics. Hillfolk is the culmination of the quest. Its expectations aren't like the procedural games I usually design and run, it's focused on stories about who wants what from whom and what the dramatic consequences will be, not who can slay who using which spells. It's certainly been good for my thinking to be involved with the game and its dramatic cousins, so if you've held off from dipping into Hillfolk because it's not the style of game you usually play, now is a good moment to experiment.
Posted by Rob Heinsoo at 2:34 PM No comments:

GottaCon in Victoria, the first weekend of March, is a wonderfully balanced gaming convention I recommend to anyone in the Pacific Northwest.

By balanced, I mean that the convention manages to make roleplaying gamers, miniatures gamers, board gamers, and digital gamers feel that the convention is about them. Throw in a well-thought-out emphasis on diversity and a slate of fun panels and it's a convention I'm headed back to next year.

I said "yes" to attending as a guest before my current March Deadline-March for the 13th Age in Glorantha book became clear to me. I've had to turn down other convention appearances because I need these weekends for work.

But I've got no regrets about GottaCon other than that Lisa couldn't come along to enjoy the boardgaming and the great room at the Empress. I made new friends, had some great talks with Seattle people I haven't seen much in Seattle, got a demonstration of Ryan Macklin's upcoming Backstory cards, ran a hugely fun session of 13th Age in Glorantha, and for maybe the first time in two years got to play a new boardgame without being the person who already knew the rules.

The boardgame was King of New York. I'd played the early and final versions of King of Tokyo but wasn't entirely happy with the mechanical disincentives for doing the things that should have been the coolest monster stunts to pull off. I'm thrilled that King of New York fixes my qualms about gameplay in King of Tokyo. King of New York is a great game I'm looking forward to picking up soon.

I'm not saying much about the 13th Age in Glorantha playtest session because it was the playtest scenario, and we're not talking much about the playtest in public while it's running. But I will mention one of the early scenes, when the character who was the greatest poet in the world wanted to try out his new poem at the toughest tavern in Alda-Chur. Alda-Chur is pretty much a war zone, and it's not the typical fantasy world with taverns everywhere, so the toughest spot in town turned out to be a Storm Bull bonfire where they'd unearthed a hidden cache of Lunar wine. The poet did his best (failing forward quite memorably), the trickster got the snot kicked out of him, and the players who were new to Glorantha (which was to say, nearly all of them) lamented that it would be extremely hard to be a successful poet in a world in which you couldn't write romantic lines about the moonlight (what with the moonlight being Red and Chaotic).

A few pieces of GottaCon were recorded. I'm not sure yet about the Kickstarter panel Jonathan Tweet and I were on. Judged by how much I learned from the other panelists, Jordan Stratford (of the Wollstonecraft Detective Agency), Joanna Gaskell (of Standard Action), and Kyle Elliott (of too many successful Kickstarters to name), the Kickstarter panel was good. The earlier Creating Hooks 101 panel/workshop was also ton of fun and that recording is already available for your ear buds.
Posted by Rob Heinsoo at 2:57 PM No comments: