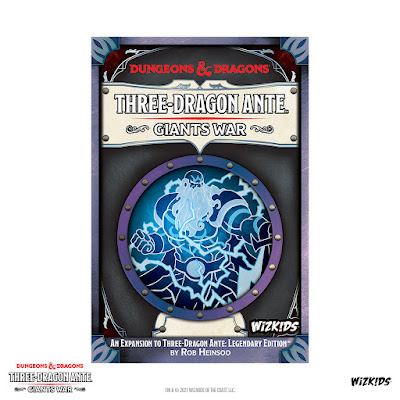 This new set of blue-backed cards introduces 4 colors of good giants, 4 colors of evil giants, 3 colors of dragons, a full pantheon of giant god cards, and rules for fighting for a giants’ stake and a dragons’ stake each gambit. (Hint: you only score your flight for the stakes you are strongest in, so feints and strategy-shifts abound.)

The backstory of the game is based on the Thousand-Year War between the giants and the dragons, back when the world was young. The history of the war appears on page 19 of Volo’s Guide to Monsters. Short version: the giants lost their world-spanning empire. The game might be a bit of a sore spot for the giants. . . or maybe they like the reminder that they were once in charge, and could be in the future?

I’ll have more updates later. For now, let’s go through the three cards shown in this preview image! 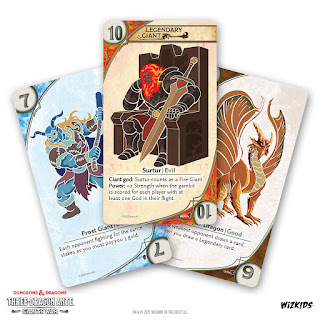 Frost Giant: One of the four colors of evil dragons, of course. Relishes competition, when its power triggers you collect gold from anyone else competing for the same stakes. If you’re playing first in the gambit, or slipping in to try and take a stake without any competition, you’re not giving the Frost Giant the fight it wants, so it won’t earn you any extra gold.

Surtur: Yes, the set comes with the full pantheon of giant gods! The giant gods, dragon gods, legendary giants, legendary dragons and legendary mortals get shuffled into a single Legendary deck at the start of the game, with six cards from that deck shuffled in with the normal deck of giants and dragons. Many cards’ powers let you draw a card from the new Legendary deck, so there’s a decent chance that Surtur might be competing with other gods. He’s worth at least +2, a total of 12 for the Giants, if his power triggers, and when your opponents are taking a gambit seriously he could be worth more.

Copper Dragon: A new Copper Dragon card! The original Copper Dragon is still great for games that don’t use giants and the Legendary deck. But the original Copper Dragon power, that adds a random card to your flight and triggers its power, is not much fun when you’re carefully managing which stakes, dragons or giants, you’re fighting for. So the new version plays off the Copper’s gregarious nature—your weakest opponent gets to draw a card, and then you draw a card from the Legendary deck. This type of sympathy for the weak isn’t the type of thing the new giants cards go in for, but you’re fighting for the dragon stakes and maybe setting yourself up with a power card.

Posted by Rob Heinsoo at 2:53 PM No comments: