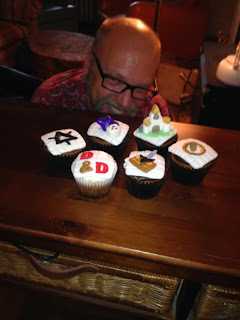 Jonathan had a birthday this weekend, with personalized cupcakes arranged by his girlfriend Stef.

Jonathan had asked for presents to be given to charity in his name instead of given to him, so it was just as well that I couldn't find the present I'd intended to give him. Instead he handed me the slip of paper pictured below, torn out of next year's desk calendar that he clearly means to use as a messaging tool instead of as a calendar. 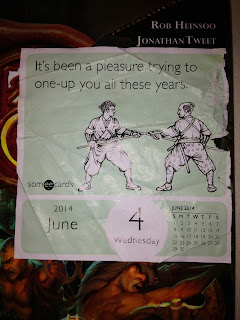 It's a good collaboration.
Posted by Rob Heinsoo at 6:27 PM No comments:

Email ThisBlogThis!Share to TwitterShare to FacebookShare to Pinterest
Labels: DnD, this week 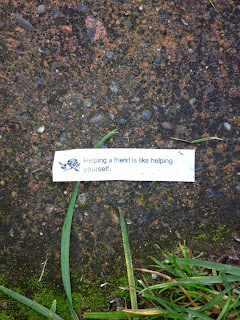 The quotes and dialogue that follow are from the last couple weeks, alternating between quotes from 13th Age game sessions and our section of the real world, far from the game table.

The photo above is apparently also from the real world, since it's what I found on the path from my house to my garage-studio this morning, dropped more or less where birds discard the pits after they've feasted on our plum trees.

Special Teams
It's time for CSI: Cleric Sorcerer Investigations.
How long have you been waiting to say that?
A little while. Not long.
Except with your autistic bard it's more like the Special Buses Unit.
The big bus . . . is just too much freedom for me.

Movement Fumble
I stepped on a dying elephant seal. And lived.

Alignment
I don't really know what position is correct.
Snake on top.
What?
Sssssssssssixty-nine.

1-point background
Yes, it's true. I worked as a phone sex operator for four weeks and didn't realize I was a phone sex operator. They always said just be welcoming and friendly to the people who would call in and it was called welcome wagon so I just talked with people. They called back!

Charity
Oh this is sad. Zombie dad just wanted the chance to take little Crispin fishing.
Don't worry. It's the Make a Lich foundation for dead children.
'It's Never Too Late.'

Truth
What good is a throne if you don't take it by force?

Royal Family
Wait a minute. How does this work? Do we ALL get to be king?
Yes. One at a time. For a very short time.
I volunteer to be the last in the succession. Just saying I'm OK with that.

Cat Stuck in Tree for One Night, but Not Two Nights (from a friend's email)
I got out my climbing harness, a helmet, and a back pack.  Up I went.....up and up until I was about 8 feet from the cat.  The tree was swaying and getting thinner and thinner.  It was starting to get dark.  I strapped myself to the tree and my presence gave the cat the encouragement to lower himself to me.  Now i am about 40 or 50 feet off the ground with a wet, scared cat clawed to the tree and it needs to get into the back pack, which is still on my back (This just maybe be the same backpack that saved us from the killer grouse!).   I am not sure how it all happened, but within about 10 minutes I was at the bottom of the tree with the cat in the bag.
Posted by Rob Heinsoo at 3:54 PM No comments:

Happy day of the Hatchling! 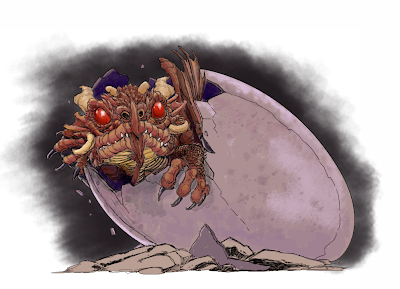 The 13th Age Bestiary is now available for pre-order and pre-publication playtesting! Like the Escalation Edition for the original 13th Age book, purchase of this Hatchling Edition of the Bestiary from the Pelgrane Press store gets you a PDF, updates whenever they're available, and then the final printed book and PDF. Unlike the Escalation Edition's many long moons, this pre-order Bestiary is already nearly finished and publishing is going to be a quick process. Simon expects to have the final book out early in 2014.

Now that the Bestiary is on its way, I'm switching back to full work on 13 True Ways with Jonathan. One of the curious effects of the Bestiary is that it's going to change the way we approach monsters in 13 True Ways. Originally we were sticking to the just-the-facts approach of the core book, very short stat-based entries. But the Bestiary shows how we can present full entries on monsters and stick with the game's half-designed-world that leaves important decisions up to each campaign. So the monster entries in 13 True Ways are going to use the full approach from the Bestiary wherever it's warranted.

But enough about the future. Check out the Pelgrane Press Hatchling Edition announcement page that charmingly lists the names of all the monsters in the book. You might have to buy the PDF to figure out what some of the base entries are, others will be clear.

We've chosen not to call out which authors were principally responsible for individual entries, so I figured for this introduction blog post I'd go ahead and list one monster that made a special impression on me from each of the other authors. Let's take it in alphabetical order by designer's first name.

ASH LAW did a lot of great work in the book. His chuul entry gets the CREEPY INNOVATOR prize for adding something to an existing monster that makes a lot of sense and opens up all manner of story ideas.

Cal Moore improved every monster as an editor, many monsters as a developer, and Kevin Kulp's whispering prophet and others as a mechanical designer.

Ken Hite made the original monster selection and assignments. Ordinarily I'd have to credit his catastrophic (to PCs) tarrasque, but I *love* the arch tone and precise language of Ken's entry for the manticore, so sorry tarrasque, you just got beat by a manticore.

You may have already seen Kevin Kulp's redcap's first appearance on EN World. I'm also pretty fond of the lammasu as epic tier creatures that may be a touch too overworldly for the PC's good.

Rich Longmore didn't design any monsters but he's doing all the art and gave us the wonderful little hatchling above so hey, he gets thanked and mentioned.

Rob Watkins wrote a psychologically insightful story for some new white dragons who are entangled with the Lich King and then did some great mechanics to back the story up.

Rob Wieland did something elegant with the story of the lich that seems likely to get a lot of use in 13th Age games and storylines. He's also got the monster that ends with z, the zorigami, and I think they're cool enough that I broke the rules again and mentioned two of his critters.

Ryven Cedrylle got a tough assignment, the intellect devourer, and, well, yikes. There are a couple surprising wrinkles in this one. Campaign impact entirely possible.

Steve Townshend has a 5th level warp beast wedged within the madness of rather larger elder beasts; I love the warp beast's shifting impact on each battle and the fact that it makes sense for all sorts of warpage.

Have fun with the Hatchling Edition and send us playtest comments as indicated in the file!
Posted by Rob Heinsoo at 1:18 PM No comments:

This Saturday and Sunday I'll be a guest at the Rose City ComicCon at the Oregon Convention Center in Portland.

I lived in Portland for 12 years so it will be a bit of a homecoming.

This time I'll be running two hour 13th Age demos and a Shadowrun: Crossfire demo near the Rainy Day Games Booth. Paul Peterson will also be there, he's going to be running Smash Up! demo and a Smash Up! tournament and a Guillotine demo. Sign up for these events will be at the Rainy Day Games booth, and the following link takes you to the calendar of events and a map.

There should be a good amount of time for just-talking. But I think the event timing means there's no way I'm getting into the Smash Up! tournament.
Posted by Rob Heinsoo at 1:36 PM No comments: 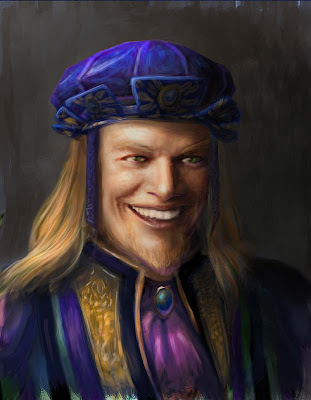 Smilin' Sammy G, as he is known to his friends, was the first of the characters created by fans who supported the 13 True Ways Kickstarter. Sammy comes to us from Alex Paciga, who created a legendary bard with a truly sunny disposition and depths which will make him *interesting* to be around.

This painting of Sammy is by Lee Moyer, of course (http://leemoyer.wordpress.com/), who conceived of character portraits as the style for the new book's chapter openings. Sammy G's portrait is presently slated for Chapter 5, the grab-bag chapter that I presently refer to as either Gamemaster's Grimoire orOlde Schoole. The hidden depths I referred to earlier make Sammy a natural fit for this chapter, but I don't want to say too much so that Alex's creation can receive his full ovation in print.

So when is that going to happen, you ask? Hopefully Q1 of 2014. There are two things that could push us into Q2: me butting heads with the developer over character class issues or Jonathan and I getting all labor-of-love and working harder to match the standard set by the core book. If we take that longer path, we'll approach 13 True Ways as we did the Escalation Edition for the core book: we'll send backers and pre-order customers a usable early draft that will keep getting better as it trundles toward the finish line. Otherwise, there's something to be said for happy surprises, and we'll only share the bits that need playtesting.

We've indulged in some periods of 13 True Ways silence while I was working on the core book and the Bestiary. We're now returning to once-a-week updates on 13 True Ways. These updates will soon include other mechanical bits. People have sent us all kinds of good feedback on the monk at13thAgePlaytest@gmail.com, and we'll be asking for your help with other aspects of 13 True Ways.
Posted by Rob Heinsoo at 11:18 AM No comments: