My Alphabet Prime playlist has 200+ songs that at one point in time, and probably for a lot longer than that, were my favorite songs. It's a playlist of music I listened to over and over that I'm still happy to hear again.

I'm counting up the alphabet a few song titles at a time, adding occasional notes relevant to gaming and travel and stories where they exist. The alphabet prime label at the right will take you to other pieces of the count-up.

The three songs in this installment have two things in common: a) dudes singing; b) many other great songs surrounding them on their albums. 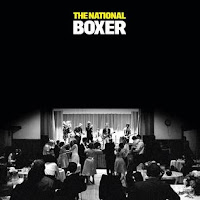 I love this album. I'm not sure whether I like it better than their other albums because it was the first album I heard from them, or because it's the best. 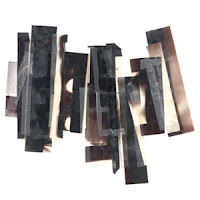 Against Pollution, The Mountain Goats.

Music, lyrics, a deadpan transition from the humdrum to lethal violence to the final days. The entire We Shall All Be Healed album feels like some sort of Unknown Armies or Over the Edge campaign, which, given subsequent roleplaying developments from the Mountain Goats, wouldn't be out of character. 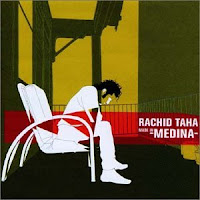 The friend who I was certain introduced me to Rachid Taha doesn't much like him and says she has never had a mixtape CD that included his songs. So my origin story of how I thought I first heard Rachid Taha while traveling with her in Hawaii is probably mistaken. Apparently many theater-goers first heard Taha on the soundtrack for Blackhawk Down, but in line with my ongoing cinematic illiteracy, I read the book and didn't see the movie. Made in Medina is a great album. I'm not sure it turns up later in the alphabet but I know Taha will.

Three-Dragon Ante: Giants War is an expansion of Three-Dragon Ante, just out from WizKids. (Earlier blog post here.) The set plays off D&D’s story of an ancient war between dragons and giants. Most of the new cards are based on D&D’s familiar giants: frost, fire, storm, stone, hill, and so on, along with Giant God cards for the bigger-than-I’d-originally-remembered giant pantheon. 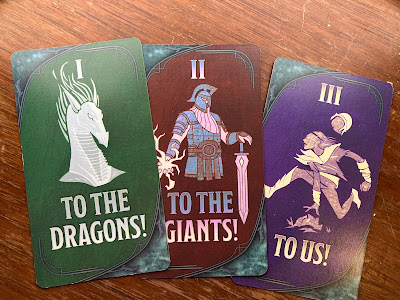 Three-Dragon Ante has always played differently with different numbers of players. With two stakes that can be won each gambit, instead of one, Giants War increases the distinctions between three-player, four-player, and larger games.

So far, in my experience, three-player games are the most likely to invoke the variant end game. If no one has won after you’ve run out of cards in the main deck and shuffled in the middle game, score three more gambits and end the game after the third gambit’s toast. To win a three-player game before the toasts, you sometimes need to push the ante heavily instead of giving opponents time to recover. That’s true in all forms of 3DA, and more true when there are three players and two stakes per gambit.

Even if you’re not playing 3DA as a drinking game, I recommend raising beverages as you toast these final three hands. And if you’re making the toasts aloud, the final toast echoes better as “To fools like us!” 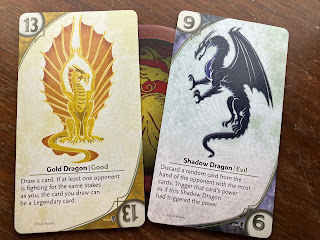 If you want to play a straight 3DA game with just one stake, all three of the new dragon suits will work so long as you shuffle the Mortals and Legendary Dragons (including the new Io and Shadow Invader) into a separate Legendary deck at the start of the game. You’ll need to play with either or both of the new Copper Dragon and Gold Dragon or the Legendary deck will be untapped. The new Gold Dragon from Giants War will always get to draw a Legendary card as long as someone else has played a card in the gambit, but if you lead with the Gold Dragon, you’ll only get a regular card.

If you’d rather play strictly with dragons and the original 3DA rules, skipping the Legendary deck, the new cards to add to the game are Io, the Shadow Dragon suit, and the Shadow Invader.

Both the new mortals—the Emperor and Ranger—will work in either variant. In fact, they’ll be more powerful than they are in Giants War games. 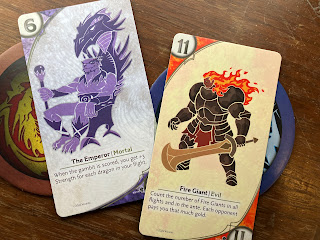 People often ask if the Emperor’s Gambit set that WotC published in 2010 going to be reprinted or revised. I’m pretty sure the answer is no, because hardly any of the dragons that were the core of Emperor’s Gambit have been brought from 4e forward to D&D 5e. 3DA licenses D&D’s dragons. Even if one or two of the iron, adamantine, mercury, earthquake, etc. dragons that populated 4e show up in 5e, I doubt the rest will appear.

So while we wait for dragons that probably aren’t going to show up, I’ve recruited some of the characters and mechanics from Emperor’s Gambit, including putting the Earthquake Dragon’s heavy-roller power on the new Fire Giant.

One more variant before I go, which started as an accident when I forgot to shuffle cards from the Legendary deck into the main deck at the start of the game!

Instead of correcting the mistake and re-dealing, I thought about it a second and decided it wasn’t bad to start everyone out with normal cards as their first hand. It feels a little bit like the “no dirt on the first trick” rules that some people use in Hearts. So, the Start-Small variant rules that you shuffle the 6 Legendary cards into the main deck after each player has been dealt their starting 7-card hand. Yes, ‘dirt’ in the form of a Legendary card might show up as you draw cards during the first gambit, so that’s a tiny bonus for people playing to draw.

Posted by Rob Heinsoo at 5:55 PM No comments: