Storybook Brawling onto a Tabletop 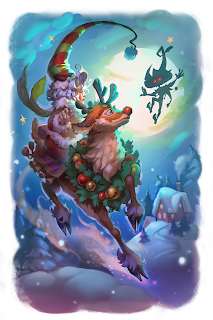 The art above is called Flights by Moonlight. It’s the first storybook image we got from our amazing artist, Ekaterina Chesalova, for the Storybook Brawl boardgame I’ve been working on the past year with designers from my company, Fire Opal Media, and other designers from Good Luck Games.

One of the coolest things about designing games is that sometimes the games you play turn into games you’re working on. In 2021, I was playing a lot of Storybook Brawl, the digital auto-battler-style game of twisted fairy tales on Steam. I knew some of the designers. I loved the game. My business partner Jay Schneider and I got in touch and we ended up signing on to design a board game version of Storybook Brawl!

If you’ve played the digital version, you’re probably aware that most of the mechanics that make the digital version tick don’t translate into a board game. The truth is that it can be liberating when mechanics are so untranslatable. We had to evoke the feel of the digital game, and the fun of its brawls, in a board and card game environment that would stay fun for players of many ages instead of gradually eliminating people until only one winner was left.

I love this type of challenge!

Sometimes my early designs are reasonably close to the final design. This was not one of those times. Jay and the rest of the development team did so much work and redesign, and along the way we realized that the way to set up the brawls at the heart of the game was with a storybook that would double as a scenario guide!

The Flights by Moonlight picture above? That’s one of the early scenes from Act II: Home Realms, showing the moment Mrs. Claus and Pan’s Shadow meet after their stories have been shuffled together. The storybook’s opposite page gives each player a choice between three Plot Twists before that round’s brawl: Workshopping (just some gold to buy better cards); From Up Here, Everybody Else Looks Tiny (the right to buy cards from your shop for a tiny price this round); and Moonlit Reconnaissance (banishing a random card and acquiring two new cards).

Yes, it’s a deckbuilding game of sorts. And each brawl leads to another story later on in the storybook, until the grand finale. I’m thrilled with the game and in love with writing storybooks for it! It’s one of those games I’m going to struggle to keep a copy of because my wife Lisa is gonna be giving it away as a gift. (Seriously: I’ve had to borrow copies of Three-Dragon Ante and Epic Spell Wars from friends because all of our copies had been gifted!)

The Storybook Brawl board game is going to be published by Dara Studios. It will go on Kickstarter later this fall. Come by booth 2400 at GenCon next week to see a prototype, check out the storybook, and to play a demo for between 2 and 4 players.

I’ll usually be at the Pelgrane booth, #423, and though I’m mostly doing 13th Age things there, I’ll be happy to talk about Storybook Brawl and will probably be at booth 2400 running/playing games now and then.

I’ll post in the next couple days about the Pelgrane-and-other-things I’ll be up to at GenCon.