This Christmas I came up with a method of wrapping presents that made me happy. It couldn't possibly be something entirely new, but I've never seen anyone do it. I don't feel like searching the internet for the people who did it first; I'm just gonna write it up!

I was wrapping a final round of presents and I didn't have enough paper or labels. I realized I had a color printer. And lots of great photos of the people we were giving gifts to. So all I had to do was print pictures of a gift's recipient on several sheets of 8.5" by 11" paper, fold and tape the sheets together to cover the key portions of the present, ensure that the face got central position on the packaging, and voila: no need for a label! For extra effect, use pictures the gift's recipient has never seen.

Depending on the size of the gift, you may have to use other bits of contact paper to hide portions of the gift. I feel like this style of 'wrapping' is more about providing the moment of opening-discovery, not trying to wrap the present tightly as if it was being probed by a 7 year-old.

This is a photo of the top of a present to my wife Lisa, two prints used on the top, taped together, featuring the moment we saw that the angel wing mural in northern Oahu had been rendered in the colors of the dress Lisa was wearing! 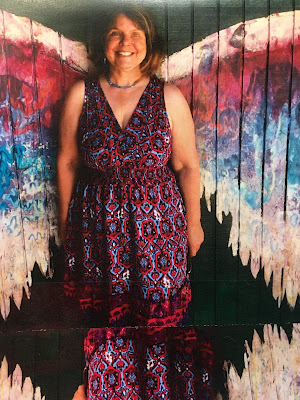 Here's part of the first draft of a section of the upcoming Icon Followers book that details a rules variant I've been using in my campaigns. It's an important part of a book of NPCs who tend to be associated with the same icons as the PCs. I'm curious to hear from people who try it.

13th Age combat mechanics handle deadly fights against monsters, but we’ve largely ignored a style of combat that could create a variety of interesting stories. What happens when a group of paladins devoted to the Great Gold Wyrm disagree with the player characters about who should take responsibility for a captured evil sorcerer who has information that the PCs need? What happens when a rival adventuring party claims first dibs on a soon-to-surface living dungeon full of phat loot, saying that they’re better prepared to deal with this particular dungeon, and that the PCs should hang around as backups? What happens when a circle of druids insists that the adventurers leave their section of the Blood Wood when it’s not at all in the PCs’ interests but also not a matter of life and death, especially given that the PCs know that these are the druids who will soon be defending the woods against monsters from the Iron Sea?

Instead of fights to the death, all the way down to 0 hit points, I’ve been playing this type of fight between semi-respectful enemies as fights to the fall, down to 33% of each combatant’s normal hit points.

You fall at one-third hp: When both sides have agreed to honorable combat, combatants drop out of the fight at 33% or less of their standard hp. They can heal themselves, and heal fallen allies (or even fallen enemies . . .) but they take no further action in the fight. Play them as crawling or limping to get out of the center of the battle, or lying still and applying pressure to their wounds. Anyone targeting them with further attacks has broken the rules of honorable combat, and forfeits.

Deaths still occur. Mighty blows—especially against determined resistance from rivals who are about to fall but don’t want to give in—can score crits and take out foes. But killing the enemy isn’t the point. You can hammer this home when rivals who have been knocked out of the fight use healing potions or healing magic to help restore fallen PCs.

Combat pacing: Use the escalation die as normal, but remember that fights generally start slightly favoring the PC’s enemies. There’s a risk of an early loss if things go very badly for the PCs, but if any of them can hang on, the escalation die can pip them ahead in the end.

For an example from my campaign, a character who had a conflicted relationship with the Three—thanks to a huge favor he had once-upon-a-time done for the Black—accepted a proposal for honorable combat from a flight of black dragons attempting to recover three half-dragon/half-lizardfolk eggs that the PCs had salvaged from a destroyed village. The PCs were attempting to return them to their lizardfolk allies, the dragons thought they took precedence over lizardfolk. Without that icon relationship, and the history it represented, the dragons would surely have attempted an ambush and thievery. As it was, the dragons badly lost the fight to the fall, and afterwards agreed to provide overflight security for the lizardfolk until the younglings hatched and were old enough to decide for themselves if they wanted to come join the Black dragon. It ended up feeling like a fail forward for the NPC iconic followers of the Three, while feeling like a kick-ass win and a good-deal-in-the-circumstances for the PCs. 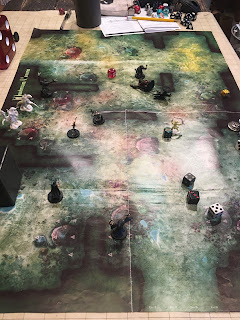 Here's the aftermath of the honorable battle with the dragons, with lizardfolk rooting for the PCs on the sidelines, skeletons summoned by the necromancer occupying the middle ground, and small upside-down black dragon where the PCs critted it to death despite the 33% guidelines..