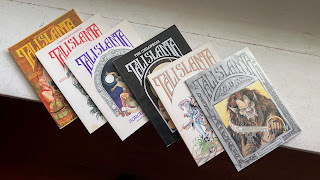 This month I raised $50 for my late wife’s favorite charity, Planned Parenthood, by shipping my old Talislanta books to a fan of the game in exchange for his donation. There are a lot of old games in my basement that need to find good homes before I move out of here, and I figure I can raise money for charity while I’m at it. In addition to regular piles of game books and cards, there are a bunch of oddball games and personal effects, such as my campaign notes from the hacked version of D&D that I ran in high school. Some stuff I can easily offload onto a local game store or something, but lots of items I would rather place personally.

Talislanta was a peach of a project for me. Revising the rules for Wizards’ 3rd edition was a fun project, and the standalone adventure Scent of the Beast was filled with promise for an upcoming “adventure path” that never materialized. It was sad to see it go but gratifying to pass it along to an old fan of the setting. --Jonathan Tweet

Posted by Rob Heinsoo at 9:33 AM No comments: