When I was a kid, my family used April Fools Day as the reference point to track my end-of-March birthday. Last year, in sunnier times, I had a big birthday party, something I usually avoid. To make it sing, our friends Elise & Aaron let us use their big-enough-for-a-big-party-house. Of course Elise went one step further: she arranged a birthday piñata, stuffed with something for everyone: Kinder eggs, fruit snacks, gluten-free cookies; chocolate truffles, dinosaurs, and so on. You can see the birthday piñata below. Elise went to the internet to find a picture of me to hit, so of course she ended up with my blog's Diabolic Tutor face, minus the tutor. 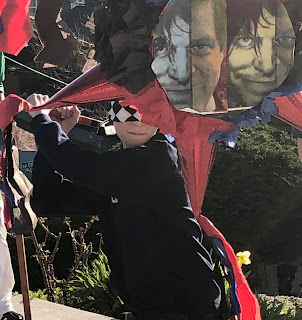 I love this Harlequinade of a photo that Lisa took while the teenager-most-likely-to-slay-the-pinata was taking his second turn. A great ending to a wonderful party.


Earlier in the party we played a game I can share. It's a human bingo game, meant to be played when you're lucky enough to be able to gather a large number of friends who don't all know each other. Lisa brought it into our lives from working in environmental education and we've used it for several big parties, including the intermission at our wedding.

The hosts make a bingo card ahead of time with items oriented towards people they expect to see at the party. If you've got kids attending, you make sure to include a number of questions that kids will be likely to qualify for, because kids turn out to be highly active participants, buzzing between circles of adults and helping make all new introductions.

As the card says, you're looking for signatures from party-goers who can say "Yes, I did that," and each person can only sign your card once, so you gotta mingle. Some people play super-competitively until they've scored a bingo, others fill the card. Choose the right categories and you ensure you're going to hear interesting stories. 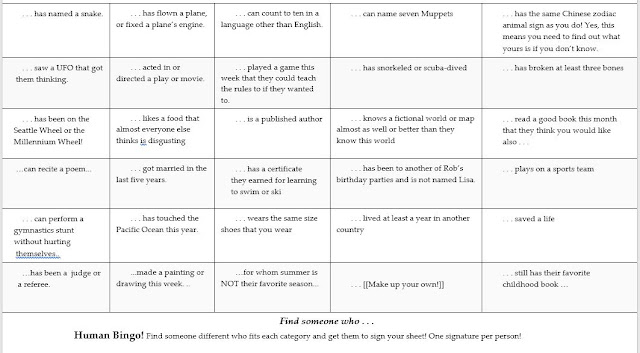 I don't reread books often. When I do, there's something special going on. Here are two books I've reread and will soon reread again. 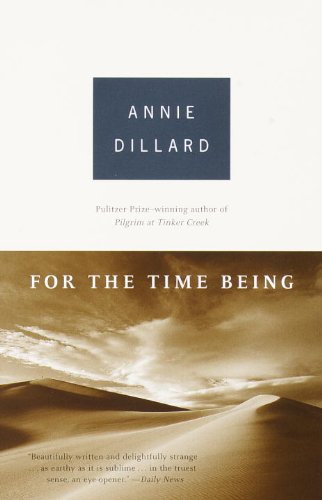 For the Time Being, by Annie Dillard
Earlier in life, I was so inspired by passages in Dillard's Pilgrim at Tinker Creek that I started seriously attempting to write. One of my college-professors slammed me for giving her "belle-lettristic" essays and after she explained the meaning of the term I had to admit that writing pretty letters sounded like a plan.

For the Time Being is the philosophy of being and mortality by a writer capable of beautiful letters who can also strip subjects down to startling fundamentals. The metaphors for the differences between single tragic deaths and mass catastrophes will stick with you forever. I reread the book after the Japanese tsunamis and I suspect I'll look at it again soon. Not my original copy: that I left on a plane after I'd started writing poetry in it, so someone out there has a copy that's plus/minus my interstitial poems.

The summary of For the Time Being on Amazon is excellent, and will tell you if you're interested if my words have not. 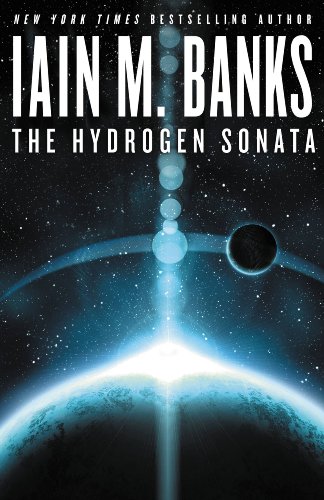 The Hydrogen Sonata, by Iain M. Banks
Banks' last Culture book is about a civilization figuring out how and if it's going to transcend. It's also about a musician and the instrument she carries that's devoted to attempts to perform a single impossible piece. I've had other Banks fans tell me they didn't like this book that much, but I love it, and some of its observations are right up there with Dillard, not to be forgotten.

If you can order from your local bookstore, do it.

And if you read on Kindle, The Hydrogen Sonata is on sale today as a Kindle deal.

Since Jonathan Tweet is temporarily between blogs, he occasionally posts on game design here. He's something of a minimalist so I added italics and boldface.

Here’s a list of my current projects, from a game that’s done and in the publisher’s hands to games that are just in the beginning stages of design. I always have several projects “live” at a time, although sometimes a single project takes over most of my schedule. Over the next months and years, here’s what you might see from me. Design complete: A science-oriented kids’ game with a new publisher. Largely complete: Sourcebook for a new publisher, offering a new take on a well-loved setting. Design underway: A new edition of Everway, where I can apply what the free-form roleplaying game design community has learned and invented over the last 25 years. Working with the Everway Company, comprising people I’ve known since Everway’s debut. Underway: Monthly 1,000-word essays about my history in RPG design, posted on EN World. Underway: Sourcebook for another new publisher, also offering a new take on a well-loved setting.  Underway: In the tradition of Grandmother Fish, another lovable picture book that teaches evolution science to pre-schoolers. Maintenance: Every year, I update the content of the game-design course I teach each fall through the University of Washington. Beginning stages: Head-to-head card game. Latest brain storm. Beginning stages: A story-oriented supplement for 5E with a new publisher. Beginning stages: Possible relaunch of a quirky trading card game from the 90s. Back-burnered: Non-fiction book, Jesus for atheists.

My Alphabet Prime playlist contains 224 (and counting) songs that at one point or another have been my favorite. Everything that comes up is worth hearing again. I can press repeat or just let it roll, knowing that I’ll like the next song just as much, though perhaps in an entirely different way.

I’m going to run the playlist in my blog, serialized a few songs at a time. If there’s a story that goes with a song, I’ll tell it.

I originally created the list working alphabetically by band, but it’s more interesting to move through alphabetically by song. I'm using links to videos, but in nearly all cases, my affection came from the music.

Best to say nothing and let this song’s lyrics rumble for themselves! They’re a Seattle/Tacoma group and haven’t released anything recently. The entire Mingle album is great.

So new to me I haven't gotten around to checking out her second album.
6 A.M. Jullandar Shere
Cornershop, Woman's Gotta Have It

The prototype of a song I listen to on endless repeat as I work or do most anything else. In fact I listened to it, and to its slightly longer variation, 7:20 A.M. Jullander Shere, for months while working on QA for King of Dragon Pass, and for weeks before that while designing a flawed-but-interesting Magic: the Gathering miniatures game. That was several years before getting hired at WotC. My design used the five mana symbols as die results that gave different commands to units (Red: charge, White: Defend) as well as activating powers. It was hugely baroque. At the time I didn’t know that simply baroque was too much. But it was the second game system I’d designed and the first from scratch, so the song has many powerful associations . . . .

An older tune, back from the years just after college, in my case. I got sick the night a friend had a ticket for me to one of her shows and if you're going to carry regrets, let them be about missed concerts.

Posted by Rob Heinsoo at 5:23 PM No comments: