Epic Spell Wars awards victory to the first player to win two Last Wizard Standing tokens. But playing with four or five players, it can take five to six games for the magic second win, and that’s too long a game for some people.
If you want to play a set number of games and come away with a definite winner, or you suspect the game may have to end early, try this variant rule.
Every time you play a spell (or use a treasure, however you do it) and knock a rival wizard out of the game, you win a Kill token. One spell kills three enemy wizards? That’s three Kill tokens. If the game has to end before someone has won two Last Wizard Standing tokens, break the tie between people with one LSW token apiece by counting Kill tokens. If that’s still a tie, heck, I say let them tie. (Haven’t had a tie yet…)
The play pattern shifts a bit in a good way. Players recognize that getting a kill may end up helping them win, so there is more point to going out in a blaze of glory.
You don’t score a Kill token for taking yourself out, but if you can take yourself out you prevent a foe from getting the kill.
Posted by Rob Heinsoo at 3:14 PM No comments: 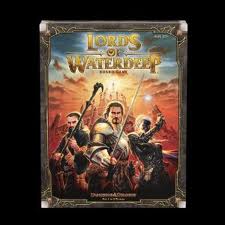 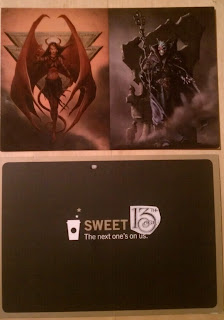 Yesterday morning I decided to take advantage of the buy-15-and-you-finally-get-1-free card I had from Starbucks. I rolled on down the hill to the drive-through, made the order, pulled up to the window and reached for the postcard where I'd thrown it in the passenger seat. "That's odd," I thought. "There's a 13th Age postcard in here. I thought I only had one of those.  Great! It must have fallen out of Jonathan's stuff and Lisa found it when she cleaned the car." The card was something we put together for Jonathan when he was on panels at Norwescon. The wonderful art by Aaron McConnell and Lee Moyer shows two of our evil icons, the Diabolist and the Lich King.
Beat. Beat. Beat.
"So where's my Starbucks card?"
Beat.
"Oh."
Yeah, I was a few sips of caffeine shy of firing on all neurons and I'd grabbed the wrong treasured postcard from the special spot behind the Fokker DR-1 triplane model on my desk.
So as I floundered for my wallet to pay for coffee with a Starbucks Gold card instead of a postcard, I told the barista I'd grabbed the wrong card.
"Well that looks really cool! What is it?"
Turned out I could  *almost* have traded the 13th Age postcard for coffee. The barista and a friend working beside him play a lot of tabletop games, mostly Pathfinder and Warhammer. Next time I'll find out which Warhammer armies they favor.