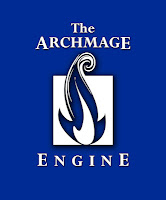 One thing I've loved about helping design the Shadowrun: Crossfire game has been getting back in touch with the Shadowrun universe. SR's mix of orcs and Uzis and Kurosawa-tinged street noir is good for fun. I've enjoyed what I've read of the upcoming Shadowrun Fifth Edition from Catalyst and that got me wondering about what 13th Age and its OGL mechanics, the Archmage Engine, could contribute to a Shadowrun game.

The first answer is the icon relationship system. But in SR, the powerful entities that shape the world aren't icons, they're corporations.

Start with the Big Ten, Ares, Aztechnology, Renaku, Saeder-Krupp and the rest. Add other corps as possibilities if that suits the GM's intentions for the campaign or a players' roleplaying input, provided the GM is comfortable going with it. Heck, add 3 and make me feel all fuzzy with the number 13, but that's a grace note.

Conflicted relationships are still roleplaying hotness. Negative relationships will be more common and are great for temporary alliances against a corp or inside information left over from previous conflicts.

In SR, you'll want to take advantage of the fact that the corporations are huge, with tentacles and limbs twitching everywhere. A relationship point is likely to represent contact with a specific person or net-entity or a sub-grid or a marketing contractor or a freelance assassin who needs to take someone out and maybe you can help. That's important because it's hugely likely that the PCs are going to end up making runs against targets they have a better-than-negative relationship point with. In SR, it's all about deniability and triple-crosses. 13th Age's fantasy plays it much straighter, loyalty is loyalty and a positive relationship might carry weight with a great many people connected to an icon. But SR is never that clean and even people who would prefer to treat you decently may be forced by their day job to call in the attack drones.

I'll be curious to see whether this makes sense in an actual SR game. I'm not sure whether it integrates or supplants contact/connections mechanics and what's being brought in with SR5. I'm pretty sure that the Archmage Engine rule that rolling a 5 on a relationship roll is good for the character AND good for the GM applies splendidly to interactions between shadowrunners and corporations. Simplicity might suggest trying it as its own mechanic instead of crisscrossing with other systems.

And speaking of criss-crossing, we only had 8 pages that needed revision from the 13th Age proofs today. The printing process is moving. Those who want to pre-order 13th Age game to get the PDF now and the print copy as soon as it's ready can follow this link for details on the Bits'n'Mortar implementation for the game, or order directly from PelgranePress.com.
Posted by Rob Heinsoo at 4:05 PM