The Monster Art +13 contest we ran after the 13 True Ways Kickstarter had one entry that I discarded immediately. It was from Christoper Tatro and it read like so:


Ever see a dog in a stand-off against three larger animals it doesn't quite know what to make of, like turkeys or goats or something outside its realm of experience? How it crouches its front end down and growls, its back end still raised and ready to spring or run? And the other animals just look on unphased and unimpressed?

That, but with a tarrasque facing down three Koru Behemoths, in a clearing with a nearby forest coming up only to about belly-level for scale.

I laughed. Christopher wanted his tarrasque and he wanted it with Koru Behemoths on top! He'd only forgotten the part that said that one of the Koru Behemoths was swinging an aircraft carrier as a baseball bat.

My first reaction was because I'd decided to avoid illustrating any Behemoths for awhile, to let people's imagination carry them wherever they wished . . . a plan that pays off with great fan art like the piece done by Temporalpyradox on the Impossible Forge tumblr. Also, Ken Hite was already going to run the tarrasque in the 13th Age Bestiary, and I didn't want to horn in on that action.

But the more I thought about the image the more it appealed to me. And I remembered our guiding principle that showing off one flavor of Behemoth meant nothing about all the other flavors. So I asked Aaron McConnell what he thought of the illustration, implying that I thought it was crazy. And of course Aaron said, "Oh, I don't know. It sounds kind of challenging. I could get into that."

So here you are. I'm showing the rough draft of this two page spread though the final may be somewhat different. There are going to be more elements that show scale, there are going to be more features and carapaces and such on the behemoths, maybe small changes to the tarrasque. I think of this look for the Behemoth as moving forests, probably more connected to the High Druid than others.

And yes, the tarrasque will appear first in the Bestiary, with a great writeup from Ken. Jonathan and I will find some other Way of the Tarrasque in 13 True Ways. 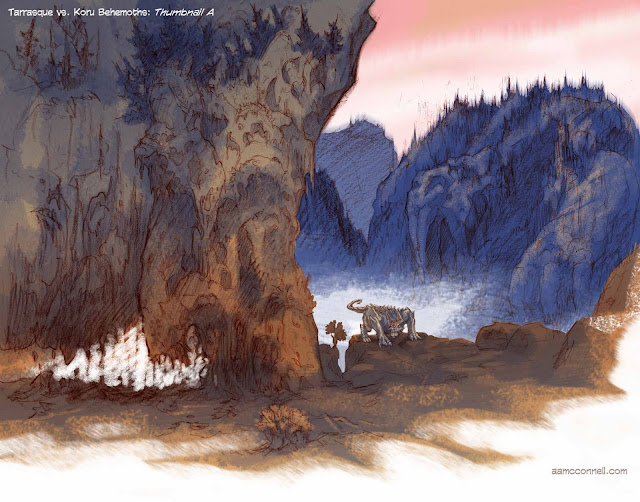