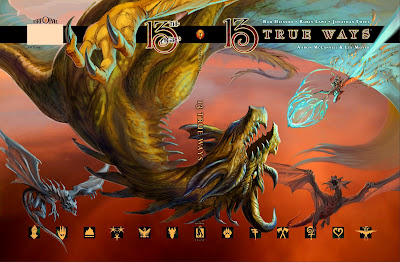 1. The cover above is our first rough draft. Aaron and Lee still have lots of work they plan to do on it. That's a wind-and-lightning powered druid fighting a dragon who has yet to be revealed. It gives us game designers something to strive towards.

2. Lee calls the piece Over Drakkenhall. I love the name, partly because it reminds me of the WWI airplane battles that were my entry into gaming playing Fight in the Skies/Dawn Patrol. I guess I can confess that my slang for the cover-dragon is 'the Bloody Red Golden,'but don't worry, the story behind this has everything to do with Lee's/Aaron's art mixed with the sorcery of the Blue and nothing further to do with WWI ace jokes.

3. On other 13 True Ways work, Lee and Aaron continue to roll through the art, Robin Laws has turned over great work on devils, Drakkenhall, and Axis, and Jonathan is carving his own twisty multi-icon passages through the ruins of Drakkenhall.

4. While Jonathan, Aaron, and Lee press forward on 13 True Ways, I'm using my designer-head for a few weeks to help with the 13th Age Bestiary that Ken Hite has organized for Pelgrane. It's mainly designed by people including ASH Law, Ken, Kevin Kulp, Rob Wieland, Ryven Cedrylle, and Steven Townshend, with editing by Cal Moore. There are innumerable dangerous and quirky touches that deserve to be touched on in later posts. For now I'm developing monsters, improving mechanics and suggesting ways that the monsters' stories can dare more in individual campaigns.

5. And in regard to the book you've all been waiting for.... Once upon a time my page count estimates suggested we wouldn't have room to print the last chapter of 13th Age, the mini-adventure called Blood & Lightning. We said we would put the adventure on line since we couldn't fit it into the book. Well the good news is that I was wrong and the adventure does fit into the book. Last week, with the 304 page layout finished except for page xx's, Simon and I decided to add the revised Blood & Lightning adventure back into the mix. We've got a 320 page book now with no need for an adventure download and it looks like the decision is only going to cost us three days. So we'll have more good news soon, I think.