Night of the Blue or Off-Pink Death Save Ninja 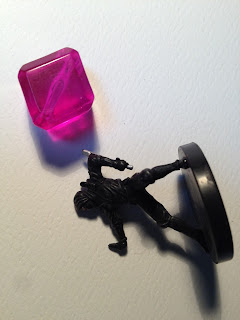 Last night's 13th Age session was even madder than usual. Three of the six players in the Wednesday night group were rejoining our campaign after finishing several weeks of a mad sprint to get a great new iOS game ready for submission to the Pax 10 contest. It was wonderful to have them back. But a day off from work had included, umm, celebrations earlier in the day that left one of the players flapping madly in the wind before the game night's drinking had even begun. So to frame the action around the table, the congratulatory note I got earlier this morning centered on having found a way to allow the boozled player to LARP as a Chaos Beast. Metaphorically true.

It takes me way too long to do full game write-ups, meaning that I end up not doing any write-ups. That's got to stop. So here are high points from last night's plucky attempt to deliver a centuries-old message tube to the Emperor, who in this case happens to be an Emperor who has been dead all those centuries. He's buried in a recently rediscovered Imperial Tomb and the Imperial Tomb Approach Paths appear to be experiencing dimensional turbulence, probably related to the destruction of the flying realm that warded the area. Behind the scenes, I was tinkering with dimensional madness because I've had the developed mechanics for chaos beasts and naga and drow to get into playtest in a hurry.

The Return of Luthan: Fehlauer had rolled up his one-armed wood elf fighter ages ago and then I'd placed the character sheet in a Very Safe Location that we hadn't uncovered for later games. His original ability scores? Ridiculously well-rolled. When he had to recreate the character (these were the days before electronic devices . . . . or rather the days before we got around to using them) I had made him reroll his ability scores. It didn't go so well. So yesterday the session returned to glory days for Mike, because I'd found Luthan's One True Character Sheet. Happiness is an overly competent mini-maxer reunited with his well-rolled stats.

Chumming My Dungeon: Early on I asked Lightner, playing a bard who'd rolled a story-die result with the Emperor, to go ahead and tell me what the name of the Emperor was who was buried in the tomb. As I was talking, I'd decided that although Emperors in this campaign had no name during their reign, The Emperor being quite sufficient, dead emperors gradually acquired a sobriquet that summed up their spot in the historical record. Without missing a beat, Lightner, playing the Intelligence-nerd bard, said, "Why, the Bloody Emperor. Of course."
"Thank you. Oh, thank you," I said.
"Chumming the dungeon!" chirped Lightner.
The table bursts out in all its voices, "How about the Generous Emperor? Or the Emperor of Incredibly Rich Funeral Goods? The Emperor of You Can Take it With You?" And so  on.

Reservoir Elves: At some point, approaching the gatehouse in the middle of the tomb path, I asked for a marching order. They spread the minis across the table. Six abreast. Everyone wanted to be in front. Well. OK. The immediate reference to Reservoir Dogs only temporarily lurched into Mr. Pink designations. Foreshadowing, there.

Hampered: At some point I told Fehlauer that Luthan was hampered, save ends. "Hampered! Oh, slightly dampish." "But placed carefully at the side of the battle." And it dissolved from there.
"Thank you. Thank you all. The book has gone to the printer, and you waited for the perfect moment to notice this term. Thank you."

Rumpled: The battle mat was just a tiny bit folded, mounding in a few rubber crests. Not enough to be a true problem, but it was fascinating to watch people decide that dice that were not favorable to them that happened to be sitting on a slope of any gradient were "clearly cocked." Rerolls occurred quickly. But really, I was hitting them hard in order to test nagas and some nasty drow, so the one-quarter cocked interpretation of the night was fine.

I'll Just Lie Here, Thanks: The elven rogue who plays like a ninja, Talimir, wasn't having the best session, partly owing to the player being smashed. Talimir got smashed too, but by a troll wearing the red and gold livery of an alternate emperor. So Talimir's player, Mark, kind of fades in and out of the building, getting up for air. Nobody healed Talimir the first round, so it's time for a death save. Mark didn't bring dice this time, grabs a die out of the pile and rolls. That's the result pictured above, though not the original location of the roll. Mark said, "17," pushed away from the table, and shambled into the darkness for awhile.
When the explosion of voices around the table had died away, I heard Sean say, "Well, Mark found a way to roll less than 1."
The Blue Cube of Zero is going to be a thing, particularly since Mark's usual yellow d20 has rolled so poorly for so long (original 3e playest) that we all know it as Old Yeller.
And yeah, in the daylight I can see that this bead isn't actually blue, but that's what it looked like in last night's bad light and it might be funnier to get the color wrong.
Posted by Rob Heinsoo at 2:57 PM