The Return of Three-Dragon Ante!

I've kept quiet for months, but the hatchling is out of the nest! The photo below is from W. Eric Martin's Board Game Geek report on this year's New York Toy Fair. 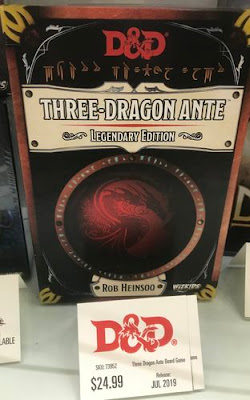 WizKids will be releasing Three-Dragon Ante: Legendary Edition later this year. I'm overjoyed to have the game coming back to print and I think both long-time players and newcomers will find something to like in this edition. I apologize for announcing the upcoming game without explaining more about its contents and intentions, but WizKids hasn't made the detailed product announcement yet.

If you're not familiar with Three-Dragon Ante, it's a card game of luck and skill that I designed to be something like Hearts in terms of complexity and playtime, though not in technique. In some respects, 3DA is the opposite of poker, since instead of folding out of hands, savvy players milk their cards for as many micro-rewards as possible, setting up later success. As an in-world game based on the iconic chromatic and metallic dragons, it's what heroes and other tavern-goers play for gold in the worlds of D&D, and you'll find it referenced a few places in the D&D Players Handbook.
Posted by Rob Heinsoo at 8:42 AM