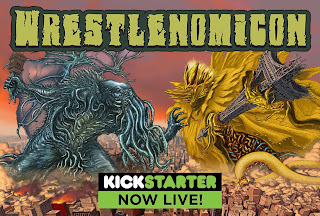 Arc Dream has announced our targets for adding new elder gods to the Wrestlenomicon Kickstarter! Actually Arc Dream announced a whole bunch of new stuff, including playmats, wallpapers and even a special card illustrated by John Kovalic!

Perhaps the biggest piece of the announcement is the plan for adding new elder god decks to the game. Cthulhu & Hastur made sense as the first to engage, but what's a cosmic battle between elder gods without the Crawling Chaos? The new gods will also come with rules for three and four player games. Battle Royale is grand melee style, every god for itself, or fight as a team. If fighting as a team feels too goody-two-shoes for you, there is of course an option for fighting each other after you've wiped out your rivals.

I've already designed the first draft of the Nyarlathotep deck. Same system that we used for Hastur and Cthulhu: Dennis and Shane supplied the names and I'm coming up with mechanics, though obviously we need the Kickstarter to fund and push through to the stretch goals before Kurt handles the art. Yog-Sothoth isn't as far along as Nyarlathotep but the first draft is in progress.

Here's how I summarize the new-elder gods.

Nyarlathotep messes with opponents by using Mastery cards that slam their own type of attack as well as their usual target. For example, Nyarlathotep's Bizarre Mastery card, Nyarly Don't Surf, slams Bizarre as well as Dominance. And while Nyarly's attacks and permanents slow the enemy down, Nyarly is busy building a pyramid of cards! Each attack that hits Ground Zero adds another block to Nyarly's pyramid. Cap the pyramid off, power Nyarly up,  and your enemy is gonna get capped.

Yog-Sothoth plays from two angles with twister cards that can use their Momentum to move its cards backwards on the track, looping all the way around to the lowest spaces near Ground Zero. Meanwhile, Yog-Sothoth has 'Groove Thang' cards (like When a Singularity & Matter Love Each Other Very Much, or Let's Smoke a Bowl of Antimatter) that mess with the enemy all the way down the track. Groove Thang cards generate random aggressions that are printed on Yog-Sothoth's Cultist cards. Trigger a Groove thang ability higher up the track (not at Ground Zero), draw a random YS Cultist, and find out what grooved.
Posted by Rob Heinsoo at 10:39 AM