Hastur vs. Cthulhu: The Home Front!

The Wrestlenomicon Kickstarter is in full swing with rules and DIY printable PDFs available in the first update for backers!

The campaign is structured so that most pledges add to either Cthulhu's coterie or Hastur's entourage. You'll find that Cthulhu is accepting allegiance on Twitter at @TentacleNecktie, with Hastur slightly in the lead at the moment at @EatYellowSign!

This Cthulhu vs. Hastur grudgematch has been playing out in my house for a couple years now, because my wife Lisa . . .
a) loves the game
b) was therefore willing to playtest it again and again and again during time when we were having fun hanging out instead of working
c) loves the art on the Hastur cards so much that she has a hard time playing Cthulhu, even though the straightforward Cthulhu mechanics are more her personal style. She plays Red/Black in M:tG, and Hastur is a bit more Blue/Black if we're gonna break it down like that. Lisa's Sense-of-Hastur helped keep the design on track when things got a bit too convoluted.

So Kurt Komoda's amazing Hastur art easily claimed its first victim. Lisa had never heard of the Yellow Sign, but she's an artist and a writer and Hastur had her number from the first stroke of its giant paintbrush. 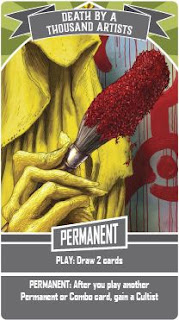 Me, I can't choose a side. I love all our children equally. If pressed, however, I'll admit that little Nyarly, waiting somewhere in the shadows, that kid has issues.
Posted by Rob Heinsoo at 12:07 PM