Last night we played four-player Three-Dragon Ante in two households. We played with Ann and Rob Dorgan, friends you'll find in the 3DA: Legendary Edition playtester list. Ann pushed past my qualms and we tweaked the game on the fly.

If you feel like playing 3DA across multiple physically isolated tables, here are some recommendations for a two-table game.

First, I think you need at least two players per table. The ideas that follow assume you don't have any single-player tables mixed in.

Tracking Gold
You're going to need to figure out how to keep track of everyone's gold across split tables. We dared to maintain the game's physical presence by creating stacks of gold for the players across the Zoom-divide and moving gold in and out of both stacks, banking for the players who weren't in the room. It worked, usually, but we clearly weren't entirely up to the process, the game is too distracting to perfectly track coin-movement for players who aren't in the room. So if we do it again, I'm going to vote to have a banker who will keep track of all gold, probably on a google doc or the like, though it could be on paper.

Gameplay
Unless otherwise mentioned, the normal rules work! (But tell me if you play and run into issues we didn't.)

Deck Preparation
Each table creates its own deck using the 70 standard cards and 10 random Legendary cards. Yes, the game could end up with two Druids, one per table!

Camera Set-Up
Set up the cameras and computers so that the flow clockwise around each table matches the positioning of the video of your friends in the far room! It needs to be obvious which players are on your left and right, everyone will have one side occupied by a player beside them and one side occupied by a player in the other room, unless a table has a third player sandwiched in between. 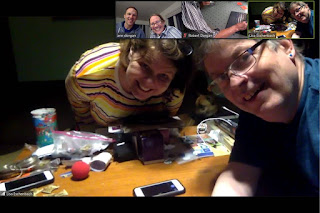 Strength Flights
Go ahead and let Strength flights pick up the ante cards at their own table, if any. If there aren't any left, that's too bad.

No Stealing or Gifting Cards Across Tables
The specific card power revisions below nearly always hinge on the fact that we aren't stealing or passing cards from one table to the other. A power that's going to steal a card from the player next to you at your own table can work the same as ever, but if the card would steal from a player in the other room, it's going to have a slightly different effect.
The card revisions that follow also apply to Legendary versions of the same powers.

Brass Dragon: If the player to your right isn't in the room, they just give you the gold instead of having the option to hand over a stronger good dragon.

Green Dragon: Same situation as the Brass. If the player on your left is in the room, they can choose what they want to give you. But if they're at the other table, they just pay you the gold. The Green Schemer's left-and-right version of the ability can end up with one opponent being forced to pay and one opponent getting to choose.

Red Dragon: If the strongest opponent is at the other table, they must discard a random card. Well, let's be clear: the opponent next to them chooses a random card from their hand and discards it, because that's more aggressive, like stealing! For fun, everyone sees the card that got discarded. And then you, the player who triggered the Red Dragon, get to draw a card and keep it secret.

Illusionist: Maybe don't play with this one!  This card is all about the fun of swapping Mortals and it's hard to swap across tables, so I'd say you should feel free to skip it, take it out of the game before you choose the 10 random Legendary cards. But if you do play with it, and are prepared to hurt your brain just a little, you could say that it works normally if you swap at the same table . . .and if you swap to the other table, then you all have to use your virtual reality parallel-thinking skills to swap the Mortals for the duration of this gambit. At the end of the gambit, the two Mortals go their tables' discard piles as normal, but for part of a gambit you were caught in the ill-uu-shee-on.