As a younger dude who hadn’t entirely grown into game designer boots, in mid 1996 I got a job at Chaosium as Greg Stafford’s right-hand man for publishing Glorantha. Positioned on the right-hand, I learned that neither the left hand, nor the checking account, nor the pockets, nor any other chunk of Chaosium, had money to pay freelancers for work they produced within, oh, maybe three years if all went amazingly well. So, my Glorantha work was mostly about shutting projects down.

But Greg’s dream was that Giovanni Ingellis and his company, Stratelibri, from Italy, were going to produce a Glorantha miniatures game. Stratelibri hoped to challenge Warhammer, go big or stay home. But it wasn't something we could start working on at Chaosium. Giovanni wanted to design our Glorantha game, that was his dream, and in return he would fund it.

So I dove into the world of miniatures gaming. I’d already been turned on to a clever ancients/medieval game called Armati by Jon Kovalic, of all people, who for a brief time helped put out an Armati fanzine. But I’d missed the brilliantly abstracted DBA (De Bellis Antiquitas, which I still love) and its wooly ancestor (WRG 7th Edition, which Charlie Krank & friends introduced me to in Charlie’s game garage). About the same time, Scott Schneider of Chicago introduced me to Great Battles of History, the GMT ancients wargame that plays a lot like a minis game with counters.

Closer to home in the Bay Area, Chaosium’s friend Dana Lombardy wanted to teach me to play Johnny Reb. I put him off for a little while. I believe I was thinking that a regimental American Civil War minis game wasn’t all that relevant to a supposed rival to Warhammer. 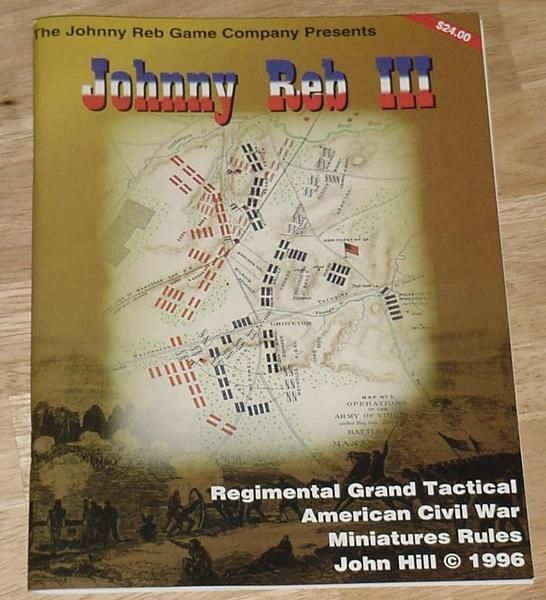 the rules at the time; these days some gamers prefer John Hill's newer rules, Across a Deadly Field

After work one day, Dana set up a giant battle (well, giant to me!) and we played for several hours. I'd played write-orders-then-execute-them wargames before, but Johnny Reb improved greatly on that model with face-down order counters executed in a timing sequence that created a dynamic battlefield. Dana was enthusiastic and helpful and wanted to help the Glorantha minis project take off. I remember the Johnny Reb game fondly. Which is ironic, because at the time I was nowhere near appreciative enough.

I was caught up in the strange dance steps of preparing to produce a game that I wasn’t allowed to think about designing. Greg was focused on turning out orders of battle for the various combatants in the Hero Wars, particularly the Lunar Empire. (Some of this work has recently resurfaced in Martin Helsdon’s The Armies & Enemiesof Dragon Pass.) Giovanni of Stratelibri wouldn’t talk about the Glorantha minis game until I visited him in Italy. I thought that was unhelpful, but hey: free trip to Italy!

Giovanni, someone I'm glad to have met

The trip was delightful, Stratelibri were gracious hosts and just meeting and hanging out with Giovanni was splendid in a life/historical sense. But the minis business rolled a fumble. It turned out that Giovanni didn’t actually have time to design anything new, he planned to re-purpose a quirky little cyberpunk skirmish system he’d created years earlier. It hadn’t really worked as a cyberpunk game and I didn't think it was going to work as a Glorantha game. I hadn't really expected to challenge Warhammer but I'd at least hoped to take advantage of Greg’s work on the military histories of Dragon Pass.

By the time I had returned to California, Giovanni had regretfully pulled the monetary plug because of a) problems with Magic: The Gathering; b) store expansion plans; c) knowing the Glorantha project wouldn’t work; d) choose your own adventure. That was when nearly everyone at Chaosium got laid off thanks to the Mythos over-printing disaster.

But back to Dana. He was on hand, helpful, and would have been one of the best people in the world to talk with about miniatures and wargame design. I stumbled along without recognizing that Dana’s presence in the project was a lucky penny that I should have flipped many times. On the bright side, my mistake wasted less of his time than if I'd understood what I was doing.

You can find links to Dana’s doings here. If you grab a copy of Green Ronin’s wonderful 100 Best HobbyGames, edited by James Lowder (now of Chaosium!), Dana wrote up Johnny Reb on page 157.
Posted by Rob Heinsoo at 2:58 PM