Working on a bunch of 13th Age stuff today, so this BTiLC preview is going to be quick and self-indulgent, introducing two of my favorite villains from the set. They really are Monsters, the villain group associated with the worst of the Masterminds, Ching Dai.

I liked these two all  during playtest and I think they'll be fun in widely-recruiting games of Marvel: Legendary. When I saw the final art I was even happier, probably my favorite pieces, oozing personality. 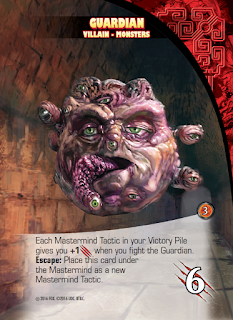 I think the Guardian lives up to its on-screen appearance. It's a villain card that has a markedly different impact at the start of the game compared to the end of the game. At the end of the game, it's a quick 3 VP, especially for a player who has already been doing well. But if the Guardian shows up early, there's a decent chance it's going to escape and force you all to beat the Mastermind an extra time, and that one of your all-in efforts to beat the Mastermind is going to be rewarded with the googly-eyed booby prize of a Guardian card that's only worth 3 VP and doesn't do anything worthwhile for you as a Fight effect. 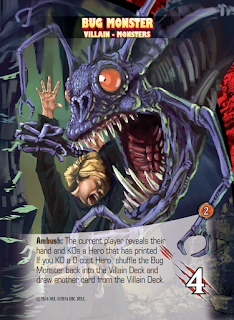 The Bug Monster is a one-card game dynamic! When it shows up at the start of the game, you're saying, "Thank you, thank you for springing out of nowhere and eating one of my lousy Chang Sing Warriors" (or maybe a Mediocre Hero like the Jerk . . . ). But if it does you the favor of eating a hero you can afford to lose, that's not the end, it gets shuffled back into hiding. The more of your 0-cost Heroes you get rid of, the closer you are to losing a Hero who matters. Eventually the Bug Monster gets a happy meal.