Towards the end of Big Trouble, the evil sorcerer David Lo Pan orchestrates a prenuptial kung fu exhibition and magical survival ritual for his two green-eyed brides. Am I the only one who thinks that when Gracie Law and Miao Yin float down from the burning blade, they should have learned martial arts?

Upper Deck arranged that we could add a touch of new content where it felt right, so I added green-eyed brides with legendary kung fu! Each of these cards appears once in the set, they're the rares for Gracie and Miao Yin. As you'll see, they also tie in to the two themes I talked about in my earlier design previews. 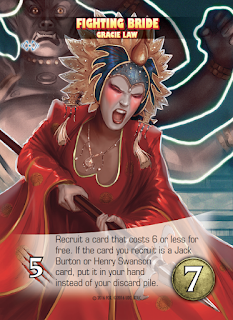 Fighting Bride is an example of the way the heroes of this set interact with each other. Gracie is into Jack Burton so much that she can see through his dumb glasses and hold onto him even if he's in his Henry Swanson guise. . . and yes, Henry Swanson is another of the game's heroes. No Jack? No Henry? Or during the Showdown when you can't recruit? Fighting Bride will handle the situation herself.

If you're wondering what the Energy symbol is doing on the card, you *could* imagine that her kick-ass kung fu spear is shooting fire! Or you could stick with this set's definition of that symbol as Magic. When Big Trouble characters have the blue symbol, they're dealing with Magic, but it still works fine to interpret it as the Ranged class when bringing in Marvel heroes or mixing the sets.

Certainly Gracie works better when played with the other heroes in this box instead of mixed with the general Marvel population. Playing by the letter of the rules, the Villains and Schemes and Bystanders in Big Trouble fit optimally into games built using the entire random cornucopia of Marvel cards. But if you want to script your own variation on the films, you *could* propose an alternate timeline in which Jack Burton isn't around to be Gracie's bad-boy love interest, but someone like Wolverine is! 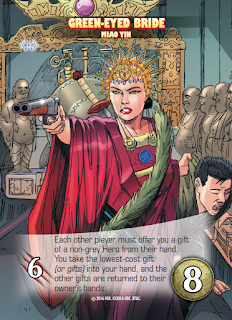 Miao Yin's Green-eyed Bride is an example of the other design theme I talked about in the first preview, compelling player interactions. Everyone else needs to choose a gift. So do you gift high, figuring other players will go cheaper? Or do you go low to make sure you can afford to lose the card? If the lowest cards tie, the tied players all lose their cards and the Green-eyed Bride has a wonderful wedding party. And speaking of happy wedding parties, this was a card that my blue-eyed wife Lisa suggested the final version of the mechanic for! If the card causes you strife at your gaming table, try to remember that it was made with love.
Posted by Rob Heinsoo at 2:05 PM