Last Friday, ASH LAW and I were working on our new 13th Age project in my garage studio. (And no, the new project is not announced yet. Soon!) I cursed because I wanted to look at the commander for a moment in a printed copy of 13 True Ways instead of rummaging through the PDF, and of course that wasn't possib. . . . . wait a minute. "I've got a printed copy," I said aloud, atoning for my cursing. There, in the folded cardboard on the gaming table . . . the printer's proof of 13 True Ways.

So I got to flip through finished pages to see what I needed. It felt great. 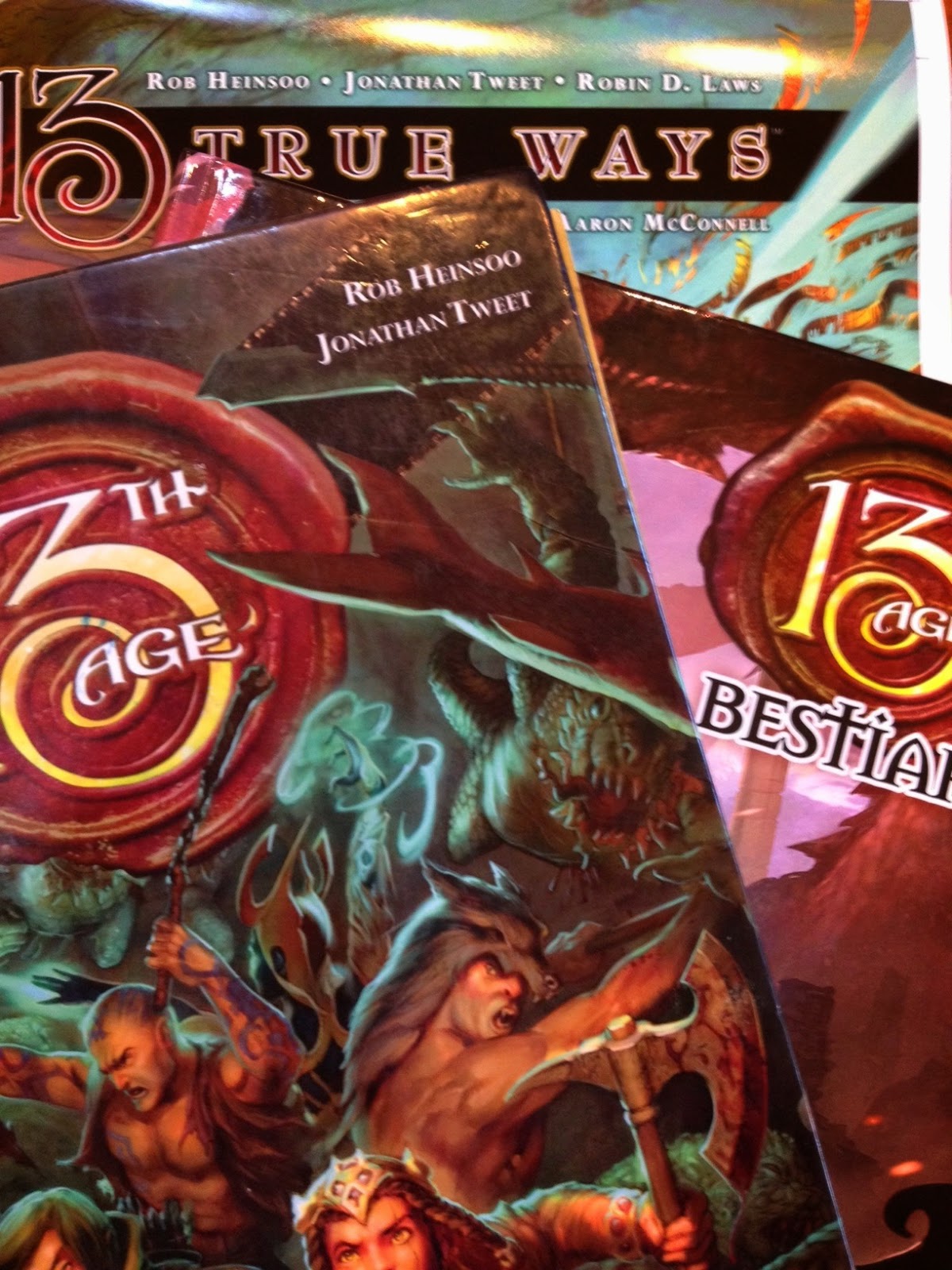 And then I stacked the proof beside the 13th Age Bestiary and the core book and had to admit that it looks like we've got a player's book, monster book, and GM's book, a product scheme we originally avoided by presenting 13th Age as a single all-you-need-to-play volume.

The appearance of a trilogy is probably a good thing. But I have to say ours is a bit different than the traditional player/monster/GM scheme. Our approach is a lot more like the old Arduin Grimoire and its follow-ups that started with Welcome to Skull Tower.

The 13th Age core rulebook sort of qualifies as the player's book, but it also has monsters and treasure and a geography chapter and a sample adventure. The explicit goal is to help players contribute to the story of each unique campaign. The hidden goal is to get players excited about the campaigns they might be able to run themselves, slightly increasing the number of GMs in the world . . . .

The 13th Age Bestiary definitely qualifies as a monster book, but we deliberately let each monster tell us how it could accomplish the most for the game instead of forcing the work into a monsters-only-please format. Frost giants have fimbulwinter environmental effects, chuuls spawn usable magic items, and the fungaloids are hiding a flipping playable PC race. (And yeah, those examples were all ASH's way of adding value!) The unique voices of our many contributors came out stronger because we didn't force authors to force monsters into cookie-cutter boxes.

And then there's the newest book, approved but not quite printed. The setting material and deviltry advice and mini-adventures in 13 True Ways help GMs, but six new character classes and the multiclassing rules and other goodies make it a player's book as much as a GM's book. Our goal with 13 True Ways was to do all the coolest things we could think of, so it's an Emperor's Kitchen Sink book instead of a focused GM product.


Publishing Schedule...
So far as we know, 13 True Ways should be available in print at GenCon. We're planning to drop-ship pre-orders and Kickstarter reward copies in early August direct from the printer. Those shipments will be books only, the various KS extras (and the deluxe leather-bound copies that need bookplate signatures) will be another shipment later. The hope is that most KS backers in the USA will have their copies before GenCon. There are going to be other logistic details to sort out but I won't personally be the person doing most of the sorting, so I'll wait until I know more before saying more. I can say that long-waiting Kickstarter backers will certainly also all be getting another small treat, in part because we feel bad that backers outside the USA aren't likely to have their copies before GenCon. Like all printing and distribution plans, this requires things to stay on track. So far the process has been smooth.