I read two good books in the last couple weeks, both by authors who started their careers along different tracks. 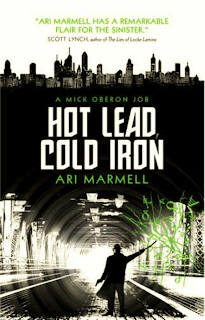 Ari has been writing novels for a few years now. If you read one of his early books, but nothing since then, I'm happy to say that Ari has gained several levels as a writer. I say this as someone who set aside one of his earliest novels after being jarred out of the story by problematic sentences. But that's no longer a problem. Sentence by sentence, Hot Lead, Cold Iron is smoothly written and great fun. The urban fantasy twist into the world of faeries worked for me, the plot stayed interesting, and I'm looking forward to the sequel.

"ROBERT": You knew that Robert Galbraith is a pseudonym for JK Rowling right? Word got out. The Silkworm is a sequel to The Cuckoo's Calling. I eventually liked the Harry Potter books, though I still haven't gotten around to reading the later books in that series. I'm extremely happy that Rowling has moved on to writing adult mysteries. I understand why she wanted to pursue this new direction writing under a pseudonym. This work is excellent and deserves wider readership so I suppose it's not such a horrible thing that the secret leaked.

I liked The Silkworm more than the first book in the series, in part because of its handle on the psychology of the main characters and its accurate assessments of how the same events are different for women and men. That character development started in the first story, and in any case it's well worth reading The Cuckoo's Calling first.
Posted by Rob Heinsoo at 2:39 PM