Many Trumpets: this week in 13th Age

Early in the week, Pelgrane sent out an update of the 13th Age Bestiary's Hatchling Edition to those of you who have pre-ordered it. If you haven't pre-ordered it, now may be a good time, because Simon's note about possibly increasing the price later isn't getting any less likely with me dropping the couatl into the book and adding at least three new monsters (one fungaloid, two jorogumo).

A day or so later, ASH LAW sent a short seasonal adventure out to the 600+ groups participating in 13th Age Organized Play.  600 groups!  ASH did some cunning work here that I'm planning to adapt into an-entirely-different campaign. 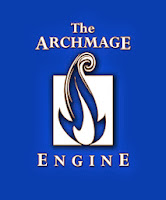 Yesterday the new Page XX from Pelgrane announced the release of our Archmage Engine SRD. Thanks to Chad Long and Cal Moore, it turned out very well. Apparently some people worried that it would be a fakey-SRD, but the point of doing 13th Age as an OGL game was to get people playing it and using the system. Yes, it's a real SRD, and it should prove useful to people looking to overlap with our game engine.

On 13 True Ways, Jonathan and I are running our Daily Workplace Simulator experiment at my place. Playtesting of the commander went well and I'm processing feedback for the commander and the monk to get new versions of these two classes ready for external testing. Discussion of all the other new character classes has led Jonathan to dig into work on the occultist. He has surprised me with an entirely new type of spellcaster. I'm not using the words 'new type ' lightly, I don't think these mechanics have been tried before. I'm simultaneously excited to have Jonathan working directly on character class design and scared because I'm the GM in the group these days and this occultist is going to spring occasional reality-wrenching ambushes on whoever wears the GM-cap.