When the 13th Age Bestiary updated *today* for people who purchase the Hatchling Edition pre-order, there was a special treat. Yes, this time the 220+ pages of the Bestiary includes all 52 of the intended entries instead of accidentally leaving out the couatl. Special!

The couatl dodged the first Hatchling Edition because I'd created the monster outside the book's standard process. I wrote the couatl in the middle of the project when we needed a replacement creature. I sent it along to the editor instead of sticking it in the pool with the other submissions and only noticed after our Hatchling broke out that we were one couatl shy of a full nest.

It wasn't that long ago that I asked Robin Laws for a new story for D&D's couatl when I was leading the design of the 4e book WotC called The Plane Above: Secrets of the Astral Sea. Robin's couatl were all about status competition and serving as patrons for adventurers and would-be-heroes who they pushed on to greater heights or deeper dangers. And also: brilliant cloud-palace ziggurats.

My new take on the rainbow flying snake could incorporate Robin's couatl story if you choose that route for your campaign. But most of what I've written hinges on elements unique to 13th Age, such as the icons. There are probably also traces inspired by my recent re-exposure to the mysteries of Shadowrun's dragons. In the words of the opening flavor text: Some monsters exist to fight, to feed, to dominate, or to destroy. Couatls exist to remind the icons that reality may be more complex than what they’ve made of it. If your 13th Age campaign is getting anywhere near epic tier, or if you enjoy monsters that shake up what everyone else considers reality, you're going to want to check out this couatl.

Below, Rich Longmore's take on what a couatl looks like on first glimpse, when it's flying traditional rainbows instead of iconic colors. 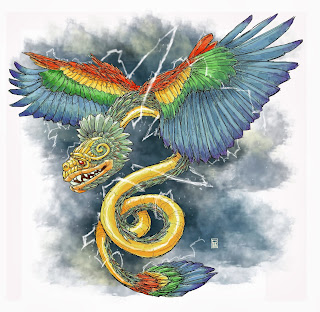