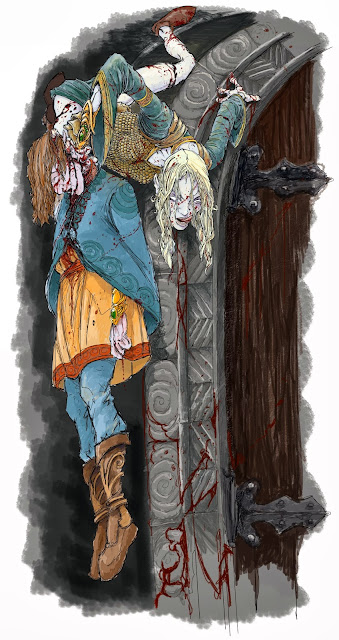 Everyone else seems to be decorating for Halloween so I thought we'd meet the holiday on the threshold with a horror-tinted monster preview from the 13th Age Bestiary.

The dybbuk is a creature from Jewish mythology. The version ASH LAW designed takes just as much from Japanese and Korean horror films. Rich Longmore's art nailed the fantasy/horror crossover.

The Dybbuk Legends section is a good example of our approach to the half-created world of 13th Age. We provide multiple interesting options and trust each GM and their players to come up with the ideas that make for the campaign's best story. The half-created world completes its creation in each separate campaign.

The Dybbuk Possession section might spark weird horror-haunting stories or it might just go into the background as an explanation of what's going on when dybbuks aren't actively possessing someone like the poor elven priestess shown above.

The I Cast Thee Out! sidebar touches on the fun mechanical twist to this monster. If you hit it with holy attacks, there is a chance of blasting the dybbuk out of the body it is possessing. That's the good news. The bad news is that the dybbuk becomes an undamaged higher level ethereal dybbuk that will wreck your souls. Fortunately for some PCs, the ethereal dybbuk can't maintain its presence in the world without its host, and fades round by round, so just . . . hold . . . . on . . .

We'll let you find the current mechanics for yourself when you buy the finished book or pre-order the Hatchling Edition from the Pelgrane Press online store.

Possessing ghosts, demonic intruders, or alien visitors. Who can say for sure?

Dybbuks are blown about by spectral winds no one else can see and must cling to people and objects. Spellcasters and others who have more spirit vision than most occasionally see dybbuks clinging to the sides of buildings like fluttering flags or desperately clinging to the shoulders of animals and people like shadowy capes. Characters who can see the other-world will mistake the translucent shade of a dybbuk for a trick of the light unless they make a DC 30 check.


Once a dybbuk finds a host it wishes to possess, it anchors itself to the victim’s body. Thereafter it lives inside its host’s physical shadow and is no longer buffeted by other-world storms. Over time the dybbuk warps the mind and body of its host, and eventually inhabits it entirely.

<<insert sidebar>>
I Cast Thee Out!
Using holy damage on a dybbuk possessing a corpse (a corpse dybbuk) or a living victim (a parasitic dybbuk) can force the dybbuk to leave that body, but it produces a new, slightly tougher monster. Thankfully, the ethereal dybbuk fades away after a short time, because it can’t maintain a physical presence in the world for long without a host. Exposing a dybbuk to holy water or dragging it onto holy ground might have a similar effect, or not—that is the GM’s call.
<<end sidebar>>
Posted by Rob Heinsoo at 3:31 PM