There are nine character classes in the 13th Age core book. Four new classes are definitely appearing in the first expansion book, 13 True Ways. Two more classes, the battle captain and occultist, could be added as stretch goals for the Kickstarter.

It takes a lot of work to do a new class right, particularly when we’re also committed to handling multiclassing. I suggested the two new classes as stretch goals for 13 True Ways because they would make the book into something bigger and better than I could have hoped.

I’m going to say a few words about each class that appears (or might appear) in 13 True Ways, three at a time. Let’s start with the battle captain, chaos shaman, and druid. 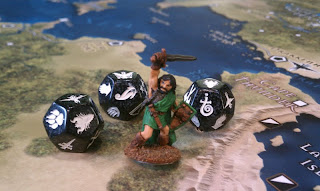 Originally Jonathan and I were planning to let the bard fill the role of “healer who gives people orders.” But obviously bards are more than that. And the warlord’s approach to commander-style healing seems to resonate with many players. So I started thinking about how we’d do the mechanics for this type of class in 13th Age. I came up with some answers I liked, at which point it seemed obvious to add a warlord-style character to the list of stretch goals.

Who remembers the marshal class that appeared in the Miniatures Handbook that Jonathan and I helped design for 3e? Hand that gamer the ancestral badge of obscure discernment. The marshal was an important antecedent for the warlord. I’m not saying the battle captain is going that route. But I thought I’d mention that the warlord wasn’t the first commander in the squad. Definitely the first martial healer commander in the squad though. I imagine that adventuring parties led by a warlord would have a bit of trouble going back to a marshal: “What do you mean that you can give us orders but you can’t let us heal? Arrgh!” 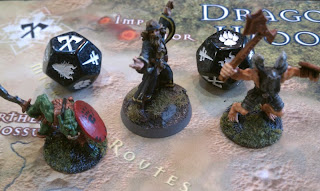 I’m fond of occasionally random mechanics. This fondness can be a strength when I figure out how a particular section of the gaming audience isn’t being served by mechanics that are too cut-and-dried. It can be a weakness when I let randomness get in the way of actions that should be straightforward. Well, the chaos shaman is going to be an unapologetic class for people who prefer to play on the ragged edge of WTF instead of the cautious curve of well-ordered priorities. It’s likely to present a very different way to play. Some people will love it. Others, not so much, which means part of the design challenge is to make sure that people who don’t want to play a chaos shaman have no problem playing with a chaos shaman.

In the story of 13th Age, the chaos shaman is a tradition of magic kept alive by the High Druid and now invigorated by the reappearance of the Orc Lord. Classes that make more sense of connections with problematic icons are part of what 13 True Ways is about. You may not need to be a half-orc to be a chaos shaman, but it might help. 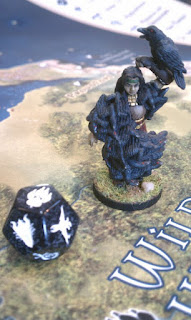 It killed me to have the High Druid as one of our thirteen icons and not be able to get the druid into the original book. But my design goals for the druid were a bit too ambitious to be finished working in the initial phase of this project. We needed to nail the system down before mastering the stunts we hope to  pull with the druid. We’re tinkering with themes that have always been in stories involving druids but haven’t shown up in druid class mechanics. I’m happy to get a chance to take a deep breath, go over the whole thing with Jonathan, and carve the druid into shape.

[[About the art/minis in this post: Richard Bark painted the battle captain; I think it may be a Glorantha mini, but I’m not certain. // I’m also not entirely certain what the chaos shaman is going to look like, it will be fun to work that out with Aaron & Lee. So I chose three minis that might triangulate the chaos shaman concept. The two on the flanks are also painted by Richard Bark, Peter Lee painted the Ral Partha magician in the center. // The druid mini is the Ravencloak Visionary that I wrote the art suggestion for in Dreamblade. Perhaps it was tacky to set myself up with a mini I knew I wanted but couldn’t quite get created through D&D Miniatures. Logan Bonner offset the tackiness by painting the mini up for me to game with, the original is monochrome.]]
Posted by Rob Heinsoo at 5:40 PM