A Song for the Elf Queen 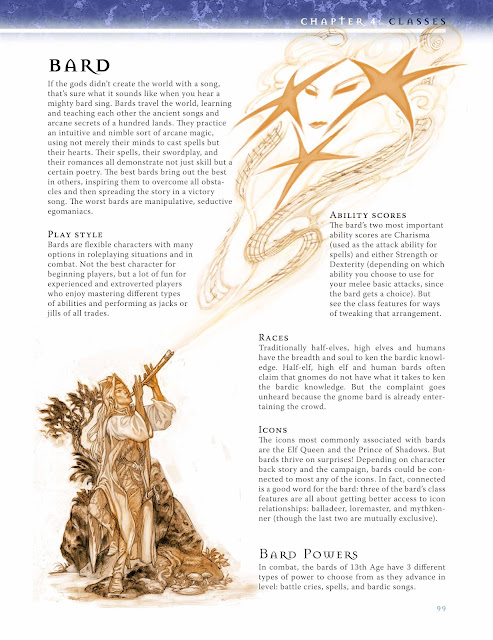 I wrote a few lines on gaming art that appear on the wall at the Art of Roleplaying Games exhibit at Krab JabStudio.

Before I was a gamer, children’s books and historical illustrations sparked my sense of wonder. I spent hours daydreaming over favorite paintings, imagining that I was canoeing through a lushly textured Maine swamp (The Summer Folk) or landing on the beach beside the Vikings (Time Life History of the Ancient World).

Not surprisingly, gaming eventually absorbed some of my daydreaming time. But I still daydreamed over gaming illustrations, putting myself into the adventuring party outside Morno's Skull Tower when there was no one to join me at the table.

When I’m writing art suggestions for games, I imagine that a kid somewhere is going to daydream their own solo game through the pictures that result. Dense possibilities, many entry points, active magic, mysteries—these can all matter as much as what’s supposedly the focus.

I've loved working on 13th Age with Aaron McConnell and Lee Moyer because we’re creating dense and daydream-worthy art. Take this sample layout (using old text) from the bard character class as an example. You can see from the way I wrote the art suggestion that I wasn’t sure the piece would come off. Getting fully successful magic effects that match your own vision from a talented artist whose vision is probably on its own track? It’s tough.

Icon Notation
Possible high concept illustration.
The point would be to show an elven druid playing a musical instrument.
The notes are visible magic coming out of the instrument.
Some look like classic musical notation.
Others look like stars joined by the Elf Queen’s face.
This would fit incredibly well with the game mechanics. Don’t know if it can be done.
Could be small or large as Aaron desires.

Icon Notation turned out better than I dreamt. It’s beautiful, it flows, Aaron used the full-page instead of piping small, and it’s a perfect 13th Age illustration of a bard using the Balladeer talent to sing the praises of the Elf Queen. This partnership has me excited about finding new (or simply wonderful!) ways to illustrate fantasy tropes. I’ll show some more samples of Aaron and Lee's work on 13th Age before the 13 True Ways Kickstarter is through. I’m hoping that the Kickstarter works and we’ll be able to create more active magic. http://bit.ly/13TrueWays