The Face in the Frost, the gang from the tube 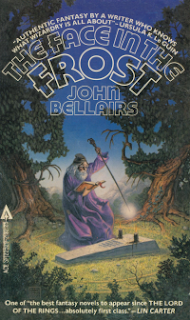 I finally read John Bellairs' The Face in the Frost last week after owning and ignoring the book for decades. Why did it take me so long? Maybe glancing at the book's cartoons as a youth turned me off for no good reason other than being tired of reading about friars and monks. Not much of a reason, but that could have been it, and when you have a book forever it's easy to forget that you could get around to reading it instead of finding something new.

John Rateliff reminded me of the book's existence a couple years ago when we were talking about the history of fantasy for the permanent Fantasy exhibit at the EMP. Then a couple weeks ago, reading John's review of an Ursula Le Guin talk he attended in Seattle, I was reminded of The Face in the Frost again, a connection that made sense when I pulled the book out of a downstairs shelf and found Le Guin's admiring quote on the cover.

The Face in the Frost reads quickly and still feels substantial. The story has held up remarkably well for a fantasy written in the 60s. It's quirky, it's charming, it's dead-scary serious. I liked it a lot.

As I was reading the book last weekend, pressed to the glass of a door on Seattle's light rail train, there was a moment when reality and The Face in the Frost darted past each other. In the book there's a confrontation with a shouting wizard during a crossover between worlds of fantasy and the world we know as real. On the Seattle light rail a heavyset Filipino man burst out of his seat and shouted down an older African American man who had been talking quietly to someone else in a seat a couple rows back. "Hey! F*** you man! I'm a member of the Sons of Anarchy! I'm sick of people disrespecting us!"

"Alright, man, alright," said the older guy, slipping out of his seat and out the train's door, which had luckily just opened at a stop in a south Seattle tunnel.

I took a few seconds to watch as the ranting gang-man stalked back to his seat. I turned back to the war of magic in my book. Then I tried to connect the dots in the real world scene I'd just half-witnessed. I thought the Sons of Anarchy was a TV show about a fictitious biker gang? Who, if anything, really piss off the Hell's Angels? So this would have made a lot more sense if he had been yelling that he was a Hell's Angel. Which he didn't. Which means this guy a few seats down identifies himself as a member of a television biker gang? Oh. He's really crazy.

Or have the Sons of Anarchy crawled out of the tube and turned into a real gang in Seattle? Which is also crazy, but it's socio-cultural crazy involving the blurred line between tv-shows and and tv-reality-shows instead of just personal batshit crazy. No answers, unless I wanted to move up a few rows and ask the Son of Anarchy about his gang affiliation. So I went back to my fantasy book about blurring lines across malleable realities.
Posted by Rob Heinsoo at 10:36 AM